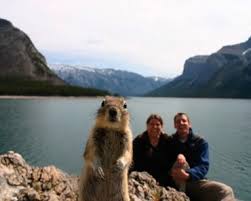 After alarming details about demands for ‘donations’ by cash-strapped Welsh universities were revealed by The Eye, Edwin Phillips is with two disheartened academics (A1) and (A2) warning of the future.

We’ve already asked our past students for those donations we always need to pay for the gleaming new buildings nobody wants.

Telling people to “Raise (money) as you shop” and instructing them how to “Create fundraising page”.

We’ll get even more emails from the VC asking for us to think of ways of making money after that Brexit nonsense.

Last week it was holding tea parties and dressing up as a clown.

(Muttering) I’m sure the students say I do that already in my lectures.

A2:  (Sighs) yes – did you see all that stuff in The Eye about the controversies at Aberystwyth University?

Those poor buggers are facing redundancy even after they opened that absurd campus on Mauritius.

When he was ‘acting’ VC John Grattan let the cat out of the bag.

“I won’t hide it from you that Brexit poses a challenge to the university”, he told students during a graduation ceremony.

(Under breath) he obviously didn’t realise you are not meant to say anything in those things – just dish out the degrees, say a few bland words about welcoming the students to the university, and then they can all leave with their parents.

Just as well The Eye keeps us abreast of things – even if our bosses call them ‘vexatious’.

Yes (starting to grin) still those bosses can all go to the tourist island where Aberystwyth has got that ridiculous campus.

They can think of more fund-raising gimmicks there.

Or I’ll get my clown costume out.

On Monday a look back at some of the stories revealed by The Eye.