Home News What’s in a name? 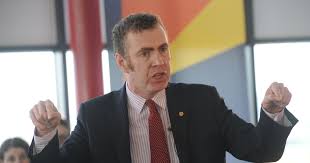 This is certainly true with the call by Plaid Cymru leadership contender Adam Price that the name of his party should be changed to the ‘New Wales Party’.

It has attracted a huge number of headlines in the Welsh media and beyond.

Unfortunately the extreme right got there first and Mr Price could have made a rather hapless freudian slip.

In 1931 Oswald Mosley resigned from the Labour Party to set up his own ‘New Party’ the following day.

It received £50,000 in funding from Lord Nuffield and launched a magazine called Action.

A candidate for Mosley’s New Party stood against Labour in the 1931 General Election in Merthyr Tydfil where he (and it) attracted 10,834 votes, as well as securing a sizeable share at 30.6 per cent.

The aim of Mr Price’s new party would be to attract votes too, also, in all likelihood, in the South Wales valleys.

This and a ‘radical Welsh populism’ are key for Mr Price.

He said: “We need to create a radical Welsh populism which turns the old Welsh story – a country mistreated, a people let down – into a new Welsh story of optimism and hope”,

and added that the proposed name would signal that Plaid Cymru “is the party of Wales’ future”.

Mosley had said an almost identical thing when he created his own ‘New Party’ – he predicted a golden future for Britain if voters opted for his new organisation.

Yet the future for the New Party was not golden.

In 1932 Mosley united most of the various fascist organisations in the UK, forming the British Union of Fascists, into which the New Party subsumed itself.

Mr Price said Plaid Cymru (or as he wants to call it the New Wales Party) needed to learn from “popular outsider movements” ranging from Labour under Jeremy Corbyn to Donald Trump’s election as US President, in order to capture the imagination of people outside the party’s core support of “Welsh-identifying, left-of-centre voters”.

But presumably Mr Price does not want to learn from that.