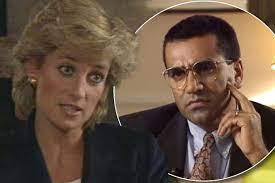 After a judge ruled that Martin Bashir was deceitful and the BBC woeful, with behaviour over the 1995 Princess Diana interview, here our Editor, Phil Parry, offers his own memories of the man at the centre of it all, and where, following a series of high-profile scandals, it leaves the corporation today.

Martin Bashir’s ‘techniques’ were well known in the media industry, and that shames us all.

I arrived as a reporter on the (now-scrapped) BBC Two Current Affairs programme Public Eye, and Martin had just left to go to BBC One Panorama, so I knew him and could call him a friend (as far as you ever were a ‘friend’ to Martin Bashir).

I must admit I liked Martin (although I found him a bit slimey!) because he could be excellent company, and he wrote me a very nice note when I left to return to Wales.

Our paths never crossed professionally, as we were both reporters, although I knew producers who refused to work with him because of his ‘methods’.

As the eminent QC, Lord Dyson, put it in his report about how Martin had secured his famous (now notorious) 1995 interview with Princess Diana: “…there were ‘significant parts of Mr Bashir’s account that I reject as incredible, unreliable and, in some cases, dishonest’“.

To get the interview, Martin had commissioned fake bank statements from a graphic designer, which purported to show that payments were being made into the accounts of a former head of security for Earl Spencer, the younger brother of the princess.

He was effectively playing on the paranoia of an emotionally damaged individual.

The earl said that Martin showed him the documents, and produced other statements a few days later, along with “fabricated” information that payments were being made to Diana’s private secretary.

Earl Spencer told Lord Dyson that Martin had shown him the fake statements to “groom me, so that he could then get to Diana for the interview he was always secretly after”.

The earl said that he took contemporaneous notes of a meeting at which Martin had made “highly improbable” claims.

He added that he felt he “was listening to a man who was not telling the truth . . . he was overexcited but also shifty”.

But this whole sorry business goes wider than just Martin Bashir – it calls into question the BBC itself, which used to be a bastion of high journalistic standards.

While Martin’s interventions and character have been roundly condemned by Lord Dyson, the report into his behaviour has also made clear that the BBC’s subsequent “cover-up” led it to fall “short of the high standards of integrity and transparency which are its hallmark”.

In a letter to Martin the day after the Panorama broadcast, Lord Tony Hall of Birkenhead (former BBC Director General and Director of News at the time) praised his “skill, sensitivity and excellent judgment . . . I also think you have carried yourself during this whole episode in absolutely the appropriate fashion. You have changed the way we report the monarchy”.

Tim Gardam, a feted one time Newsnight editor and BBC news executive (who I have worked for) interviewed Martin, who admitted to him and others that he had faked documents, but “crucially he told them that he had not shown them to anyone”.

Martin was then asked to provide evidence that Diana had not seen the documents, and “Within a few hours” he had obtained a note that she had signed.

Lord Dyson, however, said Mr Gardam had not considered that Martin had secured the interview by showing the documents to Earl Spencer, and had “too readily accepted” Martin’s explanation.

As one seasoned former executive with the corporation told me, once the truth emerged: “This level of incompetence is tragic. You can’t have this many editorial scandals – Savile, Leon Brittan, Cliff Richard, Newsnight’s erroneous exposure of an innocent Tory treasurer accused of child abuse, Brexit coverage, et al – and then wonder why the audience has departed. Sadly too many knew and said nothing”.

To my eternal discredit, I count myself among those.

On the evening that Lord Dyson’s report was published another Panorama programme was broadcast, but this time looking into the way the interview with Princess Diana was obtained, presented by the experienced reporter John Ware.

Meanwhile, Prince William Duke of Cambridge (Diana’s son), was incandescent, and a report in The Times was headlined: “William’s anger at scandal of Bashir’s Diana interview: ‘BBC lies fuelled my mother’s paranoia” with the sub-head of “Interview fed Diana’s fears and corporation’s bosses ‘looked the other way’”.

He said the BBC was “deceitful”, and there is talk now of a complete overhaul of the corporation, with UK ministers considering plans to force officials to appoint a new board for complaints, staffed by former editors and journalists (presumably not me!), as part of a review next spring.

The BBC licence fee also may be affected by the scandal, which could be frozen or even cut, for the next five years.

The UK Government is currently in negotiations with BBC executives over the future of the fee – currently £159 a year.

The police are looking into this whole affair as well.

Scotland Yard said it would assess the contents of the investigation by Lord Dyson to ensure there is no “significant new evidence” to support a criminal investigation.

The Prime Minister has got in on the act, too, with Boris Johnson saying he was “very concerned”, and that he hoped the BBC “will be taking every possible step to make sure that nothing like this ever happens again”.

Coming on top of everything else, this will be the last thing officials at the BBC will have wanted.

Even after 23 years with the corporation I am shocked, and heads should roll.

This and other awful headlines, have made seeing the BBC as it has been engulfed by controversies, like watching a car crash in slow motion…

Phil’s memories of his astonishing decades long award-winning career in journalism (including his years at the BBC) as he was gripped by the rare neurological disabling condition Hereditary Spastic Paraplegia (HSP), have been released in a major book ‘A GOOD STORY’. Order the book now!