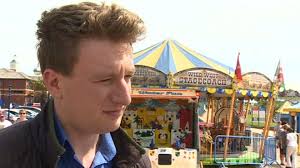 The mainstream media have avoided highlighting the interesting background of a senior Conservative in Wales who ‘sabotaged’ a rape trial, and was a central figure in the resignation of UK cabinet minister Alun Cairns, with The Eye alone in focusing on it.

In 2016 Ross England had tweeted that he told ‘Remain’ campaigners to fuck off and was suspended by his party.

Earlier the same year he had been heavily criticised by Vale of Glamorgan Labour councillor Lis Burnett after CCTV footage showed that he had been responsible for a bizarre prank when he left a ‘post-it’ note on her parked car’s windscreen saying “penalty charge notice”.

Mr England was a former adviser to Mr Cairns, and stood for the Conservatives in the Welsh Assembly elections, but a letter was published in the Vale local newspaper from one resident who was clearly baffled about his credentials.

The voter complained:  “What is his (Mr England’s) education, work and life experience or policies? It is clear he wants to be elected, and wants to do a good job, but what exactly will he do?

“Clearly schooled by Alun Cairns to stage photo opportunities and schoolboy stunts (fake parking tickets and for sale notices) what creative policies can he offer?”

During the collapsed rape trial, Mr England referred to a past sexual relationship he had enjoyed with the complainant, but was severely chastised by the senior judge overseeing the case.

Judge Stephen Hopkins QC said to him: “Why did you say that? Are you completely stupid?!

“You have managed single-handed, and I have no doubt it was deliberate on your part, to sabotage this trial… get out of my court.”

The departure of Mr England’s former close colleague Mr Cairns from the UK cabinet over allegations that he gave misleading information clearly embarrassed the Prime Minister (PM) Boris Johnson at the start of the election campaign.

In his resignation letter to the PM Mr Cairns said:  “This is a very sensitive matter, and in light of continued speculation, I write to tender my resignation as secretary of state for Wales”.

In the controversy over tweets sent after the referendum, Mr England was accused of using ‘inflammatory’ language.

One of his tweets read: “Remoaner MPs are not only determined to ignore the referendum result and subject us to foreign rule, they are also happy to wreck our constitution as they do it. Remember their names. We must never forgive and never forget”.

Another read: “Loyalty to the EU over the UK has no place in our society or our politics. Parliament and the media stink of it. There will have to be a reckoning”.

He also tweeted: “This hasn’t created a media storm because we are being de-sensitised to treason by the thousands parading their loyalty to the EU over their own country. There will be a backlash. There will be consequences”.

In the tweet which led to Mr England’s suspension from the Conservative party, his fury was directed at a Remain supporter.

The Remain supporter tweeted Mr England asking: “so @voteleave are using @AlunCairns office as a base for their activities?”

Mr England responded, in a since-deleted tweet: “Certainly not! We had a call from @StrongerIn yesterday asking us to distribute signs and told them to fuck off”.

The Remain campaigner tweeted back: “Charming! Was the call taken in your role working for @AlunCairns or for @voteleave – conflict of interests?”

But evidently Mr England has in the past been aware of his embarrassment to Tory high command.

After one of the scandals he issued a statement saying: “I have apologised to Alun Cairns and would like to apologise to anyone else who has taken offence”.

It appears a large number of people have taken offence from Mr England’s comments, not least the senior judge who asked whether he was ‘completely stupid’ and told him to ‘get out of my court’…