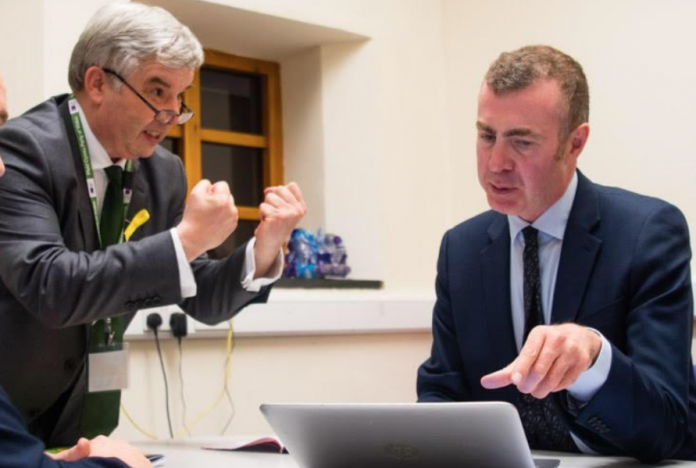 We have been overwhelmed by responses of The Eye readers to the picture of a prominent Welsh politician holding up his fists to the new leader of his party.

In a Tweet, Dai Lloyd AM, spokesperson on social care, culture and tourism for the Welsh nationalist party Plaid Cymru (PC), is shown in an apparently aggressive stance towards Adam Price.

Publishing it was, presumably, meant to be a joke and Mr Lloyd called for captions.

We have grasped the idea with both hands (as it were!).

In the picture his new leader is studying a portable computer and we mused whether they were  looking at plans to take back Rhuanedd Richards as Chief Executive, after she was appointed Editor of BBC Radio Cymru.

In the past she has shown herself very keen on the power of listening rather than just looking at a computer screen, and wrote in the PC newspaper:  “Who was it that said the greatest gift you can give another is the purity of your attention?”.

It also seemed possible they were discussing Adam Price’s controversial scheme, floated in the election campaign, to change the name of PC to the ‘New Wales Party’.

He was unaware, perhaps, that the name closely resembled the New Party, created in 1931 by fascist Oswald Mosley.

So The Eye’s idea for a credible caption might be Mr Lloyd saying:  ‘You can’t possibly give our party a name similar to a 1930s fascist group!’.

A special mention must be made of the contribution of Ms M. Jones of Pwllheli who suggested:  “Support for cage fighting – now that’s a good Plaid Cymru policy!”

We applaud Viv Mooney for stating: “How many fingers am I holding up?”.

Tribute is also to be paid to James Healy for: “Guess which hand the WiFi password is in”.

Still on the computer theme, David Lewis of Leeds has Adam Price saying:  “Don’t get angry with me, just tell me which button to press”.

We also value the proposal of Ian Davies of Carmarthen:  “What on earth are you doing putting that independence thing in our manifesto?!”

Or there is always Peter Roberts of Rhyl who proposed:  “Rhuanedd will put up a good fight for us, now that she is in the BBC!”

Many of the suggestions centred on former PC Assembly Member Simon Thomas, who has been charged with making indecent images of children on his computer and the winner is among them.

Legal restrictions exist on published comments once charges are brought, but some are protected.

So the winner is Gareth Hunter of Machynlleth, who suggested a caption of:  Plaid Cymru staff were horrified to discover Simon Thomas’ old works laptop.

As usual – no prizes unfortunately.

Just the honour of being named this week’s Eye troublemaker!