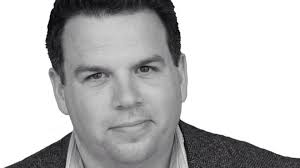 Serious questions are now being raised about the future of BBC Radio Wales Editor Colin Paterson, after discontent about the shocking audience figures was revealed by The Eye.

One senior figure in the BBC told us:  “He (Mr Paterson) can’t survive this.

“He promised us so much when he arrived, but the figures are awful”.

A former employee said to The Eye:  “Paterson can see this (BBC Radio Wales, RW) is a poisoned chalice and appears to recognise he needs an exit strategy.

“Loads of people have been Radio Wales Editor but none have stopped the decline”.

We have disclosed the low audience figures under Mr Paterson’s stewardship of RW.

RAJAR documents show that the peak audience of the week (78,000) is now Money for Nothing presented by comedian Owen Money at 9.15 on a Saturday morning.

The station is the only national English-language radio station covering all of Wales, but now has a weekly audience ‘reach’ of just 335,000 – a decrease of 26,000 listeners compared with the previous quarter and a fall of 40,000 year-on-year.

The station’s ‘share’ of listening is only 5.4 per cent, similar to the previous quarter and down almost a whole point (0.8 per cent) on the same time a year ago, but when Mr Paterson arrived as Editor almost two years ago, he made clear the rot would stop.

It is understood that he promised staff, RW would gain an audience reach of 400,000 and he put his faith in ‘big’ name presenters such as Janice Long.

Yet despite the appallingly-low audience figures we showed how recruitment continued unabated, with officials advertising for the first Deputy Editor to be part of the “success story of BBC Radio Wales,” because they said it was an “exciting time as we get ready to celebrate our 40th birthday”,

but Mr Paterson’s supporters within the BBC now seem to be few and far between.

When he joined Radio Wales, though, it was a different story.

At his appointment, his new boss, BBC Wales Director Rhodri Talfan Davies said that “his (Mr Paterson’s) incisive mind, his passion and his deep understanding of radio will be invaluable as the station nears its 40th birthday in 2018”,

But his changes also led to complaints from senior politicians.

Last August, cuts to commentary for Wrexham football games on RW were criticised as unfair.

The North Wales Assembly Member (AM) Llyr Gruffydd demanded officials rethink the decision to reduce radio coverage of the team’s matches, and put them on the BBC’s website.

The reporting of Newport County games on RW has also led to a stern letter to him from a politician.

Also in August, the MP for Newport East, Jessica Morden, said constituents had contacted her to complain about the lack of radio coverage on the BBC.

He had outlined a radical plan to axe the FM radio opt out for North Wales, except for “key games”.

Mr Paterson is also bullish about his own recent past, and an angry exchange of letters with a disappointed listener gives a flavour of the unhappiness of the audience.
In one letter Mr Paterson makes a potentially libellous comment, and said:  “In terms of my personal track record, I hope the numbers speak for themselves.

As the Programme Director of Red Dragon FM, I led the station to an all-time record audience in 2010.

“I was the Executive Producer of BBC Radio Wales at its last peak in 2013 and, since taking over as Editor … the station has seen significant growth.

“Despite not being Welsh, I’ve taken a great deal of time to understand the country.”

The reply to Mr Patterson was corruscating:  “Things have descended to an all time low if a Scottish commercial radio executive is now calling the shots for our BBC national radio station.

“It is beyond belief Wales cannot find someone who can relate to our wonderful country.”

The radio listener told us:  “BBC Wales also has a duty to reflect the population and culture of Wales.

“BBC Radio Wales is not a commercial radio station”.

But in the eyes of many who watched the extraordinary performance they both failed spectacularly.

One avid radio listener told The Eye at the time:  “The whole meeting was waffle.

“Colin Paterson seems adept at being able to play the BBC game.”

Mr Paterson may have more time on his hands to play games after our revelations of staff unhappiness at the listening numbers on the radio station he leads.

Tomorrow – why the future may be bright with our young people.