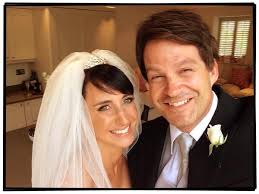 It is always good to make forecasts for the future as a new year (in this case a new decade) begins, but some are less welcome than others.

The ‘predictive search results’ for BBC Cymru Wales (BBC CW) television and radio presenter Lucy Owen in ‘Google’ make unfortunate prophecies for her and her husband.

This is, perhaps, prescient as we understand Ms Owen is in a relationship with BBC Radio Wales (RW) Editor Colin Paterson.

Senior sources inside the corporation have told us the issue raises major concerns about a possible conflict of interest in a publicly-funded organisation as Ms Owen has presented her own Sunday morning show on RW.

Knowledge of the affair is widespread

Media executives outside BBC CW have also given us details of the relationship and their growing concerns about the potential conflict of interest.

The programme Ms Owen hosted on RW was called ‘Sunday morning with Lucy Owen’, and her lover Mr Paterson has long been a controversial figure, with his schedules at the centre of recent changes.

There has been a huge shake up in the line up at RW as Mr Paterson struggled to combat audience figures which are at a record low.

He described the new line up as a “creative challenge” and the statistics have made the scale of the challenge clear, revealing that his station had an average weekly audience of just 317,000 listeners in a three month period.

Among the changes that were announced in a bid to stem the tide of disastrous listening figures was a new breakfast programme hosted by different presenters on Monday to Thursday, to Fridays and Saturdays.

But a former day time programme presenter, who was called on Wikipedia one of the main presenters for RW at the beginning, Mike Flynn, was deeply unimpressed.

Mr Flynn was equally angry at our revelations of the affair and said to us: “If Paterson has been having an affair with a Wales Today and Radio Wales presenter it brings his management skills in to question and he needs to be suspended immediately.”

Yet others have been less happy.

His new morning programme on RW was described by listeners as “awful”, “abysmal“, and “one of the worst programmes I have heard in a long time”.

The Deputy Economy Minister in Wales Lee Waters AM has said publicly he is worried by what is happening and that there should be ‘serious’ and ‘challenging’ journalism, and objected to the decision to drop the Good Morning Wales (GMW) programme.

A ‘challenging situation’ is right – if ‘Google’s’ predictive search results are correct.

Phil Parry’s memories of his extraordinary 36-year award-winning career in journalism as he was gripped by the incurable disabling condition Hereditary Spastic Paraplegia (HSP), have been released in a major new book ‘A GOOD STORY’. Order the book now!