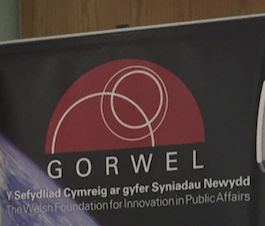 As part of The Eye’s partnership with the thinktank Gorwel, our Editor Phil Parry reports on last night’s talk on technology, where the spirit of a former Prime Minister was invoked.

If only Boris Johnson, Liam Fox, David Davis et al. had been there.

Laid out clearly before them would have been the devastating effect of Brexit on grant funding for technology research in places like Wales.

“We are on a journey but we don’t know where we are going”, said Peter Quantick of Cardiff Metropolitan University, who gave last night’s Gorwel talk on the importance of technology at Ty Hywel in Cardiff bay.

Areas such as Wales, and regions like the North of England (both of which, ironically, voted for Brexit) will be particularly badly hit by the withdrawal of European Union (EU) grants.

Retaining access to those grants used to be talked about by Brexiteers in the referendum campaign.

But now, Professor Quantick made clear: “Accessing EU funds has fallen off the table”.

He added provocatively:  “We really need another Harold Wilson”.

Now that is not something you hear every day – but he was referring to the much-vaunted idea that at least Harold Wilson understood the vital role of technology, and how it was crucial for progress.

The title of Professor Quantick’s talk was ‘The White Heat Of Technology’ named after Harold Wilson’s famous speech in 1963 to the Labour party conference, which almost certainly helped propel him to Number 10 the following year.

It was a “visionary speech”, he said, “and still relevant today”.

The Professor made it clear that a whole range of grants could be affected by Brexit, with millions of pounds at stake.

Some could be to help companies emulate one in Abercynon called ‘Breathtec’, which offers a non-invasive way of telling if you need anti-biotics or not (it’s easier then to accept you don’t need them, and the over-subscribing should be reduced).

Or others which look at ways to bring down child mortality rates.

But the future for research into areas like medical technology, Artificial Intelligence (AI), and robotics, is not a rosy one because of the “huge uncertainty of EU grants”.

It is a bit of a myth that technological progress makes you unhappy.

In fact, according to a United Nations (UN) report, it actually makes you HAPPIER!

Enlightenment ideas such as scientific progress and technology are hugely important.

It was good to see the other side of Cardiff Metropolitan University to the picture of ‘chaos’ painted by an internal source at the institution which we have also revealed on The Eye.

But Brexit loomed over everything.