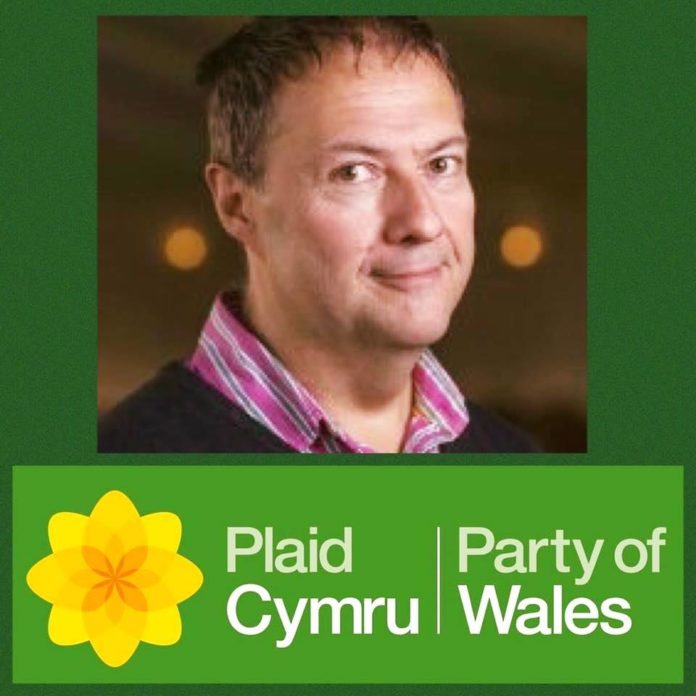 The Eye can today reveal how the political neutrality has been destroyed of a ‘comedian’ claiming he is setting up an ‘unbiased’ Welsh news service, and who encouraged a social media follower to watch an illegal stream of a football match

The exclusive disturbing news from our journalists about Huw Marshall comes after we showed how he had made sick ‘jokes’ about a murdering gunman, used bad language to abuse prominent politicians on social media, and was investigated by the police.

Mr Marshall has secured pledges of huge amounts of money from the public for ‘New Media Wales (NMW)’ but has now used Twitter to attack Nia Griffith, a leading Labour MP in Wales who is a shadow UK Government minister, and declared:  “Unless we all start discussing independence Wales is stuffed…”.

Yet in the NMW ‘manifesto’, Mr Marshall had written: “We will be politically neutral, we have to be, our aim will be to deliver scrutiny and clarity around the policies being proposed by the various political parties in Wales in the run up to the Welsh general election being contested in May 2021″.

One potential donor also used Twitter in stressing to him: “I really hope it will be unbiased and not rammed with the anti-government nationalist diatribe from another Welsh news outlet…” and Mr Marshall answered soothingly:  “Our main aim isn’t to tell people what to think…”.

More recently on Twitter, Mr Marshall instructed a follower how to watch an unlawful transmission of the West Ham v Wolves football match, by telling him:  “Click on the play window.”.

Critics believe a man with this sort of past is not suitable to create a new ‘independent’ media service for Wales.

But The Eye’s investigations have shown that Mr Marshall’s political leanings were on display even before his announcements attacking Labour, and about Welsh independence a few days ago

He was the Welsh nationalist party Plaid Cymru (PC) parliamentary candidate in Cardiff Central, coming fourth with just 748 votes, however his plans to stand for election as a councillor were scuppered when it emerged that he had posted so-called ‘jokes’ about rampaging gunman Raoul Moat, and called two senior politicians who oppose Welsh independence, ‘twats’ on social media.

Another post read: “Moat reward… if he isn’t caught by next Wednesday, the rewards (sic) being doubled. It’s going to be a Raul” (sic) over”.

In 2013, it was disclosed that Mr Marshall had made the extremely offensive remarks to prominent politicians, on Twitter, and complaints after further comments led to reprimands from the social media giant.

Evidently Mr Marshall is though sensitive to criticism himself, and has posted on Twitter that there will be legal involvement after our disclosures, saying “…the time will shortly come when lawyers get involved”, and he has said recently on Twitter that he was “still considering what action to take”.

He has also proclaimed that he has contacted the police, but there was little they can do as “it is a waste of their precious time”, and “I really pity those who try to undermine my work and reputation”.

But it seems the police HAVE had time to investigate Mr Marshall for alleged harassment. On Twitter he told South Wales Police that he intended to make a complaint, officers though responded by informing him that they have a “responsibility to investigate any reports”.

Even with this kind of colourful background it appears that Mr Marshall has gone from strength to strength, and confidence may be a factor.

The charity Mudiad Meithrin (MM) that supports children and their families in Wales finding Welsh-language childcare, has admitted it appointed him to its board because of his “extensive experience” despite these facts.

An outraged protester contacted MM about naming him to help oversee the organisation as a voluntary director, and waited more than a month for a substantive response to his complaint, yet when he followed it up one arrived within hours.

The MM Board of Directors Chair Rhodri Llwyd Morgan told the angry critic:  “Huw Marshall has extensive experience as a volunteer with Mudiad committees locally and regionally and a range of other voluntary experiences and professional skills”, and:  “I am satisfied that he will make a valuable contribution to the Board’s work”.

But the complainant remained deeply unimpressed by the response, and told MM: “I find your reply incredible.  Huw Marshall’s “extensive experience” that you talk of, appears to extend to calling senior politicians ‘twats’ on social media, being put under police investigation for harassment, making sick jokes about a gunman who had murdered people, and being rebuked by Twitter for his language.

“Is this really the sort of man you want to represent your organisation which helps children and their families? I also note that I had to wait for more than a month for a substantive reply, yet when I prompted you by asking about my complaint, you replied within hours!”.

In announcing the appointment to its board, MM said it was “delighted”, perhaps unaware that Mr Marshall has suffered a severe social media reprimand because one “account violated the Twitter Rules”, and another, “WelshBollocks”, had broken the rules as well.

But his social media experience appears to have been a major attraction for MM despite the rebuke.

The charity declared:  “Huw Marshall… is the founder of ‘Yr Awr Gymraeg’ – a Twitter account which promotes Welsh-medium activities and events… “.

Mr Marshall, though, appears undaunted by the criticism and has announced on social media:  “…I could go in to the BBC tomorrow and save millions without impacting the content they produce…”

This level of confidence is also clearly shown by Mr Marshall stating at the ‘launch’ of NMW, “We will be politically neutral”, despite his attacks on a front bench Labour MP, and by calling for Welsh independence to be discussed, as well as his support for an unlawful action by telling a social media follower how to watch the illegal stream of a football match.

Tomorrow – we look at what lockdown really means for people in Wales.

Also on The Eye – how a ‘get-tough’ message from the new BBC Director General about the use of social media, could mean several Welsh presenters face the sack.