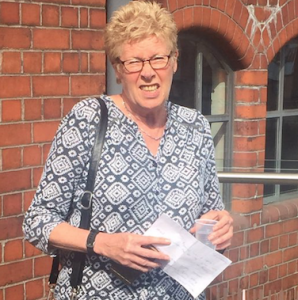 Controversial Pro Vice-Chancellor of Swansea University, Hilary Lappin-Scott (H L-S) tells a hapless colleague (C) about her latest travels, in a meeting where Edwin Phillips is an uninvited guest.

H L-S: (Appearing to bounce out of frame) well here I am speaking to you on Skype.

I know you will be disappointed that I am not there in person but I am here in New Orleans because I’m attending the American Society for Microbiology Conference.

I hear critics in Swansea who should know better call it a ‘pretext’ but nothing could be further from the truth!

(Louder) I guess that you did not present a paper at the conference.

H L-S:  Certainly not, Richard (Davies, Vice-Chancellor) says I am far too important to have to do that.

After all I am a Vice-President of the Federation of European Microbiological Societies and because my many supporters (who are known as ‘Twerps’) insist, I have to spend my time tweeting pictures of me meeting other global academic superstars from the world of microbiology.

C:  (Slaps forehead) yes, I did see a tweet of you pictured with another ‘academic superstar’ from the University of Puget Sound.

The University of Puget Sound is, after my efforts, like Swansea University.

It is another important university and in the top echelon of global academic excellence.

(Looking serious) ofcourse I only consort with royalty and the intellectual crème de la crème.

C: (Sarcastically) yes, it does look as though the conference was hard work and intellectually demanding.

H L-S: (Not noticing the sarcasm) absolutely, and I have been making a special effort this time to send out useful and informative tweets about the conference so that the Twerps can see that I am actually doing something.

(Quietly) hopefully this will also fob off Swansea University council members who apparently think I am a complete waste of space and money.

C: (Sighing) I did happen to look at what you had tweeted.

Now, I do not know anything about microbiology but I can recognise meaningless drivel when I see it.

(Laughing quietly) after all, I lecture at Swansea University.

(Gaining confidence) posting 12 trivial conference tweets appears to be a pretty rum deal for five days of living-it-up in New Orleans at the university’s expense.

Just how many sessions did you actually attend?

H L-S: (Coughing) how many sessions?

(Becoming agitated) how many times do I have to say that I go to these conferences simply to be seen?

I have been told not to actually DO anything.

Nobody, (under breath) and certainly not those supine members of the University Council or the University’s Director of Finance (louder) is going to question whether it is university money well spent.

And even better if the weather is warmer than in Swansea!

Journey’s end part two is on Monday, when Hilary Lapin-Scott proclaims her ‘success’ in appointing women to senior posts despite the fact other universities have far more.