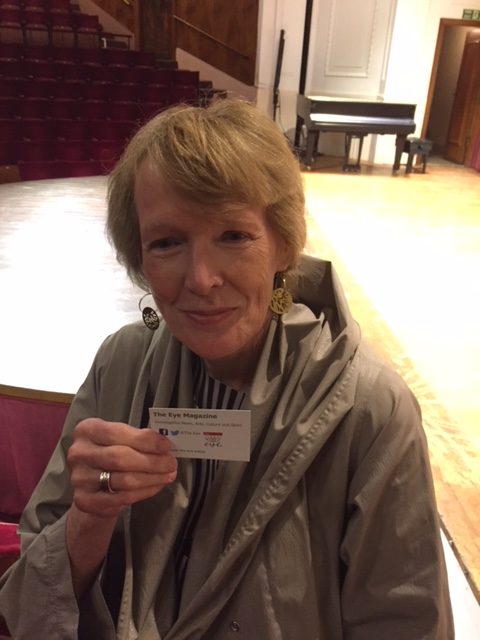 The Eye have teamed up with the Welsh thinktank Gorwel and here we report on the latest talk in its series by Margaret MacMillan on Lloyd George.

It is rare that a genuine star appears.

But so it was last night in Cardiff when Professor Margaret MacMillan gave her Gorwel talk in conjunction with the Lloyd George Society about Wales’ very own ‘Welsh Wizard’.

She is, perhaps, the foremost authority on the treaty at the end of the First World War and Lloyd George’s role in the 1919 peace conference at Versailles.

Her 2001 book ‘Peacemakers’ sold in its millions and won the Samuel Johnson Prize for non-fiction (now the Baillie Gifford Prize).

She is also the great grand-daughter of Lloyd George, and (possibly even more importantly) the aunt of TV historian Dan Snow.

Professor MacMillan told her rapt audience at the Reardon Smith Theatre that much of the accepted view of Lloyd George was “unfair”.

In fact ‘unfair’ was a word she used a lot in describing the received wisdom about Lloyd George.

Much of it was down to the brilliant but big-headed economist who attended the Versailles conference, John Maynard Keynes, and to the modern ears his criticisms would have sounded, frankly, racist.

Loyd George was, he said, a “siren” and “goat-footed bard” from “celtic antiquity” who was “cunning and purposeless”.

Indeed Maynard Keynes’ mother told him to take out a lot of the worst invective!

Yet Professor MacMillan showed that Lloyd George was anything but ‘purposeless’.

He possessed the gift that all great politicians should have, of seeing the importance of COMPROMISE.

Lloyd George knew, for example, that the French needed to compromise in order to deal with the Germans at the end of the war.

The French may have been right to demand huge and substantial reparations from a defeated Germany, after their industry had been devastated, their country invaded and vast swathes of their land destroyed, not to mention the countless young men who gave their lives in the war.

Yet Lloyd George realised that to reduce Germany to penury would not serve Britain’s interests, still less the Germans.

“Lloyd George’s role in the treaty was to find a compromise”.

Lloyd George knew that Britain had achieved most of its aims before the treaty of Versailes – Germany was no longer the dominant power on the European continent and its navy had been humbled – so he had to strive to make certain that Britain received its due.

He ensured pensions were provided for soldiers and their widows.

He had also taken on the Generals during the First World War itself.

They saw warfare as an extension of past campaigns, when the enemy could be defeated using the ‘cold steel’ of the bayonet.

Yet Lloyd George – who had no military experience – knew that this war was different, that the army would have to be provided with modern weapons in vast numbers, and the public had to be convinced that victory would follow.

“Lloyd George struggled with the Generals, and understood that the First World War affected everyone.

“This was probably the first total war and Lloyd George grasped that,” she said.

In fact there was a lot Lloyd George grasped, and Professor MacMillan’s talk was excellent in revealing that.

Check your knowledge of today’s events as revealed over the last few months on The Eye, with our brilliant new interactive quiz:

Which journalist told us incorrectly “satire is no defence against libel”?

The former Vice-Chancellor of which Welsh university said in an email “have you seen how Chinese women age?”?

Which Welsh radio station has record-breaking low audience figures and far below the level its Editor said it would reach at the 40th anniversary?

What is the name of the bar in Spain where the marketing is run by a crook exposed by The Eye?

What is the name of the new Welsh First Minister who has not been challenged by the mainstream media over the fact he was in charge of health in Wales when huge scandals erupted and that he has a leading supporter who ‘liked’ a tweet about a Jewish ‘conspiracy’?

What is the name of the street which had meters for every room in our Editor’s first Cardiff flat?

Which was the Welsh hospital where whistleblowers exposed practices where an elderly stroke victim was allegedly slapped in bed by a carer?

What is the name of the controversial author in Wales who gave The Eye details of his hit-and-run car crash?

Which Welsh university did The Eye first reveal was shedding more jobs?

What is the name of the Welsh conman exposed by The Eye who lied that he was engaged in a two-year legal battle with the website?

Kicked in the Dooleys

Edwin Phillips - 21st February 2020
%d bloggers like this:
We use cookies to ensure that we give you the best experience on our website. If you continue to use this site we will assume that you are happy with it.OKNORead more