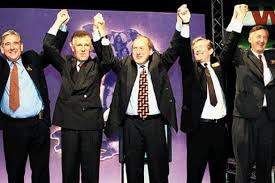 A leading Labour member of the devolution campaign group which became ‘Yes for Wales’ has endorsed former Prime Minister Tony Blair’s comments that there was major opposition to the move from within her own party.

Angela Elniff-Larsen has confirmed to The Eye that the group faced huge resistance from inside Labour to the idea of devolving power to Wales.

Speaking ahead of the 20th anniversary of the devolution referendum, Tony Blair admitted  there had been a “considerable” battle in the party.

“A lot of key figures in Labour didn’t want devolution.

“We were a cross-party group which was a sort of precursor to ‘Yes for Wales’, and because we included ‘Nats’ (Plaid Cymru) many in Labour wanted nothing to do with us, and were flatly opposed to devolution”.

The comments explain the rifts within Labour before the Welsh devolution referendum in 1997, which ended with a narrow victory for the ‘Yes’ campaign.

Former Prime Minister Tony Blair has admitted he “steamrollered” devolution through 20 years ago, despite objections from many within the Labour party.

The 1997 referendums in Wales and Scotland took place after Labour had made it a manifesto commitment in that year’s general election campaign, which it won by a landslide.

Scotland voted by a three-to-one margin in favour of a parliament, but the Yes campaign victory in Wales was much closer – a majority of just under 7,000 (0.6%) of more than a million votes cast.

The 1979 referendum under the previous Labour government saw devolution for Wales overwhelmingly rejected by a four-to-one majority.

Mr Blair told BBC Wales:  “There were real worries about it (devolution).

“To be honest, I am not sure I persuaded them.

“In the end we steamrollered it.”

Mr Blair said that in contrast to Scotland, where devolution was seen as a “staging post by the nationalist element to full separation”, people in Wales were more comfortable with the notion of devolution within the context of the UK.

“I still feel basically that devolution has allowed us, as a UK, to keep together,” he added.

“If, as it looks to me, that separation somewhat subsides in Scotland then we will be left with a constitutional settlement that 20 years on, for all its stresses and strains from time to time, has kept the UK together.”

Ms Elniff-Larsen stressed:  “They (Labour opponents) were the same people who had opposed the previous referendum (in 1979)“.

Comments like these shine a light on the hostility to the concept of devolving power within the Labour party in Wales.