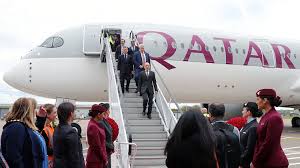 Alarming controversies continue to mount over a contentious link up between Wales’ main airport and an airline controlled by a state accused of supporting terrorism which has been hugely-praised in the mainstream media, The Eye can reveal.

The then Chairman of Cardiff Airport (CA) Roger Lewis described as “transformational” the connection with the state-controlled Qatar Airways (QA).

But a top-level investigation by The Times has disclosed that a British bank also controlled by the Qatari state, Al Rayan, is providing financial services to multiple British organisations linked to Islamists.

Some of the bank’s clients have had their accounts with western banks frozen or closed in a security clampdown, and it counts among its customers a charity banned in the USA as a terrorist entity, groups that promote hardline preachers and a mosque whose long-term trustee is a Hamas leader.

Its Chief Executive until April, Sultan Choudhury, was also an unpaid director for seven years until 2016 of the British arm of a global religious institute whose speakers and instructors have included advocates of child marriage, female circumcision and the death penalty for adultery and apostasy.

But disturbing headlines have continued to swirl around Qatar’s alleged actvities, putting further pressure on the connection with CA.

The UK Government has warned that potential travellers to the country faced major risks, and it stated on its advice website:  “Terrorists are likely to try to carry out attacks in Qatar“.

Qatar also hosted the ousted ruler of Sudan, Omar al-Bashir, who has now been charged with incitement and involvement in the killing of protesters.

It kept silent as hundreds of thousands of Algerians protested, chanting “the people want the regime to go”.

Hundreds of millions of dollars in ‘aid’ money has been given by Qatar to Hamas, the group which holds sway in the Gaza Strip, and which has been designated by the USA as a terrorist organisation.

The sister paper to The Times, The Sunday Times, has revealed that the tiny desert state had secretly offered £400 million to FIFA just 21 days before the worrying decision was announced to hold the 2022 football World Cup there.

Despite all these controversies the mainstream media, senior politicians in Wales as well as executives at CA have lauded the connection with QA, and The Eye have been alone in reporting uncomfortable facts about the country.

In interviews, the First Minister of Wales at the time, Carwyn Jones stated:  “We would like to work with his excellency (Akbar Al Baker the Chief Executive of Qatar Airways).

He tweeted that he ‘welcomed’ the first Qatar Airways flight into Cardiff Airport and said it represented a “huge boost” for Wales.

The Welsh Secretary Alun Cairns informed us:  “The new flight from Cardiff to Doha (the capital of Qatar) plugs our entrepreneurs straight into one of the most dynamic economies in the Middle East, and an airport which offers a further 150 global destinations”.

The mainstream media’s response to the announcement of the new route has been just as extraordinary, and the subject of our satirical writer Edwin Phillips.

The new flight to Qatar’s Hamed International Airport was described in the South Wales Echo as providing “capacity for 150,000 passengers a year, as well as significant freight capacity for Welsh exporters at around 10 tonnes a flight”.

When the first flight from Doha was due, WalesOnline reported the words of Mr Lewis when he said: “This is a pivotal moment for Cardiff Airport, for Wales and the South West of England.

“The far reaching consequences of this service for passengers and businesses will be transformational”.

The same praising word was used by the present Chief Executive of CA Deb Bowen Rees who told the South Wales Echo:  “The Qatar Airways service has been transformational…”

It seems the growing list of controversies for CA is also ‘tranformational’..

Tomorrow we reveal the name of ANOTHER individual implicated in a major police investigation into alleged bribery in a multi-million pound land deal.