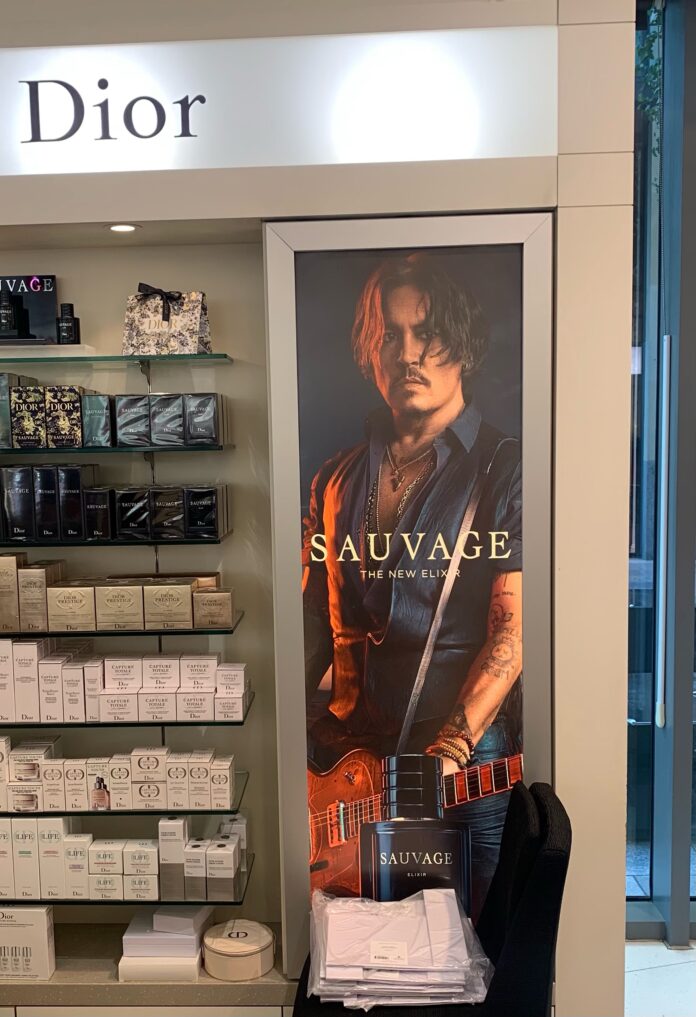 A major department store continuing to use the picture of an actor labelled in court as a “wife beater” to sell male perfume, once again throws the spotlight on a judge’s comments about him.

Mr Justice Nicol ruled that Johnny Depp attacked his wife Amber Heard 12 times during their relationship, and that The Sun article about the assaults, was “substantially true”.

However as of Monday, the giant department store John Lewis (JL) was still using a large picture of Mr Depp to sell Dior’s Eau Sauvage in the perfume department of its Cardiff shop.

Shoppers have queried this decision by JL to The Eye, as the court heard that Mr Depp had engaged in shocking behaviour.

The judge found Mr Depp put his ex-wife in “fear for her life” on three occasions – including during a “three-day hostage situation” in Australia in March 2015, where £120,000 worth of damage was caused to their rented home.

The judge in the libel case brought by Mr Depp, dismissed two allegations made by Ms Heard, but did not conclude she had been untruthful. These were:

For his part, since the assaults Mr Depp has said he has been through “an unpleasant and messy situation”,  and is facing a Hollywood “boycott”.

It also appears that legal problems continue to beset him.

He faces another battle in the US – a $50 million defamation lawsuit has been lodged against Ms Heard over a Washington Post opinion piece on domestic abuse.

— A major department store in the capital city of Wales used a picture of shamed actor Johnny Depp to sell eau de cologne despite him losing his bid to appeal against a scathing High Court ruling that he battered his ex-wife 12 times.

A judge at this court decided that The Sun was right to brand Mr Depp a “wife beater” for the brutal attacks on his ex, Amber Heard.

In March the court ruled Mr Depp’s appeal had “no real prospect of success”.

However, in defending use of the picture of Mr Depp last month, a John Lewis (JL) representative at the ground floor perfume counter near the front door, told The Eye’s Editor Phil Parry: “He (Johnny Depp) was never charged!”.

Apart from this response, the main media relations department of the store appeared to be less than willing to give a full statement about the situation.

Last Thursday Mr Parry, asked the JL Press Office (PO) for an explanation of the policy, and was told the issue would be ‘looked into‘, and he was asked to provide a deadline.

This was the response from the JL PO which is meant to serve the media: “Hello Phil, Thank you for your email and getting in touch. We will look into this for you – please could you let me know what your deadline is?

The immediate reply from Mr Parry was that the statement should be given ‘ASAP’, however, nothing has been provided.

In the original libel case last year, the judge Mr Justice Nicol concluded Mr Depp had beaten Ms Heard 12 out of 14 times – starting in 2013 when he slapped the actress after she made a comment about his tattoo.

He dismissed two allegations made by Ms Heard in 2014 and 2015, but said he couldn’t conclude she had been “untruthful”.

Perhaps when details of THIS case are reported, JL will not use the picture of a man who battered his ex-wife 12 times.

But continuing to use his photograph seems a strange way to sell perfume. Especially after a UK court ruled that the assaults had happened…

For helpful information to victims of domestic abuse, the UK Government website states: If you are in immediate danger, call 999 and ask for the police. If you can’t speak and are calling on a mobile press 55 to have your call transferred to the police. Find out how to call the police when you can’t speak.

Household isolation instructions do not apply if you need to leave your home to escape domestic abuse.

Tomorrow – more details of the abuse (which unlike Ms Heard’s is NOT physical) we constantly receive on The Eye.

Details of Mr Parry’s astonishing 38 year, award-winning, journalistic career (including details from some of the many court cases he has covered), as he was gripped by the rare neurological condition Hereditary Spastic Paraplegia (HSP), have been released in a major book ‘A GOOD STORY’. Order it now!