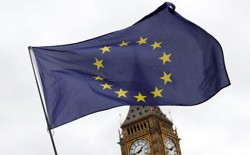 Follow Us!
Latest posts by The Eye (see all)
When European Union and United Kingdom negotiators convened in Brussels Monday to resume Brexit negotiations, they said they would work to identify both their differences and their similarities. Four days, and one round of talks later, it seems they’ve made good progress on the former.

“We are now moving in a common direction,” Michel Barnier, the EU’s chief Brexit negotiator, said Thursday at a press conference in Brussels. The remarks capped off the first full round of Brexit negotiations, during which the two sides concluded no agreements, and where the EU repeatedly sought more clarity on the key issues. The next round is scheduled for late August. “But there does remain one fundamental divergence on the way on which [citizens’ rights] would be guaranteed and on other points, such as the rights of future family members and the export of certain benefits,” Barnier said.

Why Is Brexit So Expensive?

Standing alongside his British counterpart, U.K. Brexit Secretary David Davis, Barnier said citizens’ rights remains one of the thorniest issues of negotiations. Leading up to the second round of talks, the EU called on the U.K. to offer “more ambition,  clarity, and guarantees” in its proposal for European citizens living in the U.K., which some EU leaders have criticized as lacking in comparison to the European proposal for British nationals. European negotiators want citizens’ rights to be guaranteed by the European Court of Justice, the EU high court—a demand the U.K. has previously dismissed, but one Barnier reaffirmed is “not a choice, it’s an obligation.” For as much as both sides have found common ground, there appears to be just as much division. “We agree on the need for certainty on the part of citizens, both of the EU and the U.K.,” Davis said. “We obviously have different views on how we achieve that.”

That wasn’t the only source of contention. Barnier complained that the British government has not made clear its stance on the Brexit “divorce bill,” which the EU wants the U.K. to pay as a means of settling its financial commitments to the bloc before it leaves. “An orderly exit requires the payment of the accounts,” Barnier said of the bill, which economic analysts project could fall anywhere in the range of 20 billion to 100 billion euros. “A clarification of the United Kingdom’s position is essential to negotiate.” Davis, in response, said that both sides “recognize the importance of sorting out the obligations we have to one another,” but stopped short of addressing how much, if any, the U.K. would be willing to pay.

He added: “Getting to a solution will require flexibility from both sides. But, as Michel said, we should not expect incremental process in every round.”

While both Barnier and Davis said the talks are progressing, neither offered evidence of agreement or compromise, suggesting the key issues headlining this round of talks—including citizens’ rights, the divorce bill, and Brexit’s impact on the border between Ireland and Northern Ireland—will almost certainly dominate the next round, which is scheduled to resume next month.“Clearly there’s a lot left to talk about,” Davis said.