Our satirical writer Edwin Phillips overhears an Editorial discussion on what constitutes humour after one cartoon about being Welsh in an airport caused a furore on social media, and a senior politician accused a radio host of being a ‘windbag’ for saying it was just a joke.

EDITOR (E) (looking at cartoon):  You can’t say that it might offend people! 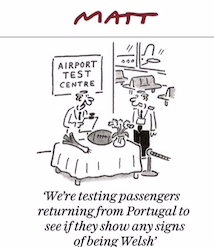 CARTOONIST (C):  It’s only a cartoon.  If people take offence it is a sign of an inferiority complex, and how thin-skinned they are.

E:  Yes, but you’ve seen what that Plaid Cymru (PC) woman in the Welsh Parliament Delyth Jewell wrote on Twitter to a celebrity who called it just a joke – that her message ‘typified’ “why Wales’ future needs to be decided by the people of Wales, not professional windbags like you”.

She’s an elected politician too.

These sorts of comments are not a sign of a reasoned contribution in a considered debate about humour.

They are childish insults and by talking about “the people of Wales” it just shows to the UK there is no sense of humour in Wales, and that politicians like this are nervous about their country’s status.

Everyone can laugh at Wales then!

Anyway, um, she has made very significant pronouncements, like when she said so accurately in July: “Support for Welsh independence is increasing every day…”.

Everyone, er, must see how true that is.

And, um, she also said, moderately, in April last year: “It would be a catastrophe were the plans at Gwern y Domen to be rushed through when we are on the cusp of protecting the land through the new framework”.

After all (clears throat) she has a lot of supporters who make extremely thoughtful comments.

There was that one on Twitter about burning down English businesses when people may have died, and the other one about a person being proud of the fires he started.

Er, she got the same level of support on Facebook too with one person saying in a very considered way:  “Maybe they should just check for evidence of Swan Vestas”.

(to self once more – Maybe this one was just a joke. But, er, they seem to be happy with that kind of humour.)

C raises eyes to ceiling again, saying:  There is a very important principle of freedom of speech here. The ‘Charlie Hebdo’ trial has started (14 defendants have gone on trial in Paris alleged to have helped in the attack on the offices of the satirical magazine Charlie Hebdo when 12 people died in 2015) and they went ahead and re-printed the cartoon people didn’t like.
E (coughing): Er, yes, but, um, even so YOU CAN’T SAY IT…
————————————————————————————-
Tomorrow – the media ‘commentator’ in Wales who walked out of an event where she was due to be a guest speaker after she found out it was funded by a controversial Russian broadcaster, yet had herself appeared on one of the station’s shows.

The memories of our Editor Phil Parry’s astonishing 37-year award-winning career in the serious job of journalism as he was gripped by the rare neurological disabling condition Hereditary Spastic Paraplegia (HSP), have been released in the major book ‘A GOOD STORY’. Order the book now!