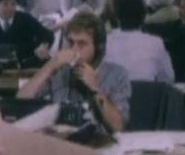 As part of our occasional series on his early years during 34 years in journalism, here our award-winning Editor, Phil Parry, recounts his days with a freelance agency in the 1980s.

A golden rule of working in a freelance agency is never to answer the ‘phone on a Friday evening.

Sadly I broke this rule in 1987 when I was working at Cambrian News Agency on Charles Street in Cardiff. I was alone in the office, and the ‘phone had been ringing for some time. I thought:  ‘Should I pick it up or shouldn’t I?’.

Unfortunately I did and on the other end it was the News Editor of a UK Sunday newspaper with a commission.

“I want you to do something for us”, he drawled.

My heart sank.  I should have known better than to answer that ‘phone.

I could hear him puffing on his cigarette (everyone smoked in those days).

“A report has just come out naming the former Nazis who fled Germany, along with their addresses.  Some of them came to Britain.  One of them is near you – in Herefordshire (they had no idea of geography) I want you to get up there, find him and interview him.”

I had to think fast.  Should I make up an excuse and say I was working on something else, or that there was no one available to go?

No – there was no alternative, I had to do it.

“Yes, of course”, I said breezily.  “We’d be happy to send someone (pretending we had a cast of thousands when there was only me in the office)“.

So I drove to Herefordshire to find this man.

They were naturally all old people by then, and this person was living in an old people’s home in the country.  I found the home (by this time it was late at night) and I effectively broke into the building.

It wasn’t illegal because it didn’t involve damaging any windows or doors – it was all open and I just walked straight in.  But it wouldn’t have looked very good if the police had been called, and I said:  “I am a reporter trying to find a man who worked for the Germans in the Second World War”.

I quietly moved up the stairs to where I knew his room must be, and I knocked on the door. Incredibly he was still up.

“Hello,” I said nervously. “My name is Phil Parry from xxxx newspaper, and I have a few questions to put to you”.

I made the accusation – that he had been a prison guard for the Germans during World War II.  What did he have to say for himself?

He accepted he was that person (he came from a Baltic state) but denied he had ever worked for the Germans.

“Er, thank you”, I said haltingly with no idea what I should ask next.

I cleared my throat.  “That will be all”, I said, pretending I was from some official body because I knew I had to appear as though I knew what I was doing, even though I didn’t have a clue.

I went back out as quietly as I came in, confident that my ‘exclusive’ would make a page lead in the Sunday newspaper:  “Man denies he was a German prison guard in WWII” etc. My bosses would be extremely pleased and the story would earn a lot of money.

I filed my copy and sat back and waited for the huge piece to appear, and the plaudits which would inevitably follow.

Unfortunately it was the night of a terrible disaster and most of the planned stories were wiped out on the paper.

It made… a single paragraph!