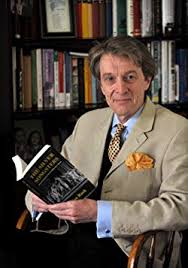 It seems The Eye have become another target of abuse also endured by a controversial anti-Welsh language writer who was in a coma for seven weeks after he fell victim to a hit-and-run attack, despite the fact the piece which prompted the insults was clearly authored by him.

One reader asked critically of us on social media:  “Why do you allow people like him to do his obnoxious stuff on your website?”

Another said about the writer:  “Still a twat”.

While a different reader said sarcastically about his injuries:  Aww, bless”.

The controversial author and columnist Julian Ruck has written pungent articles attacking Welsh nationalism as well as the Welsh language, and was the main focus of the offensive comments.

He wrote on The Eye for the first time, and exclusively to us, of the severe injuries he sustained after being hit by a car outside his home in Carmarthenshire, following which he was rushed to hospital.

The teenage hit-and-run driver was prosecuted three years ago and received a suspended jail sentence.

Mr Ruck said:  “It took seven weeks for me to reach consciousness and I had pipes going everywhere. The car had struck me outside my own home. Bang and that was it.

“My memory of the incident is zero, nothing. The defendant thought he had struck a wing mirror! The state of his car made that a non-starter, because it looked as if he had hit a brick wall.

“The simple truth is, that I can’t argue one way or the other as to the cause. But one cannot forget that the nationalist angst I have received does not put the question out of consideration. Was it an accident? I shall never know.”

Mr Ruck has written seven books and appeared on a network TV debate about the Welsh language with BBC Newsnight which has itself been heavily criticised.

But while the motive for the hit-and-run car crash he suffered is not known, Mr Ruck has endured other, written, attacks before it happened.

He stated on The Eye:  “Let me remind you of a few unpleasant consequences that I had before the crash. I had defamatory pamphlets placed on my Amazon ‘sell by’ page (now removed), I received emails of the most horrendous character, and blog views were published of an appalling nature”.

As our Editor Phil Parry said:  “To paraphrase a philosopher ‘I may not agree with what  you say, but I will fight for your right to say it'”.

One leading network radio journalist told us who has also been the target of insults on social media after reporting controversial cases:  “It’s not ME saying it”.

But it seems whether or not The Eye are saying it is immaterial, our journalists too are the object of abuse of ‘an appalling nature’.

Tomorrow – the truth revealed about the colossal waste of taxpayers’ money by the BBC.