The Eye can exclusively reveal that South Wales could be hit by more bad news in the Cardiff Airport (CA) area after the disclosure that a state-controlled airline where the country is accused of supporting terrorism will suspend flights there, casting further doubt on the enormous hoopla when the route was announced and the huge amounts of public money ploughed into the institution, after one expert declared on social media about the airport “the situation is dire”.

The British Airways (BA) 747 fleet that has been parked near Cardiff is in the process of being scrapped, meaning fewer aircraft will be maintained and fewer engines overhauled at nearby Nantgarw, with the grim news coming amid other difficulties for BA, as the fleet is working at a fraction of its normal level because of the pandemic.

The Cardiff maintenance base belongs to BA but is leased from the airport,
and the passenger numbers too for CA are alarming – 1.6 million against 8.6 million for Bristol Airport.

This is for an airport bought by the taxpayer for £52 million when Glasgow Prestwick cost the Scottish Executive just £1.

In North Wales as well there could be repercussions as the company is also scrapping many of its old Airbus models, the wings for which are made in Broughton, where officials have already announced that 3,200 workers have been furloughed and production has been cut.

News of the huge number of those who have been furloughed at the plant, comes in addition to revelations that 500 people were also furloughed by the contractor Guidant.

But the airline industry has been no stranger to controversy and Wales has often borne the brunt of it.

Troubled Qatar Airways (QA) has made alarming headlines by announcing the suspension of flights from CA to Qatar’s capital Doha (as well as Birmingham).

Officials have claimed this is only for the winter because travel restrictions dictated weak demand, and flights are meant to re-start on March 28, although this is far from certain.

QA had orignally hoped to resume flights to CA in October but the current global crisis meant the airline was forced to focus on its most profitable routes.

Yet there has been more bad news for CA recently.

Only a few dozens tonnes of freight have been imported through the airport since May, and an expert who analysed the situation there, posted on Facebook “the situation is dire… the survival of the airport as a Civil concern is dependent on how long Mr Drakeford (Mark Drakeford – the First Minister of Wales [FMW]) is willing to pump our money into the place – plus a bit of luck” with a worried face emoji after the disturbing message.

Meanwhile the details of QA pulling out of CA until at least March call into question the immense fanfare which greeted the link-up when it was first announced.

In interviews, the FMW at the time, Carwyn Jones stated:  “We would like to work with his excellency (Akbar al Baker the Chief Executive of QA)“. He tweeted that he “welcomed” the first QA flight into CA and said it represented a “huge boost” for Wales.

The then Welsh Secretary Alun Cairns informed us:  “The new flight from Cardiff to Doha (Qatar’s capital) plugs our entrepreneurs straight into one of the most dynamic economies in the Middle East, and an airport which offers a further 150 global destinations”.

The flight to Qatar’s Hamed International Airport was described positively in the South Wales Echo as providing “capacity for 150,000 passengers a year, as well as significant freight capacity for Welsh exporters at around 10 tonnes a flight”.

When the first flight from Doha was due, WalesOnline reported faithfully the words of Roger Lewis, then Chairman of CA, when he said: “This is a pivotal moment for Cardiff Airport, for Wales and the South West of England. The far reaching consequences of this service for passengers and businesses will be transformational”.

The same praising word was used by the then Chief Executive of CA Deb Bowen Rees who told the South Wales Echo:  “The Qatar Airways service has been transformational…”

The airport’s Chief Commercial Officer Spencer Birns has stated baldly:  “Qatar Airways are committed to the route (with Doha) and we want them to be successful”.

In the light of the news now these comments are intriguing. 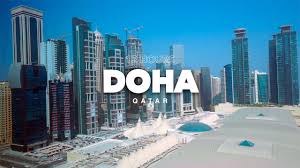 But Qatar has long been controversial and any link up with an airline controlled by this state was bound to hit the headlines for all the wrong reasons.

The UK Government has told potential travellers to the country they faced major risks, and it stated on its advice website:  “Terrorists are likely to try to carry out attacks in Qatar“.

It kept silent too as hundreds of thousands of Algerians protested, chanting “the people want the regime to go”.

Hundreds of millions of dollars in ‘aid’ money has been given as well by Qatar to Hamas, the group which holds sway in the Gaza Strip, and which has been designated by the USA as a terrorist organisation.

The Sunday Times, has revealed that the tiny desert state had secretly offered £400 million to FIFA just 21 days before the worrying decision was announced to hold the 2022 football World Cup there.

But it has not simply been the contentious association with an airline controlled by Qatar and an expert warning that the situation for CA was “dire”, which have been alarming – there has also been the money.

It may receive another £6.8 million, after getting a ‘loan’ of £21.2 million last year, which is itself an extension on the £38.2 million the airport could already ‘borrow’ from the Welsh Government (WG).

Perhaps if anyone is thrown out of work at Cardiff’s maintenance depot or in Nantgarw, and CA continues to be a poor relation to Bristol Airport, the situation might be seen as even more ‘shambolic’.

Tomorrow – after earlier revelations on The Eye about a controversial Welsh university, we publish more alarming disclosures about the Vice-Chancellor.

Our Editor Phil Parry’s memories of his astonishing 37-year award-winning career in journalism (which did NOT involve welcoming news of an airport linking up with a contentious state airline) as he was gripped by the incurable disabling condition Hereditary Spastic Paraplegia (HSP), have been released in a major book ‘A GOOD STORY’. Order the book now!