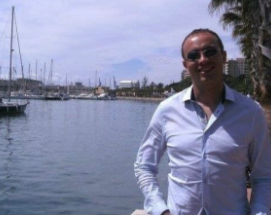 A crooked South Wales property ‘expert’ exposed by The Eye after he was jailed and had his legs broken when a drug deal went wrong, has changed his identity and is now selling expensive villas in Spain, we can exclusively reveal.

Howard Williams held questionable property ‘seminars’ at hotels where officials denied the booking, and now goes by the name of James Daniels.

He gives an address in Hengoed, and his company is known as ‘Select Murcia’, selling villas worth hundreds of thousands of pounds.

The website for Select Murcia has not yet been built, however the domain has been registered.

The real Select Murcia is in fact an upmarket car business.

But with his own ‘company’ Williams advertises one property saying: “Our beautiful Villa boasts luxurious accommodation inside and out”.

He uses the reputable firm ‘Owners Direct’ to advertise the properties.

Yet Williams’ former partner told us Williams was a “sick man”, and he too was conned by his one-time ally.

Sam McManus, or Georgeson, approached us and said:  “He (Williams) has fooled many people and I can only be grateful that there are good investigative journalists like you guys who expose greedy people like him”.

He added:  “When the lies and the truth about him came to light on this website it literally broke me and reduced me to tears.

“It is embarrassing to admit that I am yet another victim of his greed.”

The man who had him ‘fooled’, Williams, has a long prison record for fraud, disclosed by us.

Over 10 years, his jail sentences totalled four years four months, and they involved 25 counts of deception.  

During a long-term investigation, with legal rules uppermost in our minds and while others in the Welsh media have published lists about food or the opening of bars, we have disclosed heartbreaking details from Williams’ father Bill, who ran a sofa business in South Wales, and believes his son stole about £250,000 from him in cash and stock.  

On another occasion Bill was called by the police to Clifton suspension bridge where his son was threatening to commit suicide.

His son claimed to provide property ‘training’ to the public at a Cardiff golf club earlier last year.

The ‘offer’ was removed from Williams’ Facebook site, where he was known as ‘The Shoes’, soon afterwards, and when The Eye contacted the golf club, they had no record of it taking place.

After we exposed him, his Facebook page became a ‘closed group’ which was only available to be seen by ‘UK investors’.

We showed how in the past he has teamed up with another man, jailed for drug offences.

After leaving prison he co-operated with a fellow ex-inmate, Leighton Saunders, to launch the ‘Crisis Housing Charity’ and asked for donations from the public.

In his new venture with Williams, money was ‘raised’ by events, ostensibly to help ex-convicts find homes.

Meanwhile Williams himself has gone from strength to strength, and made strenuous attempts to leave his past behind.

But on one property website an investor says he has been a victim of Williams recently.

“He is living in Spain now and he has until Friday to pay me the funds otherwise he will find me visiting his new found home.”

A telephone number was then offered for the man to be contacted.

It will be interesting to see how future contacts develop with Williams and his new company.

But as he is a former convict exposed by us, this should be avoided.