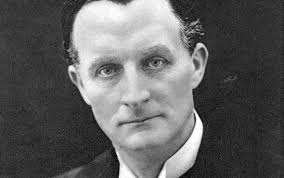 The Eye have teamed up with the Welsh thinktank ‘Gorwel’ to provide greater coverage of events for our readers.  Here our Editor Phil Parry describes a talk yesterday evening at Cardiff’s Ty Hywel about Sir Edward Grey, Foreign Secretary at the time of the outbreak of World War One.

The man most responsible for trashing Sir Edward Grey’s reputation was Wales’ very own Lloyd George.

He dished Grey particularly in his memoirs.

Grey was supposedly the man who did not prevent the appalling carnage of the First World War.

Mud sticks, and this stuck.

One leading commentator today has described Grey as “a bloody awful Foreign Secretary”.

Yet Professor Otte showed this was completely wrong.

In many ways Grey was a man ahead of his time.

He was, for example, deeply concerned with environmental issues, and was perhaps the UK’s first ‘Green’ politician.

While Lloyd George went out of his way to praise Hitler, calling him at one point “the resurrection”, Grey’s view was rather different.

Towards the end of his life he warned against the rise of Hitler, opposed appeasement, and spoke out against the persecution of the Jews.

Professor Otte showed how Grey was the “midwife” of the special relationship with the US and was crucial in persuading America to enter the Great War on the Allied side.

In his dealings with President Woodrow Wilson he was “patient and firm”.

He was Foreign Secretary for longer than anybody else, and became an MP at the tender age of 23.

He was a “young radical”.

Grey was free of the view (prevalent at the time) that Britain was an international pivot, and he wanted to extend state power to ameliorate bad working conditions (shades of Labour?).

Even the assessment of Grey not doing enough to prevent the outbreak of war is almost certainly wrong.

“He went as far as he could”, said Professor Otte.

Grey tried (and failed) to broker peace but the forces of war were too strong.

The conflict itself “challenged” him, but the story of a “weak politician” was a ‘myth’.

The reason for that myth developing is that Grey did himself no favours.

He openly proclaimed the importance of country pursuits and was aloof.

Today he would have seemed adept at “chillaxing” said Professor Otte.

The great thing about any talk is when it tells you something new – which this Gorwel talk did.