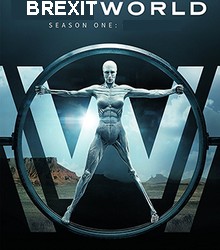 As your bellwether, I see it as my duty to keep up with and communicate to you all the latest TV and streaming entertainments. This is to deflect attention from your imminent appointment with the abattoir. Oops!

In episode 8, Season 1 of Westworld, a truly magnificent bingeworthy TV series currently streaming on Amazon, Delos Corporation VP Charlotte Hale says to Theresa Cullen (an executive) there needs to be a ‘blood sacrifice‘. And, indeed, it came to pass that a sacrifice was made – bloodily! Amen.

In the penultimate episode of BrexitWorld (Season 1 – the Rise of Boaris), in a dystopia as relentless as Westworld, the time for a blood sacrifice must be near. But who will it be?

Following the mass escape of the dissident traitors earlier in the series and the imminent encroachment by the Faragist zombie robot army, conditions in Tory HQ are getting desperate. The Gods must be appeased!

Arch Druid Cunnings (Ak…Ak…Akk) has decreed, after midnight consulting the entrails of an ancient Amstrad PC, robed sinisterly in black star spangled gilet and hole-dotted Billabong branded sweater held together by gold plated bulldog clips,  that someone must… ‘take the blame‘. Bigly.

“It is not enough” (to satisfy the Gods), he intoned gloomily. It is not enough that the (hated) ‘remnents‘ should take the blame for the failure to seal the doors of Parliament allowing the escape of the traitors before they could be slaughtered. This failure must be punished by a blood sacrifice! (chorus)‘Brexit! Thy Will be Done‘.

Who will be sacrificed? Who or what is at the centre of the Maze? (Cliff hanger)

Look out for it: The next season of Brexitworld (the Rise of Mogg) starts soon!

Phil Parry’s memories of his extraordinary 36 year award-winning career in journalism as he was gripped by the incurable disabling condition Hereditary Spastic Paraplegia (HSP), have been released in a major new book ‘A GOOD STORY’. Order the book now! The picture doubles as a cut-and-paste poster!