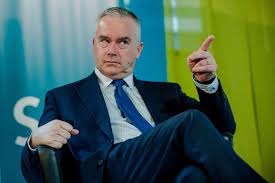 A prominent Welsh BBC newsreader has attacked a critique of the break up of the UK apparently flouting rules on impartiality which have been emphasised by his superior, The Eye can reveal.

The disturbing comment on Twitter by Huw Edwards that historian Max Hastings has made “errors” in his article, follows other alarming information about leading figures in the corporation.

Emily Maitlis, lead presenter of the BBC programme Newsnight, retweeted to her 425,000 followers a message by controversial broadcaster Piers Morgan that stated: “If failing to quarantine properly is punishable by 10yrs in prison, what is the punishment for failing to properly protect the country from a pandemic?”

Mr Edwards (whose account is labelled @huwbbc) also used Twitter to announce sarcastically:  “Difficult to cram so many errors into one paragraph but Max does it!  (Welsh flag) U.K. Breakup:  Good for Ireland, Bad for England, Scotland, Wales – Bloomberg” with a link to the Bloomberg Opinion piece by Mr Hastings.

In it Mr Hastings writes:  “It is close to impossible to imagine the Welsh making a successful pitch for independence, because their land is even more dependent on English largesse than Scotland: In 2017-18, it generated 27 billion pounds in revenues, but consumed 41 billion pounds of state spending. Moreover, polls show Welsh support for independence fluctuating between 10% and 30% of voters. The latter figure reflects short-term exasperation with the governing English Tories more than a serious nationalist surge”.

But Mr Edwards’ overall boss, The Director General of the BBC, Tim Davie, has been clear in his guidance that issues of neutrality are paramount – especially when impartiality is under attack worldwide.

Mr Davie will be aware of the pressure he is under because of recent opinion polls, and that it is crucial his presenters are neutral, because, in Mr Edwards case, some may agree with points in the Mr Hastings piece he attacked and, of course, pay his wages through taxation.

His rules declare: “If your work requires you to maintain your impartiality, don’t express a personal opinion on matters of public policy, politics, or ‘controversial subjects’”.

They also state that staff should avoid using disclaimers such as ‘My views, not the BBC’s’ in their biographies and profiles, as they provide no defence against personal expressions of opinion.

Yet Mr Edwards, has been accused of political bias in the past, after he ‘liked’ a tweet saying: “Vote Labour for the National Health Service”.

A recent Tweet he published also seems to contradict the rules, stating as it did (again sarcastically):  “The wacky world where Wales was never a nation and Pembrokeshire is the heartland of… Plaid Cymru.  Help!” and, like the more recent tweet, included a Welsh flag after the comment.

The picture he attached underneath it, is of protesters carrying Welsh flags aloft with a placard of END LONDON RULE clearly visible near the centre of the photograph.

Mr Edwards’ comments in support of Wales, or attacking The Conservatives are often seized on by a headline-grabbing nationalist website which is backed by the taxpayer, and the more recent one is no exception.

But the Editor of NC, Ifan Morgan Jones, is himself controversial, and has been in trouble for accepting an advert from the Bangor University’s (BU) journalism course that HE teaches on, which critics claimed was a blatant conflict of interest. They have also highlighted the disturbing fact that teaching ‘journalism’ in this context appears odd when being unbiased is an important part of reporting.

One NC ‘news’ piece said that:  “The county of Gwynedd in the north-west has seen the largest collapse in consumer spending as a result of Covid-19 in both Wales and England, according to business data”.

Yet Mr Edwards is not alone, and The Eye have been given details of other worrying comments on Twitter by Welsh BBC broadcasters which appear to break the rules on impartiality as well.

One of the personalities is controversial for other reasons, too.

A shocked viewer of a recent ‘re-tweet’ of a message by BBC rugby pundit, Jonathan Davies, told us: “This seems close to being a Covid conspiracy theory now”.

The remark which was ‘retweeted’ by Mr Davies stated that “lockdowns are unnecessary”, and conspiracy theories have a long as well as disturbing history.

They are particularly relevant now following the US Presidential elections, after Donald Trump used conspiracy theories to allege that the Democrats ‘stole’ the election but providing no evidence to support his baseless charge that there was ‘mass fraud’.

Mr Davies has also been accused of being ‘misleading’, publishing ‘rubbish’ and ‘ranting’, after stating on social media that contentious plans to re-develop a Cardiff cancer hospital would leave 60 per cent of a meadow available to walkers when campaigners say surveys have indicated all will be destroyed.

Contradicting him, one campaigner declared about the project to re-develop Velindre Hospital: “The whole area will be bulldozed, £27 million of public money just to access this unsuitable site…” 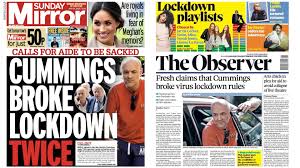 His BBC colleague Ms Maitlis has also made news before, other than retweeting the comment about quarantine by Mr Morgan.

She broadcast a diatribe about Dominic Cummings who had hit the headlines by taking a trip to Barnard Castle during lockdown.

But this, along with the remark on Twitter by Mr Edwards, appears to mean impartiality guidelines at the BBC count for nothing, after he highlighted what he claimed were “errors” in an essay about the break up of the UK…