Once more a contentious link-up has been highlighted between a state-run airline belonging to a country accused of supporting terrorism (Qatar), and headline-grabbing Cardiff Airport (CA), by mounting concern about recent events which have hit the news.

Controversy has grown over David Beckham’s ambassadorship for next year’s football World Cup in Qatar, amid fury from human rights campaigners. Top-level talks have also been held in the country between Afghanistan’s Taliban and China (where liberties are questioned as well).

It was reported this week that Mr Beckham has defended his lucrative posting, but others are less comfortable with Qatar’s approach to human rights, as well as the reasons for the World Cup being held there in the first place.

His ambassadorial work was first reported by The Mail on Sunday in February but is under renewed scrutiny after he travelled to the country this month. It was reported on Sunday that his involvement could be worth up to £150 million over the next decade, although sources close to Mr Beckham have disputed this figure.

Critics have accused him of “sports washing” Qatar’s record on human rights, including the fact that homosexuality in the country remains illegal.

There is much resistance from the authorities in China too to being Lesbian, Gay, Bisexual or Transgender (LGBT), with LGBT events banned in recent years, and for most of the twentieth century openly gay relationships have been illegal.

Under the Taliban regime, same sex love, attraction and relationships are punishable by death.

Meanwhile The Sunday Times, had earlier disclosed that Qatar secretly offered £400 million to FIFA just 21 days before the worrying decision was announced to hold next year’s tournament in the tiny desert state.

In Qatar now, amid those fresh questions being raised about Mr Beckham’s involvement, there have been other disturbing developments on the diplomatic front.

Mr Baradar attempted to assure Mr Wang, China’s foreign minister, that the security situation in Afghanistan was “under control”, despite increasing attacks from the Islamic State affiliate, Isis-K.

These latest revelations could heap more pressure on Cardiff Airport (CA) (Wales’ biggest), following the association being trumpeted with Qatar Airways (QA) three years ago, which was greeted with enormous fanfare by senior politicians and the mainstream media, despite it coming after alarming headlines concerning the country.

Qatar has been the subject of a warning from the UK Government to travellers going there, and holds pariah status among many other nations.

Eight sovereign nations around the world had severed diplomatic ties with Qatar and in July 2017 it was reported that the state had been cut off by some of its neighbours over alleged terrorist support. Qatar denies backing groups linked to Islamic State (IS), although it does admit it supports the Muslim Brotherhood. The emirate had refused to comply with an initial list of 13 demands, saying it would not agree to any measures that threatened its sovereignty or violated international law. But it was told by its neighbours that they wanted it to accept six broad principles on combating extremism and terrorism.

But when the first flight from Doha (Qatar’s capital) was due, WalesOnline reported faithfully the words of Roger Lewis, then Chairman of CA, when he said: “This is a pivotal moment for Cardiff Airport, for Wales and the South West of England. The far reaching consequences of this service for passengers and businesses will be transformational”. The same praising word was used by the Chief Executive of CA at the time, Deb Bowen Rees, who told the South Wales Echo (SWE):  “The Qatar Airways service has been transformational…”.

In interviews, Carwyn Jones (First Minister of Wales [FMW] when it was announced) stated:  “We would like to work with his excellency (Akbar al Baker the Chief Executive of QA)“. Mr Jones tweeted that he “welcomed” the first QA flight into CA and said it represented a “huge boost” for Wales.

But it is obvious that this ‘dynamism’ may be undermined by these latest revelations about Qatar, coming hard on the heels as they do of reported difficulties for CA.

Aggrieved potential passengers have turned to Bristol Airport instead of CA more and more during the pandemic.

Other recent comments about CA’s performance on FB have been extremely critical.

A further FB post from a different person was: “the situation is dire… the survival of the airport as a Civil concern is dependent on how long Mr Drakeford (Mark Drakeford – the First Minister of Wales [FMW] who was described as a “political star” in The Economist) is willing to pump our money into the place – plus a bit of luck” with a worried face emoji after the disturbing message.

This is not the first time, though, that complaints about CA or its services have surfaced publicly. A huge number of them followed a decision by the headline-grabbing Hungarian budget airline Wizz Air (WA) that it was postponing flights from the airport, blaming pandemic restrictions.

WA had been described as a ‘British’ airline in the South Wales Echo (SWE), and it IS London-listed, but eastern Europe-focused, and WalesOnline appeared to have reverted to ‘Hungarian’ in a more recent report about it postponing the flight. But the airline has hit the headlines for the wrong reasons. One traveller said recently on FB: “Just had our(WA) flights for Sep 2021 cancelled…”. Another angry passenger wrote:  “Cardiff seems doomed ,gutting , the Welsh government needs to help but it won’t, very sad.”  A further complainant said: “Drakeford’s (FMW) running CWL (the international code for CA) into the ground”.

Difficult comments like these followed other uncomfortable details for the airport, including about CA being hit harder than any other in the UK by the pandemic, raising serious questions among experts concerning why it was bought by the Welsh Government (WG) for £52 million, when Glasgow Prestwick was purchased by the Scottish Government (SG) for £1, and putting, critics say, its long-term future in doubt.

CA has also been forced to grapple with major challenges other than just the contentious link-up with QA, as well as, now, controversies about Mr Beckham’s role, and Qatar playing host to a meeting between China and the Taliban.

The Irish firm Stobart Air appointed a liquidator, and the sudden announcement that it was ceasing trading came hard on the heels of it revealing on May 5, two new routes to Dublin and Belfast, which were to begin from Cardiff later this summer.

CA has faced significant money issues too, even after its purchase by the taxpayer.

When the deal was announced, Welsh Conservative Member of the Senedd Cymru/Welsh Parliament (SC/WP) Russell George MS, who speaks on transport issues, said: “This is good money after bad.

Even following the acquisition by the public, cash problems have continued to dog CA. It has been revealed that Welsh ministers were considering ‘lending’ the airport millions of pounds, and officials had originally requested the huge sum of £28 million.

It was disclosed that officials were to carry out “analysis and financial due diligence” before the additional funding was approved, and that the £21.2 million ‘loan’ the previous year was itself an extension on the £38.2 million the airport could already ‘borrow’ from the WG.

But ‘diligence’ seems lacking if a headline-grabbing link-up has been highlighted between a state-run airline belonging to a country accused of supporting terrorism and CA, after growing controversy about Mr Beckham’s advertising next year’s football World Cup there, and concern mounting about the country playing host to the Taliban and China… 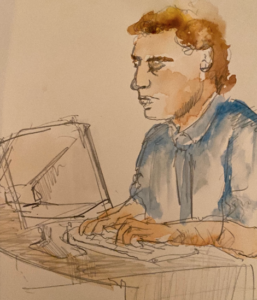 Tomorrow – why after 23 years with BBC Cymru Wales (BBC CW), and 38 years in journalism, our Editor Phil Parry knows there are major questions about the fundamental importance of having a free media, when modern technology means that it is being increasingly threatened.

Phil’s memories of his astonishing decades long award-winning career in journalism (which often involved providing awkward facts) as he was gripped by the rare neurological disabling condition, Hereditary Spastic Paraplegia (HSP), have been released in a major book ‘A GOOD STORY’. Order the book now!