Edwin Phillips reads an internal Conservative Party email from a stern Prime Minister Theresa May following her disastrous conference speech, warning warring colleagues to obey her commands, after hearing of a Monmouth woman who exercised her right to shepherd a flock of sheep across London bridge.

From: She Who Must Be Obeyed.

To:  Supposed Friends Who Hide Knives Behind Their Backs.

As I told you all at our Manchester conference, it is time to “shape up” or ship out.

Duty to the cause is paramount, and as I instructed, you should “do your duty by Britain”.

Concentrate on these words – not the fact that a prankster handed me a P45, I had a prolonged coughing fit, my speech was described as a “nightmare” and a “farce” by newspapers, or that two letters fell off the slogan behind me so it read:  “A country that works or everyon”.

We all need to take a leaf out of the book of Elaine Thomas from Monmouth.

As a Haberdasher and Freeman of the City of London (none of that ridiculous gender-neutrality here) she exercised her right to shepherd sheep across London bridge.

If only we could do that.

The difficulty in herding sheep to go in one direction is a fine analogy.

As Ms Thomas said:  “I love these ancient traditions”.

And so should you – like the tradition of ‘collective responsibility’.

Yes ‘unsackable’ Mr Boris Johnson, I am talking about YOU!

As you can all see by the Foreign Secretary’s appearance, he is obsessed with food. 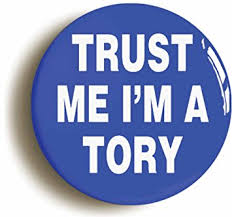 I know exactly what I am doing with Brexit, but Mr Johnson said about our esteemed European Union (EU), that he did not want to be in the “dingy anteroom of the EU, pathetically waiting for the scraps but no longer in control of the menu”.

Ms Thomas also said:  “It was an honour”.

You should all think of it as an honour too, to serve Britain, and, in fact, ME!

She “… prepared for the day” and you lot should prepare too – be ready to do what I say, or prepare to lose the General Election to the bearded lefty (Jeremy Corbyn).

Don’t you read the Monmouthshire Beacon?!

Honestly, I ask you – it is an important organ.

So forget The Times, which called us a “squabbling party” described my speech as a “shambles”, and said I was ‘begging’ you.

After all this was the so-called paper which reported that Grant Shapps was behind a plot to get rid of me.

How ridiculous – a former Party chairman would not do that.

I know you all read this nonsense.

How ridiculous those papers are!

Newspapers like the Daily Telegraph saying there is a ’50-50′ chance I will be ‘confronted’ by so-called ‘rebels’ and told to step down before the end of the year.

They reported that odious Ed Vaizey saying “quite a few people are firmly of the view that she (meaning me) should resign”.

So ignore all of them – especially those that said I ‘cried’ when we lost our majority.

Next week – suggestions to help the disabled, and more revelations about Welsh university management school which has been rocked by scandal.

Show your knowledge of key events and try your hand at our brilliant interactive quiz!