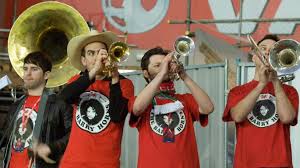 Angry Welsh football fans have received no response from the game’s governing body in Wales, when they highlighted their concerns about a controversial supporters’ brass band who have been banned by a social media company, denied calling a politician a “lying cunt” although we have found the evidence, proclaimed publicly “fuck you” to Brexiteers, and declared about a UK cabinet minister “Go fuck yourself you Tory bastard“, The Eye can disclose.

BBC Radio Cymru (BBC RC) and the BBC National Orchestra of Wales (BBC NOW) were due to stage the ‘Red Wall’ with The Barry Horns at Pontio in Bangor in three days time, although the venue has now been closed due to coronavirus/Covid-19.

But one football fan was so incensed, he contacted the governing body for Welsh football, the Football Association of Wales (FAW) and asked: “I would like to know what the FAW position is on the Barry Horns who having affiliated themselves to South Wales football now appear to have adopted an aggressive political agenda.

Another demanded action from the FAW but neither have received a reply.

The Barry Horns have been described as “a foul mouthed bullying group of yobs” in a comment to The Eye, and said on Twitter that they didn’t use the “‘C’ bomb”, despite the facts.

The ‘lying cunt’ insult was hurled at politician Nigel Farage and the ‘Tory bastard’ comment was aimed at Jeremy Hunt.

The band were barred from Twitter following remarks like these, and after the ban was lifted said they were “beautiful”, yet serious questions have been raised about this contentious decision.

On Sunday he said in his Sunday Times column:  “A new society will, I hope, emerge…”

Mr Edwards was talking about the coronavirus crisis, but his words could equally apply to The Barry Horns.

They clearly support their party because before the Twitter ban, they exhorted followers to “Join @Plaid Cymru”.

At the time they declared: “The Horns couldn’t wait to greet the train upon its arrival to Caerdydd. Next stop – 3 points!”.

Perhaps the FAW was too deafened by this party to respond to concerns raised by fans about The Barry Horns.

Tomorrow – when the BBC’s conflicts of interest guidelines are described as “useless” after a senior executive’s officials commissioned a programme hosted by a presenter he was having an affair with. 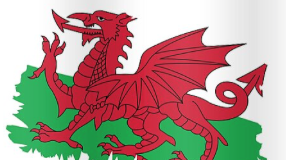 Civil war of the world