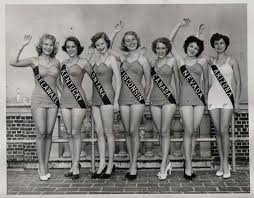 It will be interesting to see how one of the most important media websites in Wales marks International Women’s Day (IWD) tomorrow.

WalesOnline has not covered itself in glory promoting the values of female equality recently.

Only yesterday from the same Media Wales stable as the controversial website came a so-called ‘story’ which may give a disturbing indication of what is to come.

On page three of the South Wales Echo (the second most important news page after the front where there was a ‘tease’) a full picture of Elizabeth Jenkins was published in her Miss Wales 2018 sash, and another photograph of her at work as a mechanic.

Last month WalesOnline ran pictures of “The women aiming to win the title” with Ms Jenkins one of the contenders.

Three years ago, again on the eve of IWD, which commemorates the movement for women’s rights, the website promoted the competition offering pictures of “gorgeous girls” and “stunners”.

The headline in WalesOnline advertising a piece about the competition declared:  “Miss Wales 2015: Meet the 34 finalists hoping to wear the crown”.

But the Women’s Equality Network (WEN) was horrified.

In September 2015 the WalesOnline rugby correspondent Simon Thomas said on Twitter he was “mortified”, and we showed how another journalist there said it looked like it was stuck in the 1970s, when a ‘report’ was published on the wives and girlfriends of Welsh stars before the rugby world cup.

Sophie Harries was called:  “the model girlfriend of Scarlets star Liam Williams (who) has just been signed up to London model agency Models 1″.

But accusations of sexism have long dogged WalesOnline.

One reader of the website said sarcastically about their ‘reports’ on the Cardiff bar Coyote Ugly: “Scantily clad women dancing on a bar, serving drinks in-between, whilst men look on but can’t touch?No sexism there. At all.”

17 ‘stories’ were published in WalesOnline, in 2016 about Coyote Ugly.

An earlier item said:  “The girls will start their ‘Coyote Bootcamp’ on Monday ahead of the venues grand opening’.

“Following a weekend of auditions, owner’s (sic) at Cardiff’s new Coyote Ugly bar have finished their ‘Coyote Search’ and have recruited a number of girls.

“Nobee, Sally, Rio, Lauren and Chloe have all been chosen to work as Cardiff Coyotes.”

Yet the website is no stranger to being accused of having an out-of-date image of women.

It will be another major attraction to see how WalesOnline marks an event which commemorates the fight for women’s equality following articles like that.

This all comes at a difficult time for the website after Meghan Markle backed the “MeToo” campaign against sexual harassment, and urged women to “use their voice”.

Tomorrow – the female politicians central to the growing row over scrapping ‘Feminist Studies’ in Welsh exam syllabus, while the male education secretary in England has reinstated them.