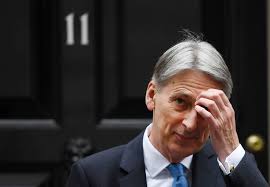 The Chancellor may have got away with it.

The newspaper headlines following the crucial last budget before Brexit two days ago, were fairly positive for Philip Hammond and his UK Conservative Government.

The Daily Mail (circulation 1.3 million) said on its front page “PHIL-GOOD FACTOR!” and inside offered “RAISE A GLASS …”.

The paper printed a large picture of Mr Hammond being congratulated by the Chief Secretary to the Treasury Liz Truss, and having his arm held by the Prime Minister Theresa May.

Presentational language is crucial and it is always pleasurable for the Conservatives if one of their budgets successfully causes a row in the opposition.

Labour’s Mayor of Greater Manchester, Andy Burnham, said:  “I can’t see how tax cuts for the wealthiest can be the top priority when our police are so stretched and there are people dying on British streets for want of a roof over their head.”

WalesOnline published a straight piece, saying:  “Chancellor Philip Hammond kicked off his Budget address with a pledge that the ‘era of austerity is finally coming to an end’”.

Even yesterday’s report into the budget by the Institute of Fiscal Studies (IFS) will do Mr Hammond no harm, taking away as it does from his reputation as cautious ‘spreadsheet Phil’ or gloomy ‘Eeyore’.

It said he had taken a gamble on the future health of the public finances by using better short-term borrowing figures to raise spending on the National Health Service (NHS).

But the announcements on Monday were a long way from the terrible disasters of the past.

In 2012 the then Chancellor George Osborne was accused of an ‘omnishambles’ budget with an increase in VAT on some hot foods.

It was dubbed the ‘pasty tax’ and he was forced to climb down.

Only last year Mr Hammond got into hot water over another issue.

There was an embarrasing U-turn when he said he planned to increase National Insurance (NI) contributions for the self employed and he was accused of acting against working people.

Mr Hammond eventually promised no increase in self-employed NI rates for the rest of this parliament.

His predecessor fared no better.

Mr Osborne had to abandon changes to disability benefit when the former Conservative minister, Iain Duncan Smith, resigned from his cabinet job following the budget in March 2016.

In 2015 Mr Osborne also ran into trouble when he announced changes to tax credits and was forced to abandon the plan within four months.

The change was slated to provide £4 billion of the £12 billion welfare cut promised in the Conservative manifesto.

But mistakes with budget announcements are not simply confined to the Tores.

Labour must also take their fair share of blame.

Alistair Darling was forced to water down plans to abolish the 10p tax rate in 2008 following a revolt on the Labour benches after MPs said the move would hurt the poorest workers.

Being known as the man who said “goodbye austerity”, as the Daily Mail puts it, is a lot better…