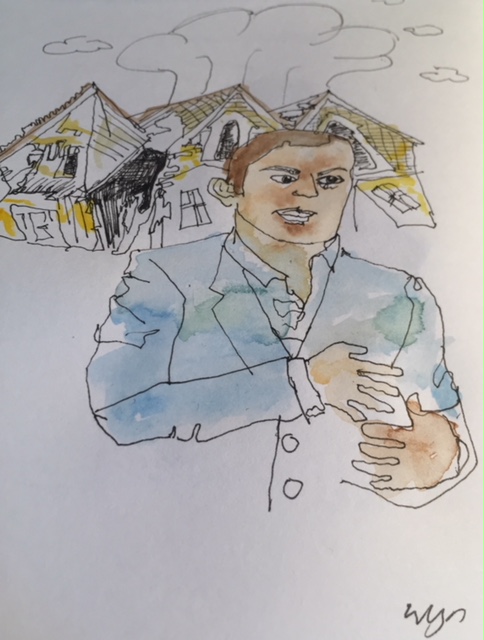 A Welsh former drug dealer and convicted conman exposed exclusively by The Eye but ignored by the mainstream media in Wales, who had his legs broken after a deal soured and sent abusive messages to our Editor, his friends as well as his family, is now involved in another venture, we can reveal.

Howard Williams also goes by the name of James Daniels and is connected with the ‘Blanco’ bar/restaurant in Murcia, Spain which opened last month offering guests food and drink.

One diner said excitedly on the bar’s Facebook page: “Great to see you in the top 10 and deservedly so! Well done!”.

Another said: “Wow Just Wow.  Took my wife for our first visit here tonight all we have both said is omg, omg.  Gotta be up there with the best food I have ever experienced.  Place is 5*  Owner is amazing and so attentive.  Staff can’t do enough for you.…”

In response to this there were approving comments by Williams/Daniels and his wife Lisa.

Evidently the staff at ‘Blanco’ are proud of their ‘success’.

Also on the bar’s Facebook page was a picture of a man holding a cake while another cut it.

Perhaps the fans of ‘Blanco’ are unaware that Williams/Daniels has a string of jail convictions for fraud.

Over 10 years his jail sentences have totalled four years four months, involving 25 counts of deception, and he has been made bankrupt three times.

In one of his previous ‘careers’ Williams/Daniels has tricked people into thinking he is a property ‘expert’.

On a property website, the anger of one individual is clear:  “He (Williams/Daniels) makes you pay circa £10k deposit and then disappears into the sunset”.

At a property event in the South of England The Eye were told that an investor had lost £30,000 to Williams/Daniels.

His exploits have even been the subject of our satirical writer Edwin Phillips.

Williams/Daniels has boasted of owning a boat and a jet ski which he has said on Facebook was for sale.

He claims to have driven expensive cars on his new property website, and says on social media he has turned £56 into £1,000 in “24 hours”, yet some critics have questioned how much of this is true.

One who is owed thousands of pounds by Williams/Daniels told The Eye:  “This is all made up.

“He lives in a complete fantasy world!”.

Following earlier stories about him on The Eye, this comment was posted on our website in late summer: “Having become a ‘Partner’ in a new Italian Restaurant called Blanco on the Mar Menor Boulevard, Los Alcazares, Williams/Daniels is now pressing ahead with the publicity and promotion aspects – which seem somewhat unusual for a new Restaurant to open at the end of the summer, when visitor numbers are rapidly decreasing, as schools (both British and Spanish) start to re-open”.

We have now tracked down the bar/restaurant.

The opening of ‘Blanco’ came amid revelations on The Eye that Williams/Daniels has ‘knocked’ many people by not paying his bills, among them are some we have spoken to who are owed huge amounts.

In a YouTube video where he is interviewed about his ‘property skills’ Williams/Howards claims he had a “massive” estate agency business, but went from earning £20,000 a week to having just £56 in his pocket and living on the streets.

But The Eye have reported that his own father, Bill, describes his son as a “complete crook”, how he was called by the police to Clifton suspension bridge where Williams/Daniels was threatening to commit suicide, and how he spent part of a Christmas day outside the walls of Cardiff jail to be near his son inside.

Bill Williams, who ran a sofa business in South Wales, believes his son stole about £250,000 from him in cash and stock.  

Williams/Daniels has also said he performed at expensive property ‘seminars’ in upmarket hotels or golf clubs around South Wales but customers were duped there once again.

The ‘offer’ was removed from Williams/Daniels’ Facebook site, where he was known as ‘The Shoes’, soon afterwards, and when The Eye contacted one of the hotels, officials had no record of it taking place.

Williams/Daniels’ former business partner, Sam McManus (also known as ‘Georgeson’), has admitted to us he too was fooled by him and that he was a ‘sick man’.

Mr McManus explained how he was conned along with everyone else.

He told The Eye:  “He (Williams/Daniels) has fooled many people and I can only be grateful that there are good investigative journalists like you guys who expose greedy people like him.

Before ‘Blanco’, Williams/Daniels was also in charge of evenings at the ‘Discoteca CopyRight Roldan’ in Spain, but new adverts for it were removed after our earlier reports about him on The Eye.

The discotheque’s Facebook page has not had a post since February 20 at 7.41am – just after we published disclosures about the man who ran it.

Following our disclosures, Williams/Daniels asked a specialist company how to “get rid”‘ of the “negative” stories about him on the internet.

He wrote:  “When I google James daniels spain or James Daniels property or James Daniels murcia a load of website links appear for the-eye.wales which are negative reviews and not true (The Eye – nothing is untrue). How do I get rid of these an(d) how much does it cost? Also how long does it take?”.

Apart from having his legs broken when an illegal drugs deal went wrong, we have also disclosed how formerly Williams/Daniels has teamed up with another ex-criminal from South Wales, who had been put behind bars for drug offences, to start a ‘charity’.

He launched the ‘Crisis Housing Charity’ and asked for donations from the public in a venture designed ostensibly to help ex-convicts find homes.

Our Editor Phil Parry as well as his friends, wife and children, have been subjected to a torrent of abuse on social media from Williams/Daniels and his supporters, following our revelations.

His wife has also bombarded The Eye and Mr Parry with insulting messages on Facebook.

Williams/Daniels has accused The Eye and Mr Parry, of ‘bullying’ ‘stalking’ and ‘harassing’ a man with a mental illness, yet it is others who deserve sympathy.

Attention shouid be focused on those whose lives have been ruined by the drug dealing of Williams/Daniels, and the many who have been tricked into giving him money for it never to be seen again.

These are the real victims.

Perhaps they are also victims of his lies at ‘Blanco’.