Home Investigations Right round the bend 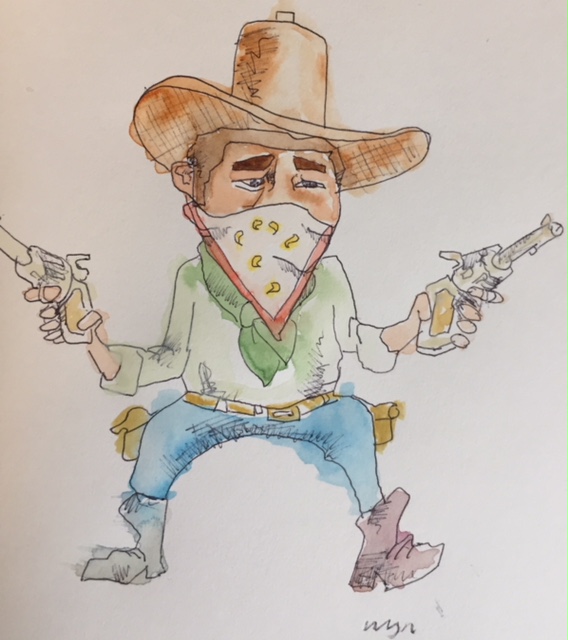 An elderly right wing blogger establishing a Welsh independence party, but who was forced to find a new venue after The Eye exposed his support for a 1960s paramilitary organisation, is so worried about infiltrators he is demanding background checks by potential supporters, it has emerged.

Royston Jones, has posted a picture on his blog, ‘Jac o’ the North’, of the Free Wales Army (FWA) leader toting a gun, and described our Editor Phil Parry as a “lying bastard”, despite the fact that in 23 years at the BBC he has won numerous awards for his journalism.

He wrote:  “Parry is the kind of ‘journalist’ that gets the profession a bad name”.

Mr Jones has accused us of being part of the Labour party and the police, even though many of our reports have focused on the misdeeds of the Welsh Government controlled by Labour, or ill-judged inquiries by the police.

Now he has told those who want to come to his meeting in Aberystwyth that he must take “precautions”, and demanded people who have contacted him explain their background.

The Eye scuppered the original plans by Mr Jones to start his new party, after we revealed his links to the FWA and how he had posted the picture of Cayo Evans pointing a pistol at the camera as others looked on laughing.

The first hotel where he had planned to launch the party cancelled his reservation for a large room, following our disclosure.

Mr Jones had booked a room for 50 – 60 people at the Belle Vue Royal Hotel, on Marine Terrace in Aberystwyth, for the event.

But the hotel was so worried it returned the money.

Officials said they had “… concerns (and) we have cancelled your meeting room with full refund of payment”.

He then advertised on his blog a new venue for four days time, with the words: “I am delighted to announce that a meeting has been arranged for November 18th in Aberystwyth to discuss the formation of a new political party to defend Wales’ interests”.

Apart from calling our Editor “a lying bastard”, he also dubbed Mr Parry “vermin” after we disclosed the details of his past.

He seems to object to the fact that we have reported how he described Cayo Evans, as a “comrade” as well as “friend”.

Yet the ‘inventions’ we have reported, were from Mr Jones’ own blog – including the picture of Cayo Evans holding a gun.

The FWA was a paramilitary Welsh nationalist organisation, formed at Lampeter, Ceredigion, in 1963.

Its objective was to establish an independent Welsh republic.

It has been reported that the Official IRA (OIRA) had given or sold most of its weapons to the FWA as part of its turn away from political violence, in the 1960s.

Meanwhile, Mr Jones’ vitriolic writings on his blog have proved controversial, and one reader told us:  “I feel like taking a bath after I read his stuff”.