Home News Sex in the city 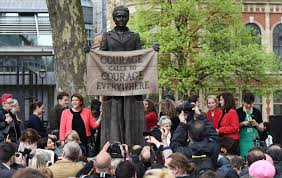 It means saying something that gives one view, then publishing another piece and reporting the exact opposite.

Yesterday the South Wales Echo faithfully reported the unveiling of a statue of Millicent Fawcett who had fought for women’s rights with a large picture and the headline:  “Bronze statue of suffragist unveiled”.

But in the past the Echo has been less than supportive of women’s rights after publishing stories which promoted a beauty contest condemned by the Women’s Equality Network (WEN).

Last month on page three of the Echo (the second most important news page after the front where there was a ‘tease’) a full picture of Elizabeth Jenkins was published.

She was shown in her Miss Wales 2018 sash, with another photograph of her at work as a mechanic.

The Echo’s sister media website has not covered itself in glory pursuing women’s rights either.

The headline on the website advertising a piece about it declared:  “Miss Wales 2015: Meet the 34 finalists hoping to wear the crown”.

The previous month WalesOnline had run pictures of “The women aiming to win the title” with Ms Jenkins one of the contenders in the beauty contest.

Yet while Millicent Fawcett was fighting for women’s rights 100 years ago, it appears WalesOnline has yet to arrive in this century, and knowledge by its Editor Paul Rowland of real journalistic stories and the law is thin.

His website has a long history of ‘reporting’ sexist ‘stories’.

In 2016, 17 articles were published on the website about the Cardiff bar Coyote Ugly where women dance for customers.

Readers though were unimpressed.

One noted sarcastically in the comments section:  “Scantily clad women dancing on a bar, serving drinks in-between, whilst men look on but can’t touch?No sexism there. At all.”

In September 2015 the WalesOnline rugby correspondent Simon Thomas said on Twitter he was “mortified”, and we showed how another journalist there told us how it looked like it was stuck in the 1970s, when a ‘report’ was published on the wives and girlfriends of Welsh stars before the rugby world cup.

Yet WalesOnline has also employed the ‘reverse ferret’ technique.

In February it described as a “defining moment” Millicent Fawcett’s “struggle” when she launched the National Union of Women’s Suffrage Societies (NUWSS) IN 1897.

The website said:  “This brought a new unity and momentum to campaigning”.

Adding:  “The first branch was formed in Wales in 1907 at the Llandudno Cocoa House, with one launched in Cardiff the next year”.

Perhaps it will be a ‘defining moment’ the way the Echo has reported the unveiling of the statue of Millicent Fawcett who fought for women’s rights.