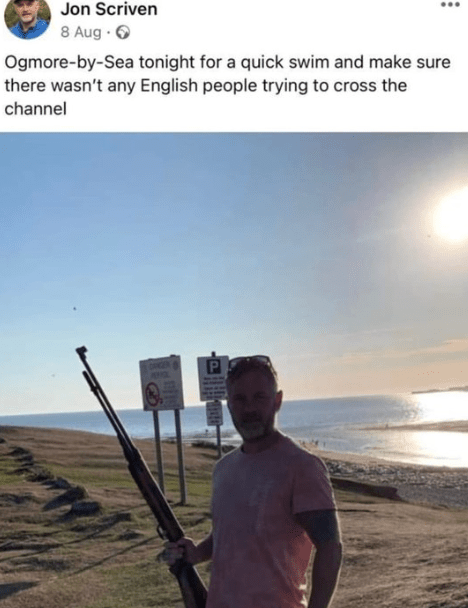 A senior figure in Plaid Cymru (PC), and former member of what is now the Welsh Parliament/Senedd Cymru (WP/SC), showed his ‘love’ of a controversial social media post which made headlines across the UK, picturing a fellow nationalist councillor brandishing a gun saying he was keeping out English people, we can exclusively reveal.

The ‘heart’ emoji (one up from a ‘thumbs-up’ ‘like’) was posted on Facebook (FB) by ex-leader of Caerphilly County Borough Council (CCBC), PC’s Lindsay Whittle, and the picture with accompanying message is now under police investigation.

The photograph he ‘loved’, was by Councillor Jon Scriven who has formally apologised, and been suspended by PC, after publishing it on the same site. It portrayed himself on a beach holding the rifle, saying: “Ogmore-by-Sea tonight for a quick swim and make sure there wasn’t any English people trying to cross the channel”.

His colleague on CCBC, Cllr Whittle, was a member of the National Assembly for Wales (forerunner of the WP/SC), representing the South Wales East region for PC, from 2011 to 2016. But the post was highly contentious, and came hard on the heels of another huge scandal involving the party – letting back in disgraced MP, Jonathan Edwards, who was cautioned by the police for assaulting his wife, although he decided not to take the group whip in Westminster.

The post by Cllr Scriven of him holding a gun, which was first uncovered by The Eye, caused an enormous storm, in the media, legally, and in the political world.

The Welsh Liberal Democrats (WLD) said: “There is a clear implication of violence and xenophobia”, and the leader of the Welsh Conservatives (WC) in the WP/SC (Andrew RT Davies) stated that he was “Speechless”.

As well as noting implied violence, the WLD also announced on FB: “Whether or not it was intended as a joke or not, it is entirely inappropriate for an elected official to make such comments, when they should know better

“Plaid Cymru must now do the right thing and suspend the councillor in question”.

Labour member of the WP/SC for Caerphilly, Hefin David, described the post as “…incredibly concerning. We should be seeking to unite people and address real concerns like the cost of living, not post disturbing images that are calculated to divide us”.

PC pronounced grandly that the post was inappropriate, and Cllr Scriven was indeed suspended pending an ‘investigation’. South Wales Police (SWP), meanwhile,  confirmed that an allegation of “malicious communications” had been lodged. Officers said they were “aware of a post on social media featuring a man brandishing what looks like a rifle at Ogmore-by-Sea”.

Yet despite this apology, the story about his post broken first by The Eye, was already being followed up in the mainstream media.

In the hours which came afterwards, the website WalesOnline (WO), published: “A social media post surfaced online which showed Jon Scriven posing with a gun”. Other ‘stories’, though, were deemed more important and given greater prominence on the site, such as one headlined: “Three-year-old egged in face by yobs leaving her bruised and sobbing”. 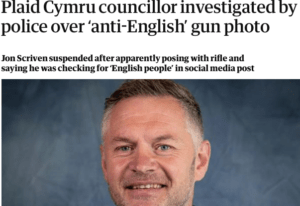 The BBC said: “Police are investigating a social media post which appeared to show a Plaid Cymru councillor posing with a gun to make sure there weren’t “any English people trying to cross the channel”.

The Guardian reported that: “Police are investigating a social media post from a Plaid Cymru councillor apparently posing with a rifle near a Welsh beach and commenting that he was checking “there wasn’t any English people trying to cross. 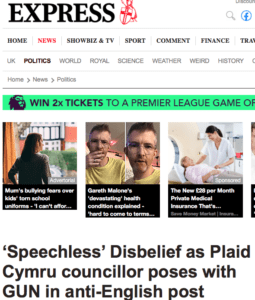 The Daily Telegraph wrote: “A Welsh nationalist councillor is being investigated by police after posing with what looked like a gun and saying he was stopping “any English people trying to cross” the Bristol Channel”.

LBC (Leading Britain’s Conversation), The Independent, Sky, Mail and the Express carried the story, with the latter’s opening paragraph being: “Officers at South Wales Police are investigating a report of malicious communications after a post appeared on Plaid Cymru councillor Jon Scriven’s Facebook page”.

Even The Bolton News covered details of the extraordinary saga.

Andrew RT Davies leader of the Welsh Conservative group in the WP/SC since last year, was incensed, and re-posted the photograph, proclaiming that he had become: “Speechless. This is a @Plaid_Cymru councillor. @Adamprice (the leader of PC) cannot let another scandal rage on without decisive action. This sort of xenophobic attitude is beneath us.”.

The scandal Mr Davies refers to, is about Mr Edwards being let back in to the party after what had happened. Soon after this story hit the news, it emerged that before the 2015 General Election (GE), Adam Price’s predecessor as head of PC (Leanne Wood), had written (on Twitter):“… Re-elect the fantastic Jonathan Edwards in Carmarthen East and Dinefwr.”.

But after the re-admission of Mr Edwards to the party, she decided Mr Edwards was not actually ‘fantastic’, and she tweeted: “This sends the message that women don’t matter and that survivors of domestic abuse don’t matter. I always believed Plaid Cymru to be better than this.”

Her successor (Mr Price) joined in, saying: “His (Mr Edwards’) actions do not represent our values and his position as an MP sends the wrong message out to domestic abuse survivors in Wales and beyond”.

The party was split over re-admitting Mr Edwards, but he has portrayed himself as a victim, although this does not compare to the suffering of the woman he assaulted.

Mr Edwards has declared self-pityingly, that he was the subject of “vindictive and vengeful coordinated political attacks”, and he was left feeling suicidal.

Ruptures within PC were laid bare, and they were encapsulated by the member of the WP/SC, Sian Gwenllian, Communications Director on PC’s ruling National Executive Committee (NEC), who said: “If an elected politician has severely damaged the integrity, the credibility and the reputation of our party by contravening one of its core values, then that person should no longer represent the collective, democratic voice of our members.

The Chief Executive of the gender equality organisation Chwarae Teg, Cerys Furlong, said PC should think again about its decision and the message it sent to all women, declaring: “Our politics must be an environment in which women are safe and where violence, harassment and abuse are stamped out”.

Clearly it is not an environment for PC safe from media approbation, when a senior figure in the party, showed his ‘love’ of a social media post, which pictured a fellow Welsh nationalist councillor holding a gun to ward off the English…