Home Humour A picture is worth a thousand words… 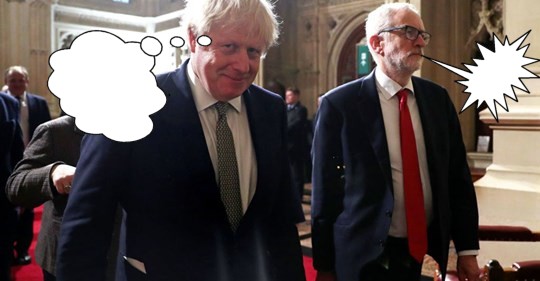 For this one we don’t just want you to supply a possible conversation between Boris Johnson and Donald Trump, but the thoughts of the Prime Minister after his thumping 80-seat majority in the General Election, and the words of the leader of the opposition, Jeremy Corbyn, as he contemplates the future for him and his party at the state opening of Parliament.

Following Labour’s worst election result since 1935 no wonder Mr Johnson is grinning and, as the press reported, Mr Corbyn was ‘stoney-faced’.

This is a competition you are unlikely to find in the mainstream media!

Here, as usual, are some possibilities to get you started:

We’ll announce the winners in a few days.

Our Editor Phil Parry’s memories of his astonishing, lengthy award-winning career in journalism as he was gripped by the incurable disabling condition Hereditary Spastic Paraplegia (HSP), have been released in a major new book ‘A GOOD STORY’. Order the book now!

We are NOT devo!

The Eye - 7th August 2020
%d bloggers like this:
We use cookies to ensure that we give you the best experience on our website. If you continue to use this site we will assume that you are happy with it.OKNORead more