Home Investigations Browned off part one 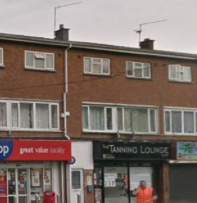 South Wales jailbird Howard Williams/James Daniels who had his legs broken when a drugs deal went wrong, spent years in prison, who announced his engagement even though he was still married, and was exclusively exposed by The Eye, is running yet another business now in trouble, we can reveal.

Conman Williams/Daniels has always run crooked cafes or ‘Estate Agency’ businesses, but is now manager of The Tanning Lounge in the Llanrumney area of Cardiff, and it has shut its doors due to the coronavirus (Covid-19) lockdown.

Someone close to him who has contacted us said he has “sucked everyone in” and that after ‘running’ several other firms, he owes staff as well as landlords “lots of money”.

The details of the latest activities of Williams/Daniels provide a fascinating insight into the life of a man who has formerly dealt in unlawful drugs, and needed hospital treatment after his legs were smashed following a badly-executed illegal drugs deal.

He is also a convicted fraudster who has tricked people out of thousands of pounds, some of whom have been left mentally damaged by losing large amounts of money to him.

Before returning to South Wales, Howard Williams had moved to Murcia in Spain, changed his name to ‘James Daniels’, and hid the fact that he has been in prison for lengthy terms on a variety of charges (his own father has described him to us as a “complete crook”).

But as with our other discloures there is mounting consternation that the details have not been covered by the mainstream media in Wales.

Williams/Daniels has admitted to being imprisoned but described it in a Facebook post as a “short while”, when his convictions in fact total more than four years.

His extraordinary exploits have been the subject of our satirical writer Edwin Phillips, (see next week).

Williams/Daniels has boasted of owning a boat as well as a  jetski, which he has said on Facebook was for sale.

When he was an ‘Estate Agent’, he posted a YouTube interview on his property website where he bragged about his property ‘expertise’. He claimed he had a “massive” Estate Agency business, but went from earning £20,000 a week to having just £56 in his pocket and living on the streets. Williams/Daniels also alleges he has driven expensive cars, and said in the interview that it took just  “24 hours” to turn the £56 into £1,000, yet some critics have questioned how much of this is true.

He has too received a jail sentence for deception as founder and president of The Welsh Martial Arts Association. He had been accepting money from affiliated dojos for insurance cover, not arranging the required cover and pocketing the cash.

Williams/Daniels has been in charge as well of marketing for a Spanish wine bar called ‘Blanco’ in Murcia, and he announced his engagement to Danni (or Danielle) Greer on the bar’s website, where the ‘liar’ post was also published.

But our journalists have divulged how over Christmas and New Year, before the bar went under, he warned customers on social media that they could no longer accept credit cards at Blanco, even though these periods are the busiest times of year for restaurants and it is almost unheard of for them only to take cash then.

Bill Williams, who ran a sofa business in South Wales, believes his son stole about £250,000 from him in cash and stock.  He has posted on Facebook that he and his wife knew of their son’s past and on occasions did not like him, although always loved him.

She worked for Digby Brown solicitors in Glasgow as a ‘Welfare Rights Advisor’ specialising in serious injury so she should know the law well, as well as, presumably, the leg injuries after one drug deal went wrong of her ‘fiancee’ Williams/Daniels.

Perhaps she also deals with bankruptcies which could be useful if, as Williams/Daniels critics claim, The Tanning Lounge is heading that way.

Browned off part two is next week – when our satirical writer Edwin Phillips reads an alternative Press Release to the mainstream media from The Tanning Lounge, written by Williams/Daniels.

Tomorrow – we ask whether the Welsh economy could actually be better off than other country’s once the lockdown is over.

Our Editor Phil Parry’s memories of his extraordinary 36-year award-winning career in journalism as he was gripped by the incurable disabling condition Hereditary Spastic Paraplegia (HSP), have been released in a major book ‘A Good Story’. Order the book now. The picture doubles as a cut-and-paste poster!