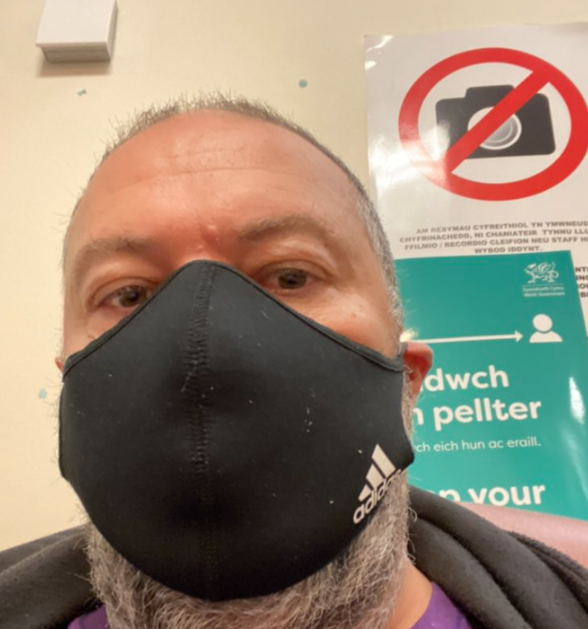 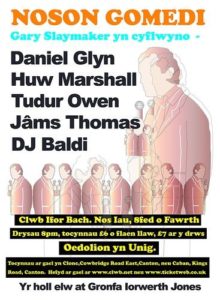 A ‘comedian’ who made sick ‘jokes’ about a murdering gunman, used bad language to abuse publicly prominent politicians, was placed under police investigation and is allegedly starting a new Welsh media service receiving for it hundreds of pounds in pledges from the public, attended hospital but proclaimed jokingly that he doesn’t understand social distancing rules, The Eye can reveal.

Huw Marshall published a picture of himself on social media wearing a mask at a clinic beneath a sign urging people to keep their distance, but asked provocatively what it meant with a laughing emoji after the comment.

Yet he has fallen foul of rules before – but on Twitter.

He was severely reprimanded because one of his accounts  “violated the Twitter Rules”, and it was found that another, “Welsh Bollocks”, had also broken their regulations.

But his remarks on another social media platform, Facebook (FB), have been little better.

Two people died and a police officer lost the sight in both eyes when rampaging gunman Raoul Moat shot them, yet despite this on July 8, 2010 – with him trying to escape from armed police – Mr Marshall published a message on his FB site, reading: “Hi I’m a sexy 19 year old blond (sic) from the North East of England looking for some fun. 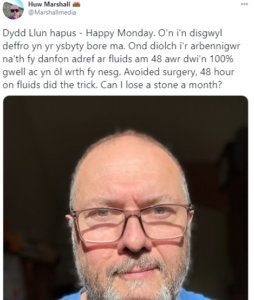 But it is Mr Marshall’s weight, as well as his ‘comedy’, which appears to be a problem, and may be an issue in writing stories about overweight people with his ‘new media’ service for Wales.

While he was in hospital he posted on social media that he had to lose a large amount of weight over a short time, and that this could prove difficult.

Neutrality is a fundamental tenet of journalism, but this too could be hard for Mr Marshall, and given that the Welsh Government (WG) is run by another party from the one he represented, this might be difficult for an organisation like Mudiad Meithrin (MM) which helps parents find Welsh-speaking child-care and has announced he was to be their new voluntary director.

In 1992 he stood as PC’s Parliamentary candidate in Cardiff Central, coming fourth with just 748 votes, however his plans to stand for election as a councillor were scuppered when it emerged that he had posted the so-called ‘jokes’ about Moat, and published the offensive remarks to politicians on social media.

More recently Mr Marshall has claimed he is thinking of a ‘game’ about independence for Wales and needs assistance.

He has said on Twitter: “Are there any indygame devs out there?  I need your help with an AMAZING project….

Even in November 2016 (years after his indiscretions) he was used as an ‘expert’ on the Welsh media.

Mr Marshall formed part of a panel on The Future of the Welsh Media at the University of South Wales (USW) in Cardiff along with Bethan (then) Jenkins AM, Martin Shipton (then) Chief Reporter of the Western Mail and Dr Ruth McElroy of USW.

The discussion was described in literature afterwards as “packed” (sic) and Ms Jenkins said: “although broadcasting is not devolved, it’s an area of great importance to public life in Wales”.

But financing his many ventures appears problematic, and Mr Marshall has also stated on social media: “Just had feedback on an unsuccessful funding bid. I use the word feedback in the loosest possible term…..”

Yet from his own account on Twitter he appears to have received public money for a ‘language project’ which has been endorsed as “Newyddion da (Good news)” by Helen Mary Jones MS.

He said a woman had proclaimed: “‘We know the Welsh…they took our land'” and he added: “It taught me a lesson about colonialism…”

Mr Marshall has, too, used the internet to announce his ‘plans’ for the ‘unbiased’ new ‘news’ service for Wales, called New Media Wales (NMW), to which huge amounts of money have been pledged by members of the public, which could also have been attractive to MM officials.

His ‘proposals’ for NMW have featured on HoldtheFrontPage.Co.UK – a website for UK journalists.

Our investigations revealed that a few weeks ago Mr Marshall had in fact a total of 179 patrons pledging £1,221 per month, but he has said he needed a lot more.

Yet Mr Marshall is clearly not short on confidence (and that too may have been among the reasons MM was so ‘delighted’ with its catch) because he presumably believes he will reach this target for patrons.

Mr Marshall, though, appears undaunted by the criticism and has said on social media:  “I could go in to the BBC tomorrow and save millions without impacting the content they produce…”

One potential donor has announced that he wants the operation to be “unbiased” and not “nationalist” – possibly ignorant of the ‘co-ordinator’s’ background. 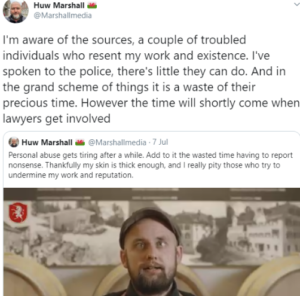 Yet it seems the police HAVE had time to investigate Mr Marshall for alleged harassment.

On Twitter he told South Wales Police (SWP) that he intended to make a complaint, however officers responded by informing him that they have a “responsibility to investigate any reports”, and they were were provided with a screenshot of Mr Marshall’s website Welsh Bollocks where he admitted sending a fake takeaway delivery to the home of someone he did not like.

Meanwhile The Eye’s research has confirmed that Mr Marshall’s plan is to run NMW with just four reporters, but there are serious questions as to whether a ‘national media service’ can be delivered with such a small number, and there is no registration for NMW at Companies House.

Despite this, to start such a service he will have to know the law and not make fun of it as he has done…