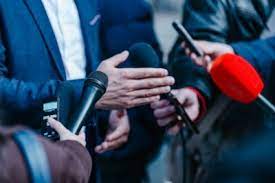 Celebrations after Wales qualified for the World Cup finals in Qatar, have put centre stage huge controversies affecting the host nation, including allegations it offered hundreds of millions of pounds to attract the tournament in the first place, and that homosexuality there is illegal.

The mainstream media in Wales, however, have largely concentrated on the ‘triumph’ of earning a place. 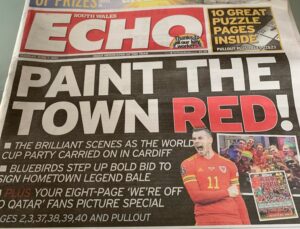 The Cardiff-based, South Wales Echo (SWE), for example, splashed on its front page with the headline: “PAINT THE TOWN RED!” (in colour), and gave readers an eight-page ‘WE’RE OFF TO QATAR‘ FANS PICTURE SPECIAL.

BBC Cymru Wales (BBC CW) merely reported: “Head of Welsh football Noel Mooney said the team would use the event as a ‘platform’ to discuss human rights in Qatar, where homosexuality is illegal”.

The website WalesOnline faithfully reported as a POLITICAL story, the concerns of those in charge, with the First Minister of Wales (FMW), Mark Drakeford, saying: “We are absolutely delighted that Wales will be represented at Qatar, but we should not look the other way from the reservations that we would have as a nation from some of those human rights issues that we see there”.

Yet the country’s successful bid to stage the competition has itself made disturbing headlines, in UK NEWSPAPERS.

The Sunday Times revealed that the tiny desert state had secretly presented £400 million to the world football governing body, FIFA, just 21 days before the worrying decision was announced to hold this year’s contest there.

But it is human rights in Qatar, which have come under particularly close scrutiny.

Homosexuality is illegal there, with a punishment of up to three years in prison, and it carries the possibility of the death penalty for Muslims under sharia law.

There are also prevailing cultural mores which view homosexuality, and cross-dressing, negatively.

It’s been reported that a number of Wales football fans have pledged to boycott Qatar despite their joy at the Welsh team qualifying for a World Cup for the first time in 64 years.

The Qatar government does not recognise same-sex marriage or civil partnerships, nor does it allow people in Qatar to campaign for Lesbian, Gay, Bisexual and Transgender (LGBT) rights.

The academic and writer Laura McAllister tweeted (with a link to her article in the Western Mail [WM]) that there was “…no time to waste if we’re (Wales is) to ensure sustainable benefits from (Hashtag) Qatar 2022“.

This is highly-ironic as she is gay herself, and Professor McAllister (with her partner) has adopted a child, which would, of course, be legally proscribed in the country hosting a contest that she exhorts Wales “to ensure sustainable benefits from”.

She may be particularly interested in the fact that, earlier this year, under the headline ‘DOCTOR BECOMES ‘FIRST’ QATARI TO PUBLICLY COME OUT AS GAY’ The Independent reported that Nas Mohammed said: ““I walked into a gay club and I knew I was 100 per cent gay. I went home and cried – I thought my life is in crisis. I thought I was going to go to hell, my life is damned”. 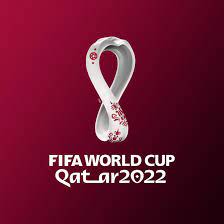 One leading Welsh football broadcaster, told us:  “A producer I work with is gay and he can’t go!”

Other issues about Qatar are also a source of concern. The country has been the subject of a warning from the UK Government to travellers going there, and it holds pariah status among many other nations.

The UK Government told potential travellers to the country they faced major risks, and it stated on its advice website:  “Terrorists are likely to try to carry out attacks in Qatar“.

Meanwhile, Saudi Arabia is one of several countries around the world which has cut off diplomatic relations with Qatar.

They also gave Qatari citizens 14 days to leave their territory and banned their own citizens from travelling to, or residing in, Qatar.

The other headline-grabbing issue has been Qatar’s relationhip with Iran, with which it shares the world’s largest gas field.

The state has also alarmed its neighbours with its connections to worrying extremist groups. Qatar acknowledges that it has provided assistance to some of them, such as the Muslim Brotherhood (MB), but denies aiding militant groups linked to al-Qaeda or so-called Islamic State (IS).

News that the state airline, Qatar Airways (QA) was coming to Cardiff Airport (CA) (the service has now been ‘postponed’), has raised eyebrows too.

The flight to Qatar’s capital Doha from CA was hugely-praised in the mainstream media (as with the qualification by Wales for the World Cup there), despite the fact that the troubled desert emirate had (even then) often hit the headlines.

The airport’s Chief Commercial Officer Spencer Birns stated baldly:  “Qatar Airways (QA) are committed to the route (with Doha) and we want them to be successful”. Mr Birns appeared to be optimistic, not simply about the link-up with a state airline, where the country rules homosexuality illegal, but the prospects for his airport generally, even though recent figures were less than encouraging.

He told a committee at the Welsh Parliament/Senedd Cymru (WP/SC): “There was more traffic handling at other airports than there was at Cardiff, but then don’t forget we’ve been in a position in Wales where, and quite rightly so, the government have been so heavily focused on the health of the nation, that actually encouraging people not to travel overseas has been a major factor in the Welsh government’s approach”.

Extraordinary statements like these came as figures showed that just 6,077 passengers had used his airport in one month during the pandemic, although this was viewed as a ‘success’ by CA (from which, presumably, many Welsh football fans might fly) as well, because it represented a big increase on the previous year.

They were also set against other remarkable comments. The Chairman of CA at the time, Roger Lewis described as “transformational” the association with an airline from a state with such a dubious record on civil liberties, and which has been accused, now, of offering enormous payments before being given the World Cup to host.

The flight to Qatar’s Hamed International Airport was described positively in the SWE as providing “capacity for 150,000 passengers a year, as well as significant freight capacity for Welsh exporters at around 10 tonnes a flight”.

When the first flight from Doha was due, WalesOnline just reported the glowing words of Mr Lewis when he said: “This is a pivotal moment for Cardiff Airport, for Wales and the South West of England. The far reaching consequences of this service for passengers and businesses will be transformational”.

The same praising phrase was used by the present Chief Executive of CA Deb Bowen Rees who told the SWE:  “The Qatar Airways service has been transformational…”

In interviews, the First Minister of Wales at the time, Carwyn Jones stated:  “We would like to work with his excellency (Akbar Al Baker the Chief Executive of QA)“. He tweeted that he “welcomed” the first QA flight into CA and said it represented a “huge boost” for Wales.

The then Welsh Secretary Alun Cairns informed us:  “The new flight from Cardiff to Doha (Qatar’s capital) plugs our entrepreneurs straight into one of the most dynamic economies in the Middle East, and an airport which offers a further 150 global destinations”.

As with qualifying for the World Cup, the mainstream media’s response to the announcement of the new Qatar route was remarkable, and became a target of our satirical writer Edwin Phillips. But disturbing headlines have long swirled around Qatar’s actvities.

Apart from the World Cup, Qatar hosted, too, the ousted ruler of Sudan, Omar al-Bashir, who was convicted of corruption in a Sudanese court, but seems unlikely to be extradited to stand trial for overseeing genocide in Darfur.

It also kept silent as hundreds of thousands of Algerians protested, chanting “the people want the regime to go”.

Hundreds of millions of dollars in ‘aid’ money has also been given by Qatar to Hamas, the group which holds sway in the Gaza Strip, and which has been designated by the USA as a terrorist organisation.

Wales is not alone, however, where concerns have been raised.

In England union activists have formed a coalition with groups such as Amnesty, Human Rights Watch and FairSquare, to submit a letter of protest to the Football Association (FA), about Qatar’s treatment of migrant workers used during the construction of football stadiums there.

Protests like these are unlikely, though, to worry a country which it is alleged put up hundreds of millions of pounds before getting a world football tournament, and where homosexuality has been ruled illegal.

But at least Wales has qualified!

The memories of our Editor, Welshman Phil Parry’s, astonishing 38 year award-winning career in journalism (including the real news behind sport headlines) as he was gripped by the rare neurological disabling condition, Hereditary Spastic Paraplegia (HSP), have been released in a major book ‘A GOOD STORY’. Order the book now!