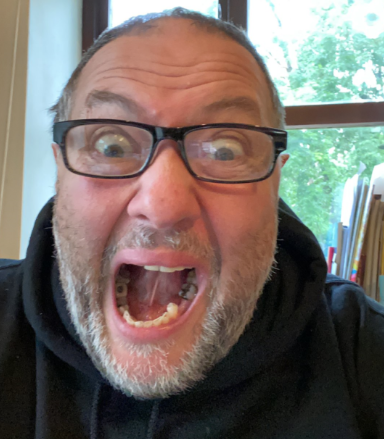 A former Welsh nationalist party candidate exclusively exposed by The Eye, who controversially claims he is starting a new ‘media’ service to which prominent public figures have pledged hundreds of pounds even though he has made sick ‘jokes’ about a murderous gunman and is under investigation by the police for alleged harassment, has threatened legal action.

Huw Marshall (a ‘digital consultant and strategist’) who has asked on social media for huge amounts of ‘crowdfunding’ money to start ‘New Media Wales’ (NMW) declares on Twitter “…the time will shortly come when lawyers get involved”.

The Eye’s research has confirmed there are ‘plans’ to run NMW with just four reporters, but there are severe doubts as to whether a ‘national media service’ can be delivered with such a small number, and there is no registration for NMW at Companies House.

Details about the new ‘media service’ have been given added weight after the announcement last week, of redundancies at the UK’s biggest newspaper owner, Reach, and is likely to raise hopes among journalists in Wales.

Reach owns Media Wales (MW) which is a big player in the Welsh media sector.

But half the staff working at MW have now been told their jobs are under threat, according to the National Union of Journalists (NUJ).

MW publishes the Western Mail, South Wales Echo and the website WalesOnline, and more than 70 workers there could lose their jobs.

But grabbing the headlines has been common for Mr Marshall, and he uses the internet a great deal in pursuit of his political aims – not always wisely.

In 1992 he stood as Plaid Cymru’s (PC) Parliamentary candidate in Cardiff Central, coming fourth with just 748 votes, however his plans to stand for election as a councillor were scuppered when it emerged that he had posted so-called ‘jokes’ about rampaging gunman Raoul Moat on Facebook (FB) and made abusive references to politicians on Twitter.

In the online launch ‘manifesto’ for NMW, Mr Marshall wrote: “We will be politically neutral, we have to be, our aim will be to deliver scrutiny and clarity around the policies being proposed by the various political parties in Wales in the run up to the Welsh general election being contested in May 2021″.

His ‘plans’ for the ‘unbiased’ Welsh news service have also featured in HoldtheFrontPage.Co.UK – a website for UK journalists.

In a disturbing disclosure, the website also stated:  “So far a crowdfunding initiative has seen 48 patrons pledge a total of £333 per month to the project”.

Our investigations reveal that a few weeks ago Mr Marshall had in fact a total of 179 patrons pledging £1,221 per month, but he has said he needed a lot more – 500 to launch.

In a recent tweet he vowed that he could save a huge amount of money for Wales’ biggest broadcaster BBC Cymru Wales (BBC CW), but others have stated that he is a ‘bully’.

Also on the internet, Mr Marshall has stressed consistently that NMW will be ‘politically neutral’, despite the fact that he has been a PC candidate, and he repeats it in the website piece.

He said at one point the service was “recruiting an editorial board, with representation from across Wales, politically and culturally, that will monitor our output and ensure neutrality”.

He also announced:  “Our service will hold ALL political parties in Wales to account”.

It remains to be seen whether the Welsh nationalist party for which he stood as a candidate, will be one of the parties ‘held to account’ and they are words which may ring hollow to many of those who have pledged to give Mr Marshall huge amounts of money after we have revealed his background.

Mr Marshall’s candidature for PC at a General Election came before his plans to stand as a councillor had to be abandoned when it emerged that he had made public ‘jokes’ while the gunman Moat was on the run.

“My Mr Right should be a big strong ginger man with a fiery temper and a jealous nature, who also enjoys camping and writing long letters.”

In 2013, it also emerged that Mr Marshall had made extremely offensive remarks to senior politicians, once again on social media.

One insult was directed at the Labour MS and minister Ken Skates with another hurled at the former Liberal Democrat AM Peter Black.

Meanwhile he is evidently unhappy with the conduct of officers during their alleged harassment inquiry of him, and on Twitter told South Wales Police that he intended to make a complaint.

Mr Marshall also has no problem in taking an extremely high profile political stance in relation to support for the Welsh language (which many would not agree with) despite claims of being “politically neutral”.

In December 2018 he began an online petition calling for an ‘independent review’ of BBC content, after an episode of Newsnight the previous August contained a debate which asked the question “Is the Welsh Language a help or a hindrance”.

An online post he published was headlined tendentiously: “Does The BBC have a problem with Welsh?”.

He said: “My concern at the time, along with many others, was the perceived institutional issue the BBC had with the Welsh language. In order to address this I started and (sic) online petition”.

Perhaps others now might start a petition too – about why they have pledged money to a man who made ‘jokes’ about a murderer while he was still on the run, called leading politicians ‘t**ts’, stood as a PC candidate even though he said his service would be “politically neutral”, and now says that lawyers will  “get involved”.

Tomorrow – the reply that COULD have been made from a sport governing body in Wales, to a complaint from a football fan that “extremist Welsh nationalist groups (are) ‘tagging on’ to the Wales national football team on social media”.

The memories of our Editor Phil Parry’s astonishing 36-year award-winning career in journalism before the advent of a ‘new media service’ in Wales, as he was gripped by the rare disabling condition Hereditary Spastic Paraplegia (HSP), have been released in a major book ‘A GOOD STORY’. Order the book now!