Our columnist The Commentator looks at the reality of whether Wales could be an independent nation in a world geography which is increasingly international, as the idea gains ground.

Welsh independence has the same genealogy as Brexit.

It’s the emotional argument that it would be better to live in a cave and be free, than be prosperous under the rule of another country.

If a referendum question on Welsh independence was along the lines of : “Do you want to decrease your wealth by a third, yet live in Wales as an independent nation?” The answer would be a resounding ‘no’.

Yet we are told that ‘record’ numbers support independence for Wales and a major political party appears to be edging towards it.

The leader of the Welsh nationalist party Plaid Cymru (PC) Adam Price has proclaimed “I think we need to have that conversation (on independence) and we need to decide on that at some point during this decade” in an article in the South Wales Echo, along with a picture of him that was headlined ‘Independence would let Wales be equal nation”.

The results of a survey in the summer were ‘reported’ that almost a third of voters would vote ‘yes’ in a referendum on independence for Wales.

At 32 per cent this was the highest figure ever recorded by the polling company YouGov.

But that still leaves a massive 68 per cent who are opposed, and this figure is likely to increase during a referendum campaign, when the reality of Welsh independence would hit home.

I’m not against independence in principle, but it would have to pass four tests:

1. The concept needs to demonstrate beyond reasonable doubt that it would make Wales more democratic and less open to rule by elites.
2. We must be convinced that the population would become economically and socially wealthier.
3. It must be proven that it would make Wales healthier.
4. We need to be sure that the majority of Welsh people want it.

Other important questions have yet to be satisfactorily answered by supporters of independence too.

A recent ‘news’ piece on the nationalist website Nation.Cymru (NC) was headlined that ‘thousands’ had signed a petition calling for an independence referendum, but the text revealed the actual number was only 2,000.

Polls have not been good news for the website as the results have had to be ‘spun’. A St David’s Day poll giving the figure of 11 per cent of people in Wales supporting independence, was ‘reported’ in NC as a rise because it represented a four per cent increase on last year.

NC is funded to a large extent by public money through the Books Council of Wales (BCW) and the Editor Ifan Morgan Jones is a lecturer in journalism at Bangor University (BU), yet it is surely a fundamental tenet of journalism to be neutral and this seems to be lacking in his website.

According to another recent survey it seems that support for SCOTTISH independence may have reached a high level, but the same cannot be said for Wales and this represents a significant problem for those seeking the same here.

Even in Scotland, though, there are major issues because senior figures in the Scottish National Party (SNP) were briefed before the 2016 Scottish parliamentary election that CONSISTENT polling of about 60 per cent in favour of independence would indisputably prove that the country had changed its mind since the 2014 referendum.

Perhaps the most important one is the economy.

Backers of small independent countries like to point to Iceland, but this country has a huge and thriving fishing industry which Wales doesn’t have – there isn’t even a coal industry in Wales to speak of now that all the deep mines have closed.

The Welsh economy is one of the weakest of the UK regions, and to a large extent still relies on UK Government support even after 21 years of devolution.

The Welsh Government has stated:  “Over a quarter of the workforce in Wales work for the public sector. There is a significant public sector presence in Wales on a local, national and UK-wide level”.

But there are other huge difficulties as well. 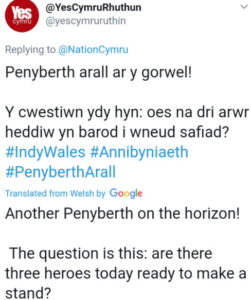 Supporters of independence for Wales also have not helped their cause by publicly posting extreme views on social media.

A branch of the main Welsh independence organisation Yes Cymru (YC)  celebrated a potential attack on a UK military base on the Llyn Peninsula and asked on Twitter whether “heroes” would make a stand in conducting it, while another group from YC said people in “our country” (Wales) refuse to integrate, posing the question menacingly of what should be ‘done’ about Unionists, and a YC supporter who claims he invented their app said on Twitter that gay people should be prevented from spreading disease.

The extraordinary ‘anti-Unionist’ tweet was put out by YC in the Afan Valley and declared:  “These people are in our country, yet refuse to integrate into our local community”.

The provocative ‘attack’ one on Twitter came from YC in Ruthin and referred to a notorious incident in 1936, when an RAF bombing school was set ablaze at Penyberth on the Llyn peninsula, and founding members of PC were jailed.

The event has gone down in folklore for Welsh nationalists and a video on YouTube announces:  “Penyberth.  Plaid Cymru one.  RAF nil.”

This inflammatory tweet in Welsh and English said:  “Another Penyberth on the horizon! The question is this:  Are there three heroes today ready to make a stand?”.

This contentious Twitter remark was a response to an article ‘reporting’ protests against a new military training base on NC.

This sort of talk, though, might turn off the undecided voters in Wales, who could be tempted by the thought of independence, and that may create yet another barrier.

It is obvious that there are a lot of them…

The Eye - 26th November 2021
%d bloggers like this:
We use cookies to ensure that we give you the best experience on our website. If you continue to use this site we will assume that you are happy with it.OKNORead more