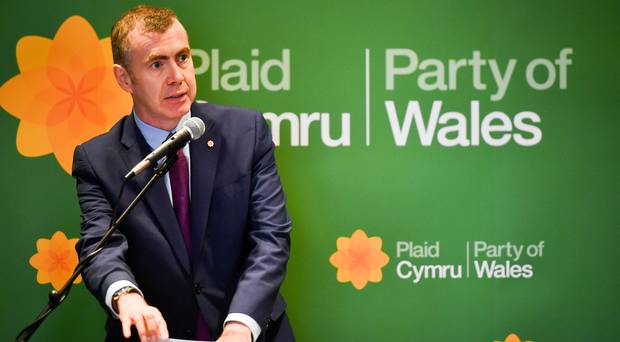 Edwin Phillips reads an invitation for a drinks reception at a party’s Cardiff headquarters to the mainstream media in Wales in order to meet Adam Price, the new leader of the prominent Welsh nationalist group, Plaid Cymru.

You are formally invited to a reception to meet our new dear leader Adam Price.

This invitation is only extended to journalists in the Welsh mainstream media and not to those working on that trouble-making website The Eye.

They have published critical pieces about Mr Price’s perfectly sensible suggestion of changing the name of Plaid Cymru to the ‘New Wales Party’.

Indeed not being old is very important to Mr Price.

He told the conference of our fellow nationalists, the Scottish Nationalist Party (SNP):  “The old Britain is dying. Let it die”.

The fact that the title ‘New Wales Party’ may have extreme right wing connotations in the minds of voters is neither here nor there.

It is a complete coincidence that the name is very similar to the ‘New Party’ which was created by Sir Oswald Mosley.

The mainstream media in Wales have quite correctly ignored the minor point that in 1931 Sir Oswald resigned from the Labour Party to set up his own ‘New Party’ the following day.

Mr Price has rightly not been pressed on this issue at all by the likes of WalesOnline, Western Mail, South Wales Echo or BBC Wales.

We understand that election front runners in other Welsh parties have also not been asked awkward questions by the mainstream media.

It appears only that disreputable website The Eye is doing so.

Clearly Mr Price’s pronouncements are popular because more than 2,000 people have become members of Plaid Cymru since he became leader and said:  “Together we are going to work to win a ‘New Wales’ (there are those words again)“.

The ‘New Party’ may in fact provide an example of how to win more votes for a ‘New Wales’.

After all, a candidate for Sir Oswald’s party stood against Labour in the 1931 General Election in Merthyr Tydfil where he (and it) attracted 10,834 votes, as well as securing a sizeable share at 30.6 per cent.

The New Party also had an in-house magazine like us, although it was called ‘Action’.

These party publications are extremely useful for articles stressing ‘personal’ views, as our former Chief Executive Rhuanedd Richards has shown.

Ms Richards has now been named as the new Editor of BBC Radio Cymru. and that irritating website The Eye picked up on it.

Yet she had put it so eloquently when she wrote in our party newspaper: “Who was it that said the greatest gift you can give another is the purity of your attention?”.

The Welsh mainstream media have justifiably ignored the fact that Sir Oswald’s New Party became increasingly authoritarian before it was subsumed into the British Union of Fascists in 1932.

Only the name of Mr Price’s proposed ‘New Wales Party’ is similar and the mainstream media in Wales have been right to disregard it.

But as everyone knows it is perfectly accurate to say we should hold as an example ‘outsider movements’ as our dear leader has put it.

You in the Welsh mainstream media will hear how Mr Price believes Plaid Cymru (or as he wanted to call it the New Wales Party) needed to learn from “popular outsider movements” ranging from Labour under Jeremy Corbyn to Donald Trump’s election as US President, in order to capture the imagination of people outside the party’s core support of “Welsh-identifying, left-of-centre voters”.

You may also hear unfortunate criticism of the plan from our own supporters.

Especially if he calls our new party newspaper ‘Action’.

But we should all think different, or differently.

Tomorrow – the controversy behind the defection to Plaid Cymru (or the ‘New Wales Party’) of the leader of the Greens in Wales.

Later this week – the winner of The Eye picture caption competition where a leading member of Plaid Cymru publishes a photograph of himself with his fists thrust towards Adam Price.

You can still enter!

Also on The Eye the bizarre decision by BBC Wales to scrap a TV Current Affairs series which won an award last night.