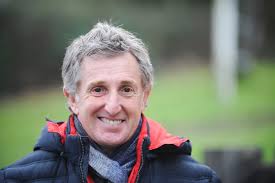 A storm of controversy has been provoked following revelations that a social media account for a BBC Radio Wales programme about the Rugby World Cup today displays barely any re-tweets, and most were either connected with the programme, the presenter himself or his colleague on another chat show.

Three of the re-tweets were from Jonathan Davies, his broadcasting colleague Nigel Owens (a former Rugby World Cup referee, and one of the co-hosts of the TV chat show Jonathan with Mr Davies), and Colin Paterson (the Editor of BBC Radio Wales {BBC RW}).

Mr Owens’ TV co-host, Mr Davies, has caused publicity in other ways than by re-tweeting news about his programme, although social media has played a central role. Recently he engaged in an extraordinary spat on Twitter in which he branded a critic an “attention seeking nobody”, a “sad pathetic waste of time” and ‘hashtagged’ the words “absolute bell end”.

His fury was directed at journalist Marcus Stead who had criticised what he views as the Welsh establishment. A Welsh newspaper columnist and broadcaster who saw the tweets said it was a “badge of Welsh honour” to be blocked by Mr Stead, although he has never blocked Mr Davies.

But it seems Mr Stead has support on Twitter, and the commentary style of Mr Davies has been condemned.

One said in a tweet that Mr Davies was “tedious”, that he should be removed from The BBC rugby league team and that he “ruins” the game. Another pleaded that Mr Davies should “shut up”.

A further supporter of Mr Stead’s told us:  “I find it amazing that Jonathan Davies can stoop to this schoolyard type of internet argument. It appears he (Mr Davies) does not take criticism lightly. If I was in his position I would never respond to baiting.”

Mr Davies has not always been popular with rugby fans and earlier this year made headlines in a UK newspaper when his commentary style was publicly criticised.

The Daily Express reported:  “When they (France) scored (a) try, Wales hero Davies erupted on the BBC’s commentary, much to the frustration of fans at home. One fan wrote on Twitter: ‘Jonathan Davies for once can you please contain yourself during a Welsh game?

“‘When you’re commentating for the BBC you’re being paid to commentate not to be a fan….. I know it’s very hard for you to do your job professionally but please try. #6nations2019’.

“Another added: ‘When oh when will the BBC retire Jonathan Davies?!?! I’m sick to death of his whiney “Wales are brilliant”, everyone else are lucky commentary’. ‘So the secret to watching rugby on the BBC is to mute the sound and listen to 5Live on your DAB radio, no Jonathan Davies! #6nations2019′, another added.

“Another wrote: ‘Good to see Jonathan Davies has got on top of his beyond biased commentary….. #SixNations2019.’”

But Mr Paterson too has made headlines for all the wrong reasons. He was forced to apologise after making false claims about how listeners were offered a unique programme in his contentious schedule changes.

Mr Paterson said the presenter Claire Summers “will be the only female journalist anywhere in the UK to take on the role of solo presenter for a national breakfast news programme”.

But the extraordinary statement immediately drew a response from Julia Hartley-Brewer of Talk Radio who tweeted ironically: “I guess I’m just the wrong kind of woman”. Other shocked radio listeners also pointed out Mr Paterson’s mistake and he then said:  “Amended now, quite right. Apologised to Julia.”.

Commentators have noted the particular skills of Ms Summers, and it has been recorded: “In 2005 … Summers had to lead a Welsh Black cow called Ceridwen at the Royal Welsh Show”.

Lee Waters, the AM for Llanelli tweeted to BBC Wales (BBCW): “Really concerned about this – absolutely nothing against Claire, but plenty against magazine format. We need agenda-setting news & scrutiny in this slot. You’re a national public service broadcaster. Where else are we going to get it?”.

The chair of the Welsh Council of the National Union of Journalists (NUJ) Nick Powell said: “The union is concerned at the reduction in news oriented output on week days, amounting to five hours per week, and senior managers have yet to fully explain how they see changes in the long-established format of the breakfast and drive-time programmes will improve news content. Good journalism has never been more vital than it is right now to the people of Wales”.

The Director of BBCW Rhodri Talfan Davies was forced to defend the controversial changes to Welsh Assembly Members yesterday.  He insisted to the Culture, Welsh Language and Communications Committee that “no significant stories” had been lost since the new format was introduced.

But the media in Wales have reported growing unease at the changes enacted under Mr Paterson’s leadership of BBC RW. WalesOnline said:  “BBC Radio Wales has come under fire after a major shake-up which will see it slash weekday radio news coverage by at least five hours a week”. It also reported:  “As well as reducing its daily drive-time news by an hour from Monday to Friday, its regular breakfast show is set to make way for what has been described as a ‘magazine-style’ show”.

The sweeping changes also meant four female presenters were taken off the airwaves on news programmes. Regular daytime presenters, such as the popular Mal Pope with a long association to BBC RW, were axed.

Mr Paterson had described the new line up as a “creative challenge” and the figures last Autumn made the challenge clear, revealing that BBC RW had an average weekly audience of just 317,000 listeners between July and September.

The weekly audience ‘reach’ for RW, stands in stark contrast to what he had proclaimed he could achieve. For the station’s 40th birthday commemorations last year, Mr Paterson had told media executives it would be approaching 500,000. But at the birthday ‘celebrations’, he did not directly address the falling listening figures and huge undershoot, saying instead:  “Radio stations tend to be looking more towards narrow-casting…”.

Earlier last year when other low listening figures were about to be released for BBC RW, Mr Paterson commented in an email we have seen:  “I couldn’t be more pleased…”, and in response to a decision to axe BBC RW coverage of the football club Wrexham FC, Mr Paterson told a fan to listen online.

On average a mere 2,750 people out of the 3,000,000 population of Wales are listening per hour, giving the station a tiny 4.4 per cent share of the Welsh market, yet it still claims it is the “national radio station for Wales”. The cost works out at about £6,500 per listener per annum.

A former day time programme presenter, who has been described on Wikipedia as one of the main presenters on BBC RW at the beginning, Mike Flynn told us:  “Paterson has not responded to my demands to resign or indeed had the decency to discuss where this strategy is leading. He is a public servant not some cavalier local businessman running a chip shop. £18 million in the kitty and the listeners are deserting in droves.

“I really believe Rhodri Talfan Davies needs to consider his position as well.”