A convicted South Wales conman we have exposed who had his legs broken when a drugs deal soured and is under investigation by the police after an alleged assault has asked for money from the public for a charity but the funds go straight to him even though he has been jailed for fraud, The Eye can exclusively reveal.

Criminal ‘Estate Agent’ Howard Williams (who changed his name to) James Daniels and moved to Spain, has just posted on his restaurant website there, Blanco, that he is supporting a charity because of World Mental Health Day.

Yet the donations are to go to his own Paypal account on the charity’s advice but are meant to be transferred into its own savings account at the end.

The charity also offers links to a number of reputable fundraising platforms such as ‘JustGiving’, none of which Williams/Daniels is using.

The charity clearly states on its website:  “Here’s a round-up of a range of the low cost or no cost online giving platforms available, what they offer, their costs, and how they manage to keep their expenses low, or non-existent”.

The police may be asked to look into this matter if the full transfer of funds does not take place afterwards, because legal issues have rarely been far from the life of Williams/Daniels. A ‘denuncia’ or statement has been given to the Guardia Civil alleging that Williams/Daniels smashed the window of a home then grabbed and assaulted a pensioner.

It has been claimed that after smashing the window he tried to kick in the door of the villa and then ‘went for’ the pensioner in his 70s. The alleged drama happened this Summer and the claimant, his present wife Lisa, is expecting formal action soon from the Guardia Civil. The elderly man is Lisa’s father and he had to be taken to hospital with bruising to his ribs and chest as well as a sore groin, after being kneed during the incident.

Williams/Daniels has also just announced his engagement to Danni (or Danielle) Greer despite the fact that he is still legally married.

She works in Glasgow where another new restaurant/wine bar of his apart from Blanco is to be located. As well as the request for donations to him on Blanco’s website in Murcia, the announcement of his engagement was also made here. Ms Greer works for Digby Brown solicitors in Glasgow as a ‘Welfare Rights Advisor’ specialising in serious injury.

He had himself called the proceedings he is involved in with his wife, a “messy divorce” in a Facebook post which has now been deleted.

The disturbing news comes hard on the heels of other alarming facts about Williams/Howard that we have also been alone in reporting. After moving to Spain from Wales, he fleeced many innocent people of thousands of pounds. In the Facebook post which has been deleted, he claimed:  “… when I was younger I did spend a short while in prison for fraud in the UK”.

In fact our journalists have shown that over 10 years his jail sentences have totalled four years four months, involved 25 counts of deception, and he has been made bankrupt three times. His own father Bill Williams has described Williams/Daniels to us as a “complete crook”. Williams Snr who ran a sofa business in South Wales, believes his son stole about £250,000 from him in cash and stock, and posted on Facebook that he and his wife knew of their son’s past and on occasions did not like him, although always loved him.

He said:  “… we know his wrongs often we felt he was a little xxxxx but whatever we allways (sic) love him, often we did,nt like him but we always have and always will love him…”. Unusually there was no positive comment after this from his son.

There were also a mysterious burglary and fire at his parents South Wales home and the dates are intriguing. Williams/Daniels was convicted at Cardiff Magistrates Court of five counts of deception on December 22 2005 and sentenced to four months imprisonment. On November 21 2006 his parents home was burgled.

On July 27 2012, Williams/Daniels was convicted of eight counts of fraud and asked for another 11 counts to be taken into consideration. He was sentenced to two years on another matter and two years for 19 counts, to run consecutively, so four years in total. He appealed the total sentence in 2013 but this was dismissed in early 2014 – so his release date for those crimes would have been no earlier than April 27 2014. Williams/Daniels was working in his parents South Wales business in the months before the fire occurred, and posted photographs of it on the firm’s Facebook page.

This is the truth, but Williams/Daniels has accused us of ‘lying’ when he has abused us. The Editor of The Eye Phil Parry as well as his friends, wife and children, have been subjected to a torrent of insults on social media from Williams/Daniels and his supporters, following our discoveries.

Apart from formerly dealing in drugs when he needed hospital treatment after his legs were smashed following the badly-executed deal, some of Williams’/Daniels’ victims have been left mentally damaged by losing large amounts of money to him. But as with our other revelations there is mounting consternation that the details have not been covered by the mainstream media in Wales.

In his previous ‘career’ as an ‘Estate Agent’, the anger of an individual on one property website is clear:  “He (Williams/Daniels) makes you pay circa £10k deposit and then disappears into the sunset”.  At a property event in Southern England The Eye were told that an investor had lost £30,000 to him.

His extraordinary exploits have even been the subject of our satirical writer Edwin Phillips and Williams/Daniels has boasted of owning a boat as well as a jetski, which he has said on Facebook was for sale. He has posted a Youtube interview on his property website where he brags about his property ‘expertise’. He claims he had a “massive” estate agency business, but went from earning £20,000 a week to having just £56 in his pocket and living on the streets. Williams/Daniels also alleges he has driven expensive cars, and said in the interview that it took just  “24 hours” to turn the £56 into £1,000, yet some critics have questioned how much of this is true. One who is owed thousands of pounds by Williams/Daniels told The Eye:  “This is all made up.  He lives in a complete fantasy world!”.

Williams/Daniels also ran dance nights at a disco in Spain called ‘Roldan’ but it closed soon after our disclosures.

In addition to having his legs broken when an illegal drugs deal soured, we have also disclosed how formerly Williams/Daniels has teamed up with another ex-criminal from South Wales, who had been put behind bars for drug offences, to start a ‘charity’.  He launched the ‘Crisis Housing Charity’ and asked for donations from the public in a venture designed ostensibly to help ex-convicts find homes.  The ‘charity’ gave an address in Cardiff but does not now exist.

His ex-business partner, Sam McManus (also known as ‘Georgeson’), has first-hand knowledge of his lies and criminal past. He has admitted he too was conned by him and that he was a ‘sick man’. Mr McManus explained to us how he was deceived along with everyone else, and told The Eye:  “He (Williams/Daniels) has fooled many people and I can only be grateful that there are good investigative journalists like you guys who expose greedy people like him. It is embarrassing to admit that I am yet another victim of his greed”.

On a Facebook website alerting people to crime in one area of Spain, a disturbing post was recently published about Williams/Daniels. It said:  “James Daniels of Blanco restaurant owes his landlady who is chronically ill with cancer €3,000 in unpaid rent and bills … what a conman (who) blatantly drives around in expensive cars.  This poorly lady needs an income to live, not the stress caused by this unscrupulous person … Disgusting behaviour”.

Despite being sentenced to years in prison, Williams/Daniels  appears to go from strength to strength. He has formally declared: “BLANCO, PART OF THE NICHE GROUP OFFERS FANTASTIC CUISINE, WINE AND COCKTAILS FOR A BROAD PALETTE. THE VISION OF THE FOUNDER, JAMES DANIELS WAS TO DELIVER QUALITY, PRICE AND SERVICE TO ALL.  THIS IS THANKS TO THE AMAZING TEAM BEHIND BLANCO… “.

But Blanco has not been without its problems. Our journalists have divulged how over a Christmas and New Year he had warned customers on social media that they could no longer accept credit cards at Blanco even though these are the busiest times of the year.

It seems it is also a busy time for Williams/Daniels, if he is now asking for donations from an unsuspecting public to go straight to him even though he has been convicted of fraud.

Soon – more alarming revelations about the exploits of Williams/Daniels.

Tomorrow – further disturbing disclosures about extremist Welsh independence party after we exclusively exposed links between founder and leader of a paramilitary organisation.

Our Editor Mr Parry’s memories of his extraordinary 36-year award-winning career in journalism as he was gripped by the incurable disabling condition Hereditary Spastic Paraplegia (HSP), have been released in a major new book ‘A Good Story’. Order the book now. The picture doubles as a cut-and-paste poster! 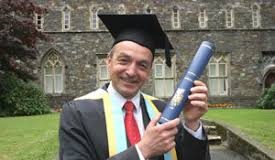 The Eye - 21st January 2020
%d bloggers like this:
We use cookies to ensure that we give you the best experience on our website. If you continue to use this site we will assume that you are happy with it.OKNORead more