Home News Up, up and away… 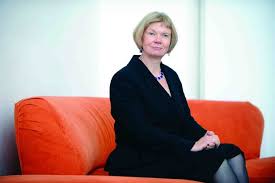 After a controversial period in charge of a Welsh university which careered down league tables and opened a disastrous campus on a tropical island which was forced to close because so few students had enrolled, a contentious executive has landed another senior role at a major higher education institution, it has emerged.

The extraordinary move shows how we have been offered yet another remarkable example of the way certain people in public life appear to glide effortlessly from one senior job to another leaving a trail of controversies in their wake.

The latest magazine for former Manchester University (MU) students proclaims that April McMahon is “the new Vice-President for Teaching Learning and Students”.

Yet in one of her previous incarnations Professor McMahon presided over a catastrophic period as Vice-Chancellor (VC) of Aberystwyth University (AU) when the institution tumbled down the rankings, and she was forced to warn that the tables should be “taken with a pinch of salt”.

The disturbing news also comes hard on the heels of recent astonishing information about the career of Roger Lewis.

He is taking up a position as president of the National Museum of Wales/Amgueddfa Cymru, even though his time as Chairman of Cardiff Airport (CA) was marked by an alarming link up with a middle eastern state accused of supporting terrorism, a former employee at another of his work places told us how his tenure at the helm had seen the closure of whole departments, and during a tumultuous period in charge of the Welsh Rugby Union (WRU) his organisation engaged in a fierce row with the regions, which he lost.

Yet despite the chequered history of Mr Lewis, on his appointment the Welsh Deputy Minister for Culture Sport and Tourism, Lord Dafydd Elis-Thomas, said: “I’m delighted with Roger’s appointment as the new president for Amgueddfa Cymru”.

Professor McMahon too has been applauded by her peers despite the recent past.

She finally left AU in the summer of 2016 after The Eye disclosed she was considering her position.

We showed how she had been forced to work alongside the university President Emyr Jones-Parry, before she finally left, which caused huge disquiet among senior university staff.

The Eye also revealed how during her calamitous five-year tenure, AU had plummeted in The Guardian league table, which is widely-read by potential students, and fell sharply in the Complete University Guide (CUG).

The most recent Sunday Times Good University Guide 2020 showed how after Professor McMahon left, AU had done slightly better but following its appalling performance when she was VC this is hardly surprising.

Before that in the guide it had dropped 11 places to 93.

A damaging profile of the university at the time she was in charge stated: “Aberystwyth has set itself the goal of becoming one of the top 30 universities in the UK and the top 250 in the world by 2017.

It is also likely that the then dramatic drop in the rankings for AU contributed to other problems, and in particular dissuaded potential students from going there.

The former director of finance, Peter Curran, had said: “The financial implications of under-recruitment have never been so significant”

It was also during her unbelievable tenure that a headline-grabbing campus on the sun-drenched holiday island of Mauritius was opened, but officials had to announce its closure soon afterwards because only 106 students had enrolled in its second year.

Yet the writing had been on the wall for AU’s Mauritius campus long before this, after it lost the institution over £1 million in a little more than two years, and Professor McMahon should have been aware of the problems.

Set against a backdrop of a massive cost-cutting exercise because of “huge financial pressures”, accounts show that the Mauritius failure chalked up losses of £1,017,587 between 2015 and 2017.

But they also reveal the dismal record of the campus itself.

In 2015/16 the campus brought in just £173,000 worth of tuition fees – of which the university received only £40,887 due to its partnership with Boston Campus Limited on the failed project.

The Mauritius ‘Branch Campus’ of AU had been condemned to us by staff as an “expensive folly” and a former VC said opening it had been “madness”, but it advertised for people even after its shutdown had hit the news.

Despite all of this, top-level executives flew to the holiday island for a second ‘graduation’ ceremony this summer, which does not appear to be terribly good media-management in the circumstances.

Notwithstanding controversies like these, MU proudly proclaims that Professor McMahon has been “associated with the University of Manchester for over 40 years (and) was previously Associate Vice-President for Risk, Compliance and Research Integrity”.

Mr Lewis too is no stranger to bad headlines and when he was in charge at Cardiff Airport (CA) a contentious association was announced with the troubled Middle Eastern emirate of Qatar.

A link up with the state-owned Qatar Airways (QA), came under the spotlight following the UK Government’s warning that potential travellers to the country faced major risks, and it stated on its advice website:  “Terrorists are likely to try to carry out attacks in Qatar“.

Hundreds of millions of dollars in ‘aid’ money had been given by Qatar to Hamas, the group which holds sway in the Gaza Strip, and which has been designated by the USA as a terrorist organisation.

Yet Mr Lewis had described the connection with QA as “transformational”.

The row which Mr Lewis lost between the Welsh Rugby Union (WRU) and the rugby regions in his time there was ‘transformational’ too.

In November 2012 he told The Independent:  “We are where we are largely through past managerial incompetence at regional level. I’ve kept my counsel until now. Why?”.

When he was in charge of ITV Cymru Wales Mr Lewis also provoked enormous anger – this time among some of his staff.

One former employee told us:  “He presided over the piecemeal dismantlement of ITV Wales, with facilities and departments disappearing one after another, a process which would eventually lead to the closure of the Culverhouse Cross (CX) site.

“I remember there was much ‘management speak’ about the need to move to a facility that was fit for purpose ‘going forward’”.

Mr Lewis clearly ‘goes forward’ and told his alma mater Nottingham University:  “You re-plan, you re-think and you re-dream that you can and you will”.

He has commented on television in the past:  “I know my success is staggering to many”.

Part of that ‘staggering success’ may be that he has also threatened to place a legal injunction on The Eye to stop a previous article about him being published.