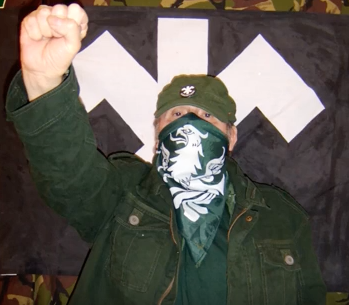 An extreme nationalist Welsh independence group created by the supporter of a paramilitary organisation which had links to the IRA, has been forced to reinvent itself following our revelations about its past, and that a senior official who ives in England is barred from voting for his own party in Wales, The Eye can exclusively reveal.

The contentious faction Ein Gwlad (Our Country/Land) EG has just announced it is to be now known as Gwlad Gwlad (Country Country/Land Land) GG, and the controversial Chair of the party Gwilym ab Ioan (whose nickname is Gwilym the Gardener) is standing down.

It says on social media:  “A more consensual approach will… pay dividends for us”.

And:  “We want to stand shoulder to shoulder with the independence movement as a whole”.

It comes soon after we had shown that Stephen Morris, ‘General Party Spokesman’ and ‘Policy Researcher’ of EG, actually lives in England so is unable to vote for the party in Welsh elections.

In a piece introducing it on the Nation.Cymru website, Dr Morris wrote: “Wales is a unique country. There is nowhere quite like it.” But Dr Morris works in Wrexham yet lives across the English border in Shropshire.

Meanwhile next week we will disclose further alarming facts about the former Chair Mr ab Ioan which may have contributed to his ‘standing down’.

But this is not the first time we have exclusively divulged worrying details about senior officials with EG/GG. It was originally founded by a far right pensioner named Royston Jones, who now may have been eased out of the group.

He writes an acerbic blog called Jac o’ the North, which proclaims it is: “Interpreting Wales from a Right of Centre Nationalist perspective”.

He has published on his blog a picture of Cayo Evans, the leader of the 1960s paramilitary organisation, Free Wales Army (FWA), pointing a hand gun at the camera, and he revels in his long-standing support for the organisation. Mr Jones has also praised Evans as a “friend” and “comrade”.

Evans was the leader of the FWA which came to prominence more than 50 years ago, and it has been reported that the Official IRA (OIRA) gave or sold, most of its weapons to the organisation as part of its turn away from political violence. Despite this, Dr Morris has described the party’s founder as “venerable”.

The disturbing news about both of them comes hard on the heels of other unnerving issues concerning EG/GG highlighted exclusively by The Eye.

Reporters say they have been unable to contact the party and campaigning before a possible UK General Election has been invisible. One journalist told us:  “It is incredibly difficult to get hold of Ein Gwlad (as it then was) for a comment. Nobody seems to know who to contact”. The EG/GG website was still active until recently and stated: “FOR NEWS, REVIEWS & OPINI0N ON THE POLITICAL FRONT IN CYMRU (WALES)”, but other engagement is minimal.

Yet this is not the first time EG/GG has been engulfed by problems.

Following our revelations about Mr Jones’ connection with Evans, and news on The Eye of his publication of him with a pistol, a hotel where he was to announce the formation of the group, sent a message to him saying:  “With regards to … concerns, we have now cancelled your meeting room with full refund of payment”.

It seems now they have put a new label on his bathtub.
But calling it Gwlad Gwlad (GG) cannot disguise the fact that it was founded by a man with links to a paramilitary group, who posted a picture of its leader holding a gun on his blog.