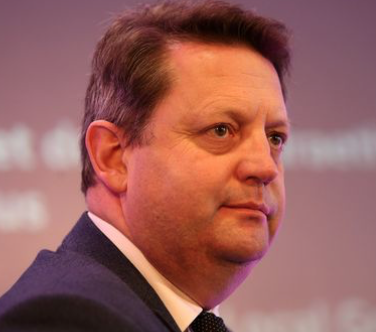 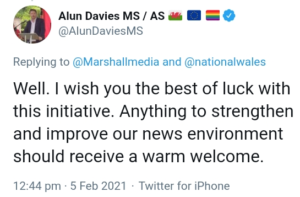 Yet another prominent politician in Wales has today endorsed a highly-questionable ‘national news service’ to be run with just two reporters, despite the fact that the ‘comedian’ behind it made sick ‘jokes’ about a murdering gunman, used bad language to abuse publicly other senior politicians, was investigated by the police, and has been reprimanded by a social media company, The Eye can reveal.

This time it is the controversial Welsh Parliament/Senedd Cymru (WP/SC) member for Blaenau Gwent, Alun Davies, MS who has proclaimed in a tweet that he wishes ‘best of luck’ to the ‘comedian’ at the centre of it all, Huw Marshall.

Mr Davies declared on Twitter about Mr Marshall’s ‘national news service’: “Well.  I wish you best of luck with this initiative. Anything to strengthen our news environment should receive a warm welcome”.

But it seems unlikely that there will be a ‘warm welcome’ for Mr Marshall’s past behaviour.

It was divulged that on social media he had made extremely offensive remarks to two major political figures in 2013, and complaints after further comments led to the reprimand from Twitter.

One of the insults seven years ago, was directed at the Labour MS and minister Ken Skates, with another hurled at the former Liberal Democrat AM Peter Black. After Mr Skates tweeted in celebration of a one-vote council by-election victory over Welsh nationalist party Plaid Cymru (PC) in Ruabon, Mr Marshall referred to him in his own tweet as a “gloating t**t”. Mr Marshall also described Mr Black as a “humourless t..t”and a “dull, tedious t..t”. 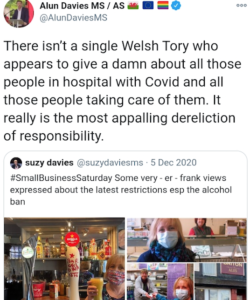 Mr Marshall’s use of social media has always been intense, and it appears Mr Davies is an admiring follower of his on Twitter, because apart from today’s remark he has ‘liked’ one of his tweeis which is now padlocked.

The disturbing revelations recently that three senior Welsh politicians and a party chief of staff may have breached coronavirus/Covid-19 rules, threw the spotlight on the tweets of one of them, Mr Davies, when he condemned people voting against the regulations, saying they “don’t give a damn about the health and well-being of our people”. 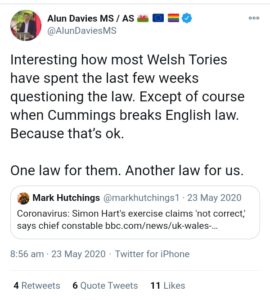 He along with the others, are understood to have consumed wine during a meeting in the ‘tea room’ area of the Ty Hywel building, which is attached to the WP/SC in Cardiff, following a full plenary meeting on December 8 – four days after drinking alcohol in hospitality venues was banned in Wales, and the Senedd Commission investigated.

But on Twitter over the last few months, Mr Davies appears to have taken a rather different position.

In one he slammed The Brexit Party for opposing coronavirus regulations, and in another after the scandal over Dominic Cummings visiting Barnard Castle, he said:  “One law for them (the Tories). Another law for us.”

But the man he wished ‘best of luck’ to, Mr Marshall, has long been controversial, and the abuse of senior politicians other than Mr Davies, form part of a pattern. 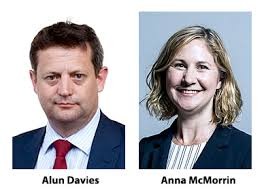 Mr Davies started his political career in PC, and the man he endorsed in his tweet, Mr Marshall, also has a widely publicised link to this party.

The ‘initiative’ by Mr Marshall which Mr Davies praised, is also contentious.

It is called New Media Wales (NMW), with the pilot dubbed The News Wales (TNW) [which was wished “best of luck” by Mr Waters], and Mr Marshall has ‘partnered’ with the huge Newsquest Media Group (NMG), which has made many of his supporters uneasy.

One said on Twitter “for me it’s important to be owned and run in Wales”.

Another declared:  “He’s (Mr Marshall) been saying for a while that there is a “Partner” on board……I assumed that it was a local, welsh business……but it does indeed look like it is News quest! !”.

A further critic said on Twitter: “Why are we having to use a London based company?”, while a different detractor declared on the social media site: “Gotta be honest, a London-headquarterd media outlet is not at all what I thought I was supporting, purported editorial freedom or nay.  I have some reasonably major reservations”.

The holding company of NMG is Gannett which is an American mass media firm headquartered in McLean, Virginia, in the Washington, D.C., metropolitan area, and is the largest U.S. newspaper publisher.

As NMG it owns a host of Welsh titles including The South Wales Argus, but has regularly hit the headlines for the wrong reasons

Perhaps mention of “dire conditions facing journalists” and disclosures that the ‘comedian’ behind the “initiative” ‘welcomed’ by Mr Davies, made sick ‘jokes’ about a murdering gunman, used bad language to abuse publicly leading figures, was investigated by the police, and has been reprimanded by a social media company might make a senior Welsh politician think again before endorsing him on Twitter.

But apparently not for Mr Davies…

The memories of The Eye’s Editor Phil Parry’s astonishing decades-long award-winning career in journalism (before the advent of NMW or TNW) as he was gripped by the rare disabling condition Hereditary Spastic Paraplegia (HSP), have been released in a major book ‘A GOOD STORY’. Order the book now!