A ‘comedian’ who uses social media to back openly a contentious political cause, condemned people who voted Conservative, described a Prime Minister as an “arsewipe”, and says “fuck” publicly regularly, has been rewarded with a show on Wales’ only national English-language radio service, it has emerged.

The ‘funny man’ Mike Bubbins now presents a Saturday afternoon programme on controversial BBC Radio Wales (RW), but senior officials at the corporation say it is simply a Welsh version of a UK transmission, and staff believe it is a way for the station’s head to stay in favour. 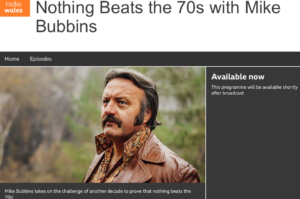 Other presenters at RW have also hit the headlines for the wrong reasons in the past, however it is the online comments of the man placed on air now, that are prompting the most disquiet. One staff member told The Eye: “The perception is that he (contentious RW Editor Colin Paterson) is just going through the motions after he failed to secure promotion”.

A former senior executive with the corporation, said about the programme ‘Nothing Beats the 70s’ fronted by Mr Bubbins: “It’s a complete rip off of ‘Sounds of The 70s’ with Johnnie Walker on Radio Two and a desperate effort to mirror Owen Money’s core audience appeal (plus 60). Let’s hope Bubbins has more traction than at a Radio Wales celebration performance at The Grand Theatre, Swansea several years ago when he bombed on stage!”.

Remarks like these come amid mounting concern at what Mr Bubbins has been saying on social media. In reply to a message about the Grenfell Tower tragedy by former UK Prime Minister Theresa May, he said on Twitter: “The people they’re fighting, day in, day out, are your government, made up of you and your mates, who are still refusing to replace the exact cladding which caused the Grenfell tragedy on many other tower blocks, you shameless, disingenuous, arsewipe.”

In another tweet he made clear his support for Welsh independence: “Love Wales? Love these beautiful British Isles? Hate Westminster? There is another way…” hashtag YesCymru (Welsh independence movement) emojis heart and Welsh flag.

But Welsh independence is a highly alarming issue for some families. A poll earlier this year, for the ITV News Tonight programme and carried out with research company Savanta ComRes, suggested that, 61 per cent of people would vote ‘no’ in a referendum on independence for Wales.

Many of them could also be potential listeners, to increase the record-low audience figures at RW.

For many years the number in favour of independence remained static on roughly 10 per cent, and numbers are likely to be squeezed further during a referendum campaign.

It is evident that Mr Bubbins is also a supporter of the contentious rugby commentator (and former Welsh international Jonathan Davies). On Twitter he has advised ex-players anxious to break into punditry, to: “Listen to Jonathan Davies doing it on @BBCSport”.

However Mr Davies’ commentary style is controversial. He called fans who opposed him “bell ends”, was filmed spraying a fire extinguisher into the face of a celebrity friend, faced a barrage of criticism during an international game in which the referee was French, highlighting a past broadcast comment that for him this meant “anything could happen”, and has been described on Twitter as a “moron” a “total disgrace”, as well as “awful”.

One rugby follower, said he wanted to rip his ears off “every time (Mr Davies) opens his mouth”. Another television viewer of a match said:  “@BBCSport can you please stop Jonathan Davies from having an input into ANY rugby commentary! It’s painful! I’ve had to turn the sound off and listen to Radio commentary of the game”.

Even after showing his support for a commentator described in this way, a further announcement on Twitter by Mr Bubbins made obvious his opposition to the governing party in Wales, Welsh Labour, despite his professed neutrality. He wrote:“I’m not pro any particular political party, but I will say that you’d be hard pressed to find a more out of touch, unaccountable, doddery bunch of incompetent bellends, and lifelong gravy train riders than the berks of @WelshLabour in the @WelshGovernment. Roll on the elections.”.

Other tweets by this ‘comedian’ on RW, have also been headline-grabbing, and according to some who have seen them, not funny at all. Mr Bubbins proclaimed: “I think its fair to say that the large numbers of working class people in the North of England and Wales who voted for the Tories in the last election, might not be so fucking stupid the next time around.” (emoji smiley face).

He has declared about a former Welsh secretary: “And @AlunCairns is a total penis. But Americans couldn’t care less about the fact.” (emoji smiley face).

These tweets, though, may prove problematic for the majority of voters in Wales (who vote either for the Conservatives or Welsh Labour at elections), and are presumably, too, some of the listeners RW want to attract, to boost flagging audience figures.

But Mr Bubbins is no stranger to controversy.He became the face and voice of an official Welsh Government education scheme that helps children and their parents, even after he was severely reprimanded by a social media company when he called an MP “a c***” (spelt in full). 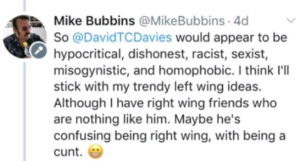 Mr Bubbins said about Monmouth MP David TC Davies that he would appear to be “hypocritical, dishonest, racist, sexist, mysogynistic and homophobic… Maybe he’s confusing being right wing with being a c***” and ended the outburst on Twitter with another smiley face emoji.

Plainly Mr Davies has incurred the wrath of Mr Bubbins, because he is a regular target of his ‘humour’.

He said on Twitter in reply to Mr Davies: “Did this involve breaking the law by spending much more on it than is legally allowed? If not, you’re on thin ice. You chinless berk.” (smiley face emoji).

Mr Bubbins’ victim, Mr Davies, has been an MP continuously since 5 May 2005, and currently holds the UK Government posts of Parliamentary Under-Secretary (Wales Office), as well as Assistant Whip.

Mr Bubbins has, too, condemned on Twitter the “rank hypocrisy” of Boris Johnson’s former aide, Dominic Cummings, who masterminded the Conservatives’ winning General Election of 2019.

He wrote sarcastically and shockingly on the social media site about Mr Cummings’ trip to Barnard Castle during lockdown, that he was “Appalled but unsurprised to read about Dominic Cummings’ rank hypocrisy. But appalled and surprised to learn that somebody willingly let Dominic Cummings erect penis inside them and leave it there until it ejaculated.  Absolutely shocking behaviour.”.

Yet despite this kind of language, Mr Bubbins was used by the ‘Welsh Government’s Education Begins at Home’ campaign, which stated:  “The Welsh Government want all children to have the right skills to face a changing world. A good education is an important part of that”.

The scheme tries to set a good example to parents with small children, and on Twitter announced: “Welsh Government’s Education Begins at Home provides information on how you can support your child at home & help their performance in school @dechraucartref”.

Officials published a link to their podcast which declared:  “Comedian Mike Bubbins asks Ysgol Bro Morgannwg teacher Catrin Bennett what parents can do…”.

But the website of this ‘comedian’, which was called “The Retrosexual Male”, stated:  “… I did some things I wouldn’t do now, things I’m not proud of. But you do when you’re young. And, anyway, that’s what the twin tub washing machine was for…Takin’ Care of Business.”.

Mr Bubbins was also a teacher, and he has starred in BBC Cymru Wales’ (BBC CW) Tourist Trap, but his proposal for a school sitcom was rejected by officials there.

Executives at the corporation might also reject one of their presenters backing online a contentious political cause, condemning people who voted Conservative, describing a Prime Minister as an “arsewipe”, and another senior politician a “penis”, as well as saying “fuck” publicly regularly.

Or perhaps that sort of language is seen as ‘edgy’, and a way to increase the lowly audience figures at RW…

Tomorrow – more disturbing revelations about another Welsh nationalist, who is responsible for a new ‘national’ newspaper, and posted ‘revolting’ pictures online.

The memories of our Editor, Phil Parry’s, astonishing decades long award-winning career in journalism (which has also provoked enormous abuse) as he was gripped by the rare neurological disabling condition Hereditary Spastic Paraplegia (HSP), have been released in the important book ‘A GOOD STORY’. Order the book now!