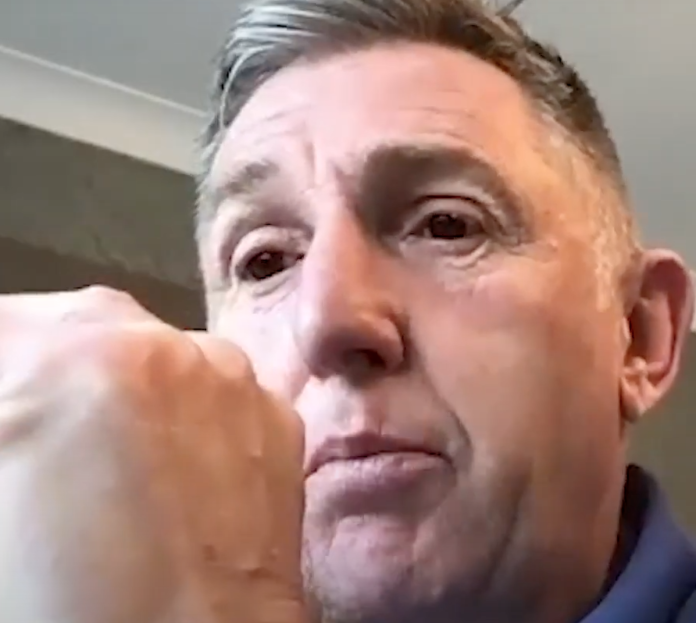 A huge deluge of critical comments came amid the Wales game against Ireland about a controversial rugby pundit employed by The BBC who used foul language on social media to abuse publicly a fan, called others “bell ends”, and was filmed spraying a fire extinguisher into the face of a former international referee, The Eye can reveal.

But Mr Davies has used bad language himself, and sometimes against rugby fans. Recently he said on the YouTube podcast ‘Jiffy and Stubbsy’ that he was “saddened” another contributor was not using social media, adding:  “I don’t give a monkey’s about the bell ends…”.

In another episode of the podcast, Mr Davies said:  “If I say something, all of a sudden, people write a tweet and go ‘he should be sacked’ and copy in the BBC”. It has also emerged that earlier he had told a rugby fan on Twitter:  “fuck you and your lads’ cock”.

After seeing Mr Davies’ tweet and comment on YouTube, a leading sports journalist who supplies material for UK publications, told us:  “He (Jonathan Davies) really is a disgusting individual”.

But he appears to be nervous about some of the reaction he receives on social media, although it seems that much of the criticism may be valid, and Mr Davies, who is an extensive user of Twitter, has rarely been far from the headlines for the wrong reasons

Conspiracy theories have a long and disturbing history. They are particularly relevant now after the US Presidential elections, with Donald Trump seizing on conspiracy theories to say the Democrats ‘stole’ the election but providing no evidence to support his baseless charge that there was ‘mass fraud’.

In the spring, masts in Britain, the Netherlands, Ireland, Australia and New Zealand, were attacked, with fire damaging 100 masts in the UK alone. There were 20 strikes over the Easter weekend, including one on a mast serving a Birmingham hospital. It appears the arsonists believe that radiation from 5G masts cause coronavirus/Covid-19, while in fact people are exposed to more radiation by standing beside baby monitors.

The UK Government is worried too about militant ‘anti-vaccination’ (‘antivax’) groups which might disrupt the roll out of a vaccine to protect people against coronavirus/Covid-19.

Conspiracy theorists have claimed, too, on Google and Twitter, that the pandemic was a cover for a plot by billionaire Bill Gates to implant trackable microchips into people, although social media companies have grown uncomfortable about hosting this sort of false information.

Yet the commentary style of Mr Davies has also come under fire – this time before, during and after The Challenge Rugby League Cup final.

Earlier howls of outrage on Twitter had greeted news of his inclusion in rugby league presentation teams, including:  “Jonathan Davies ruins these games for me”. There have been complaints on social media about his mispronunciation of ‘Salford’, he has been described as a “dipshit”, and one rugby league fan said “Why do we have 2 have Jonathan Davies on rl 4BBC” with a picture of an upset emoji after the comment.

Warnings were also repeated about the hazards involved in the misuse of fire extinguishers after experts were shown shocking pictures from a video of Mr Davies using one to spray into the face of former international referee Nigel Owens, as he sat in his car while another person filming the dangerous stunt laughed. This too was posted on the internet.

Behaviour like this, though, as well as Mr Davies’ comments sit uncomfortably with the new guidelines announced by BBC Director General Tim Davie which tell presenters: “…don’t express a personal opinion on matters of public policy, politics, or ‘controversial subjects’”.

Tomorrow – the enormous protests over the number of ‘unconditional’ offers given by a Welsh university.