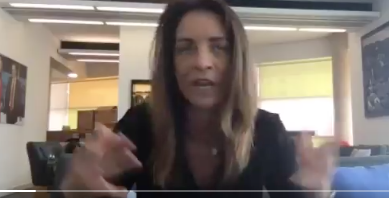 A controversial outspoken TV sports commentator in Wales has enraged fans with her remarks on social media and several have said she should stop “moaning”, it has emerged.

One angry critic has stated: “… we all know what pc agenda you are trying to push…”

ITV Cymru Wales’ Beth Fisher has abandoned all pretence at neutrality and openly supports women’s rights as well as people in the LGBTQ+ community.

Another person tweeted:  “A little note about being humble … Instead of moaning and whining, do your job”.

Ms Fisher is a former international hockey player and campaigns publicly for diversity in sport as well as gay rights.

On Twitter she has publicised the charity Refuge which helps women and children enduring domestic violence, with a helpline number.

She has, though, divided opinion and receives substantial backing from other sports fans, including the Labour mayor of Manchester.

Recently Ms Fisher posted a film of herself supporting a woman who appeared on television from the TV programme Love Island who is a “huge Arsenal fan” :  “In my view they subjected her to stereotypical banter”, she declared. “… and she was asked, you know, who she would like to marry…”.

Since retiring from sport she has worked as a commentator, reporter and presenter for a range of broadcasters covering international football, Premier League, Championship and League Two football, International and Pro 14 rugby, the Cardiff Half Marathon, International Cricket, Hockey, Ice Hockey, Netball and the 2018 Gold Coast Commonwealth Games.

Ms Fisher has also been a board member of Welsh Cycling and has worked for several national governing bodies of sport.

When she joined ITV Cymru Wales last Summer it was clear that officials were pleased with their catch.

Wales at Six Editor Dafydd Jones said: “Beth joins us at a thrilling time in Welsh sport. She is bursting with ideas for how to make our coverage fresh, distinctive and compelling.

“She lives and breathes our ethos of telling sport through communities and people.

“She will bring something genuinely unique to our programme and I can’t wait to start working with her.”

Ms Fisher was also enthusiastic about her new job, and proclaimed: “It is a dream come true to be joining ITV Wales as their new sports reporter! It is an exciting new chapter in my broadcasting career”.

Evidently the detractors and supporters of her forthright views on Twitter are also excited, but perhaps not in the way her superiors first imagined…

Tomorrow – the techniques our Editor Phil Parry needed to know as an investigative journalist.

The memories of his astonishing 36-year award-winning career in journalism (including some of the controversies he has uncovered) as he was gripped by the rare neurological disabling condition Hereditary Spastic Paraplegia (HSP), have been released in a major book ‘A GOOD STORY’. Order the book now!