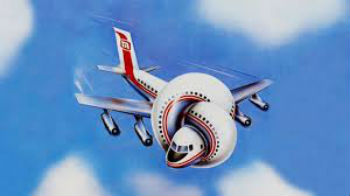 More difficult questions have again been posed about the Welsh Government’s (WG) ownership of Cardiff Airport (CA) when the First Minister of Wales (FMW) has announced a new climate change ministry saying “The environment will be at the heart of our decision-making”, and the Welsh health minister has urged families to ‘holiday at home‘.

The new ministry was revealed by FMW Mark Drakeford, when he unveiled his new-look cabinet after the elections earlier this month, which were disastrous for Labour at a UK level, and his health minister, Eluned Morgan, has proclaimed: “Enjoy everything Wales has to offer”.

Yet this statement and action, may prove problematic for the public ownership of CA, when air travel is a known contributor to ‘the climate change emergency’ that Mr Drakeford has also mentioned.

One leading political commentator told The Eye: “What is going on?! This is EXACTLY what someone in the public eye shouldn’t do. Everyone will see straight through it”.

This apparent contradiction in official policy also puts centre stage other controversies highlighted only by The Eye.

CA has linked up with state-controlled Qatar Airways (QA) and that has been tricky for the airport, with flights now suspended.  The UK Government also told potential travellers to the country they faced major risks, and it stated on its advice website:  “Terrorists are likely to try to carry out attacks in Qatar“.

Meanwhile Qatar’s successful football World Cup bid has also prompted major questions, putting under more strain the relationship with CA. The Sunday Times, has disclosed that the tiny desert state had secretly offered £400 million to FIFA just 21 days before the disturbing decision was announced to hold the 2022 football World Cup there.

Despite the mounting evidence, CA’s association with QA was widely welcomed, both by the mainstream media and among prominent Welsh politicians.

The flight to Qatar’s Hamed International Airport was described positively in the South Wales Echo for providing “capacity for 150,000 passengers a year, as well as significant freight capacity for Welsh exporters at around 10 tonnes a flight”.

The same praising word was used by the Chief Executive of CA at the time, Deb Bowen Rees, who told the South Wales Echo:  “The Qatar Airways service has been transformational…”.

In interviews, Carwyn Jones (First Minister of Wales when the ‘transformation’ was announced) stated:  “We would like to work with his excellency (Akbar al Baker the Chief Executive of QA)“, and tweeted that he “welcomed” the first QA flight into CA saying that it represented a “huge boost” for Wales. The then Welsh Secretary Alun Cairns informed us:  “The new flight from Cardiff to Doha plugs our entrepreneurs straight into one of the most dynamic economies in the Middle East, and an airport which offers a further 150 global destinations”.

But it has not simply been the contentious alliance with an airline controlled by Qatar which has been alarming, when Mr Drakeford has declared a ‘climate change emergency’ and one of his ministers has urged people to holiday in Wales – there has also been the money.

It was to receive another £6.8 million, after getting a ‘loan’ of £21.2 million the previous year, which was itself an extension on the £38.2 million the airport could already ‘borrow’ from the WG, coming on top of the £52 million of the public’s money used to buy CA in the first place.

Welsh Conservative MS Russell George, who speaks on transport issues, said: “This is good money after bad. Tot up the purchase price of £52 million, the current £38.2 million loan, and last year’s £21.2 million loan, and the airport could be in hock to the taxpayer to the tune of more than £110 million since it was bought by the government in 2013. This is unsustainable…”

Andrew RT Davies MS for South Wales Central (and leader of the Welsh Conservative Party) said:  “… this typifies how rudderless this Labour Welsh Government currently is.  One minute they’re cancelling an M4 relief road that would help boost Rhoose citing environmental factors, then declaring a climate emergency, and now they’re chucking millions at an airport. Shambolic. Wales deserves better than this chaotic and slapdash management of our economy.”

Perhaps there is, now, more evidence that ‘Wales deserves better’ when a new climate change ministry has been announced, with the fanfare: “The environment will be at the heart of our decision-making”, and a WG minister has told people to holiday in Wales, but officials own an airport…

Tomorrow – internal sources at the BBC say the ‘independent’ complaints review set up after the Martin Bashir scandal, isn’t independent at all.

Our Editor Phil Parry’s memories of his astonishing decades long award-winning career in journalism (which did NOT involve welcoming news of an airport linking up with a contentious state airline) as he was gripped by the rare disabling condition Hereditary Spastic Paraplegia (HSP), have been released in a major book ‘A GOOD STORY’. Order the book now!