Here our Editor Phil Parry looks at how strong journalism is harmed by successive scandals at the BBC, with the latest one emphasising this fact, and the way it has been underlined by the unbridled enthusiasm shown by the editor of Radio Wales at winning a bronze award in the local radio category.

Good journalism often needs to be nurtured in strong and supportive institutions.

Yet this is now undermined by what has happened at the BBC – both with the Martin Bashir/Princess Diana affair (see story tomorrow), and now by the nauseating enthusiasm exhibited by the contentious BBC Radio Wales (RW) Editor Colin Paterson at winning the BRONZE award in a LOCAL radio category.

After 10 years presenting the now-ditched BBC Cymru Wales television Current Affairs series Week In, Week Out (WIWO), my next longest stint with the broadcaster was seven years presenting news programmes for BBC Radio Wales (RW). I have also made several BBC Two Newsnight films, as well as fronted Panorama investigations, so I look on with growing alarm at what has happened.

It hasn’t just been the lengthening list of scandals which has worried me (all good fodder for critics who want, anyway, to dispense with the licence fee), but the relentless dumbing down of programmes, and the way that awards which otherwise should be quickly forgotten about, are instead seen as a great triumph. 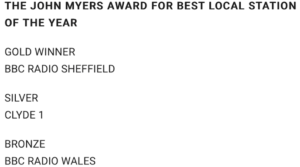 For example, the controversial head of Wales’s only English-language national radio station yesterday trumpeted its bronze award in a category for local services, despite the fact that gold and silver honours were taken by much smaller broadcasters with a fraction of the budgets. Mr Paterson posted Facebook (FB) pictures of the Radio Academy’s Audio and Radio Industry Awards (ARIAS) proclaiming about RW: “Bronze for radio station of the year!”. 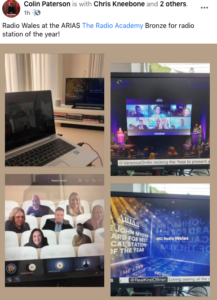 Yet gold in this local radio category was won by BBC Radio Sheffield (RS), while silver was taken by the small commercial station in Glasgow, Clyde 1.

The cost per listener for them both, shows that RW is in an altogether different division, with, for instance, the BBC spending about ten times as much on RW compared with RS. The Sheffield station has, too, a much smaller percentage of the production and studio staff than there is at RW.

Mr Paterson has, though, long been a headline-grabbing figure, and had earlier drawn attention to the number of nominations for ARIAS awards secured by RW. He declared on Twitter: “Delighted for everyone at @BBCRadioWales with two nominations including radio station of the year”, and the message was followed by emojis of a radio and a Welsh flag.

However the ‘Radio Station Of The Year’ nomination (and bronze award) was alongside stations such as BBC Radio Hereford and Worcester, as well as Metro Radio, when RW is meant to be the NATIONAL broadcaster for Wales.

Past events at RW could also become the subject of a comedy award at the ARIAS (for which RW was nominated as well). The radio station has been accused on Digital Spy (DS) of being “lightweight” and “a shadow of its former self”, with another critical listener saying there is a need to “stop the rot” while a further contributor said the trail for a new programme “sounds horrendous”. RW at one point returned to the top 20 radio topics with a growing list of condemnatory comments, but stories on The Eye were mentioned approvingly.

Yet this is not the first time the station has been confronted with critical observations on DS. One contributor to the online forum has said in the past that ‘Breakfast with Claire Summers (which replaced Good Morning Wales [GMW]): “… sounds like a community radio station bloody awful. Woman presenter has a grating voice and is fluffing her lines. Morning news programme should contain news”.

Other RW listeners who supplied statements to the forum were equally scathing about recent RAJAR listening figures. One said:  “I do get the impression that Ulster and Scotland do a good job of being part of their country’s internal conversation. I’m not sure that Radio Wales has the same status.”

Another listener complained strongly about RW saying the station was “littered with presenter led record programmes and chat”, and the complaint was sent initially to the First Minister of Wales (FMW) Mark Drakeford then passed to the Deputy Minister for Culture, Sport and Tourism (DMCST) at the time, Dafydd Elis-Thomas. It said: “… The station (RW) has lost 47,000 listeners in the last three months and has reached the point where 95% of the country never tune in. Over £18 million of licence payers money funds BBC Radio Wales for little or no return.”

Meanwhile our journalists have been alone in showing that Mr Paterson was having an affair with Lucy Owen, who declared the importance of travelling by bus in a tweet he ‘liked’, and has presented BBC Wales Today when programme-makers mistook Brighton Pavilion for a mosque. The story about it by The Eye was the one included in a DS comment about RW with the message above the link saying “…the record low listening figures at Radio Wales under it’s (sic) current management (were) amplified this year by criticism from former award winning reporters and presenters”.

But remarks like these are not the only issues which need to be addressed by RW Editor Mr Paterson, after he conducted his alarming affair. For many staff at BBC Cymru Wales (BBC CW) the relationship represented a huge potential conflict of interest because his officials had commissioned a RW programme hosted by Mrs Owen called ‘Sunday morning with Lucy Owen’, and media executives both inside as well as outside the corporation have told me that they were worried about their partnership’s possible impact on the process.

Mr Paterson’s performance too at RW has been open to question as the DS contributors have alluded to, and this may not even win a bronze award.

A recent RAJAR report made grim reading for him, coming as it did hard on the heels of other low audience statistics. In 2020 the figures revealed a slight increase on 2019 but a substantial drop compared with two years earlier, a massive decline on the year before that, and how more than 40,000 listeners had been lost in one three month period, despite a huge amount of money being spent on new schedules. They also showed that the total listening hours were 2,667,000, down from 3,074,000 in September 2019, although up from 2,147,000 in December 2018, and the market share was just 5.5 per cent.

After these numbers were published, a prominent figure described online as one of the main presenters at RW during its launch, renewed his call for Mr Paterson and his superior, the Director (also Director of Nations), Rhodri Talfan Davies, to resign.

Mr Flynn was equally unimpressed by our revelation of Mr Paterson’s affair with Mrs Owen. He told us: “If Paterson has been having an affair with a Wales Today and Radio Wales presenter it brings his management skills in to question and he needs to be suspended immediately”.

But this disturbing pictore is painted against the backdrop of a huge shake up in the line up at RW as Mr Paterson has struggled to combat the low audience figures. He has described the new line up as a “creative challenge” and the RAJARs have made the scale of the challenge clear. Among the changes that were announced in a bid to stem the tide of disastrous listening statistics was the new breakfast programme hosted by different presenters on Monday to Thursday, to Fridays and Saturdays.

Apart from presenting BBC Wales Today and in the past the RW programme, Mrs Owen also hosts the BBC Wales (BBC W) consumer affairs programme ‘X-Ray’ with her husband, Rhodri. She has published a book which raises funds for the Noah’s Ark Charity for the Children’s Hospital of Wales called ‘Boo-a-bog In The Park’.

Mrs Owen has announced: “The story is about how a little boy gets though a situation that is challenging for him with the help of an imaginary friend. But it’s all about finding any way through a difficult time or situation. It’s been a real family affair, with Rhod translating, and Gabs (eight year old son) came up with idea for Boo-a-bog fun and games at the end of the book. And the link to the charity as well makes it extra special for us.  The theme of the story feels a good fit with the charity.”

She has also appeared on stage at the World Book Day (WBD) show, but this is unlikely to get even a bronze award at the ARIAS, when her former paramour has presided over record-breaking low audiences…

Tomorrow – internal sources at the BBC say the ‘independent’ complaints review set up after the Martin Bashir scandal, isn’t independent at all.

Our Editor Phil Parry’s memories of his extraordinary 37 year award-winning career in journalism (23 of them at the BBC with seven at Radio Wales) as he was gripped by the rare disabling condition Hereditary Spastic Paraplegia (HSP), have been released in a major book ‘A GOOD STORY’. Order the book now!