Home News Kicking the ball into the long grass 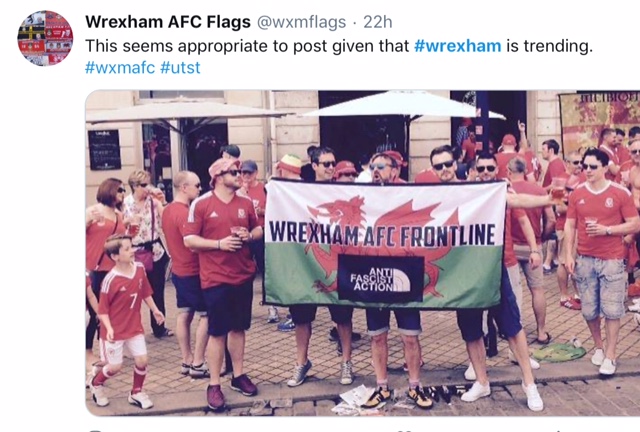 Angry Welsh football fans have received no substantive response from the game’s governing body in Wales about “extremist Welsh nationalist groups ‘tagging on’ to the Wales national football team on social media”, and a controversial supporters’ brass band which denied calling a politician a “lying cunt” even though we have found the evidence, The Eye can reveal.

Now a former director of one club in Wales has called on the man in charge to resign.

On May 27 last year the fan followed up his earlier demand for action from the Football Association of Wales (FAW) by telling them: “I have continued to experience harassment from certain groups… Can you please respond to the concerns?”.

In documents we have seen, a reply from the FAW was simply:  “I have not discussed fully with (Chief Executive) Jonathan Ford. When I returned from holiday he went away on his…I have followed up on the issues raised but need to talk to Jonathan first.”

After such a long delay without a full reply, the former director of the Welsh football club has now told The Eye: “In my opinion the head of the FAW needs to resign over this”.

The accounts of the FAW also make for interesting reading.
On July 31 last year EIGHT directors had their contracts terminated on the SAME day.

In a BBC Sport Wales interview Mr Ford had said: “We have always favoured Welsh people because arguably the passion is there.

“Somebody said this earlier, Welsh most definitely, foreign possibly but definitely not English.”

Apart from telling Nigel Farage on Twitter that he was a “lying cunt”, the Welsh football team supporters’ brass band The Barry Horns also proclaimed about Brexiteers on Twitter “fuck you”, and declared about a UK cabinet minister “Go fuck yourself you Tory bastard“.

In December last year the angry football fan also outlined to the FAW a series of problematic issues: “The Barry Horns have had their official Twitter account shut down for foul and abusive behaviour, and repeated violations of Twitter’s terms and conditions. They then set up another account, which was shut down within a week.

But the FAW have been at the centre of a storm of controversies before. Past issues have included further accusations that officials have failed to do anything about extremist ‘supporter’ groups and The Barry Horns.

Another outraged fan has also asked in the past: “I would like to know what the FAW position is on the Barry Horns who having affiliated themselves to South Wales football now appear to have adopted an aggressive political agenda.

“Some of their language on Twitter is worse than I have ever endured on football terraces. Is this the sort of agenda the FAW condone?”, and action was demanded from the FAW. Neither, though, have received a reply. The ‘Tory bastard’ comment was hurled by The Barry Horns on Twitter at the then UK Health Secretary Jeremy Hunt.

The band were barred from the social media outlet following remarks like this, and after the ban was lifted said that they were “beautiful”, yet serious questions have been raised about this contentious decision.

They clearly support their party because before the Twitter ban, they exhorted followers to “Join @Plaid Cymru”.

Their first public appearance was outside the Wales v England World Cup qualifying match in Cardiff on 26 March 2011.  They also appeared at the Welsh Cup Final in the same year, which was broadcast on television.

In March 2017, they were banned, too, from the Republic of Ireland v Wales World Cup 2018 qualifying match in Dublin. In September of the same year, they gave a headline performance at the first Welsh Independence music festival in association with Yes Cymru, held at Clwb Ifor Bach in Cardiff.

That month The Barry Horns also gave football fans from North Wales a surprise welcome to Cardiff with a performance at Cardiff Central Station ahead of Wales’ match against Austria at the Cardiff City Stadium. At the time they declared: “The Horns couldn’t wait to greet the train upon its arrival to Caerdydd. Next stop – 3 points!”.

The controversial broadcaster BBC CW has also found itself brought into the growing row.

BBC Radio Cymru (BBC RC) and the BBC National Orchestra of Wales (BBC NOW) were due to stage the ‘Red Wall’ with The Barry Horns at Pontio in Bangor, although the venue was closed due to coronavirus/Covid-19.

Football in Wales has long been contentious, and recently the North Wales town of Wrexham has been at the centre of an extraordinary row. The FAW were founded in Wrexham, and earlier The Eye exclusively revealed how the violence of some supporters of Wrexham AFC in Manchester, was celebrated by a dissident republican group linked to a militant organisation allegedly behind the killing of a journalist.

An alarming post on Twitter from ‘Saroadh PR’ said that some fans of the Welsh football club “beat the absolute shit out of Tomy (sic) Robinson (former English Defence League [EDL] leader) far right fascists” and backed the message with a picture of men in balaclavas holding guns aloft. The tweet outlined a series of mundane actions which included waking up early and taking a train to Manchester before the violence.

It then proclaimed:  “All in a days work for the Welsh lads” – 197 accounts retweeted the message and more than 1,200 accounts liked it.

Our journalists on The Eye have been alone in bringing out controversies like these.

You will only find them reported here…

Soon – disturbing revelations about a controversial outspoken sports TV reporter in Wales who has been urged on Twitter to ‘stop moaning’.

Our Editor Phil Parry’s memories of his extraordinary 36-year award-winning career in journalism as he was gripped by the incurable neurological disabling condition Hereditary Spastic Paraplegia (HSP), have been released in a major book ‘A GOOD STORY’. Order the book now!

The Eye - 7th July 2020
%d bloggers like this:
We use cookies to ensure that we give you the best experience on our website. If you continue to use this site we will assume that you are happy with it.OKNORead more